Boxers Jack Cullen and Jack Flatley both became English champions, at middleweight and super welterweight respectively, on 11 May after a thrilling night of fighting at Bolton’s ‘University of Bolton’ Stadium. 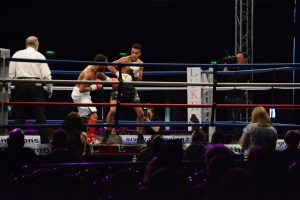 oXyFire Media worked with PHA Broadcast, which supplied four Sony HD W-750s and one XF305 for the boxing at Bolton’s ‘University of Bolton’ Stadium

The production company, oXyFire Media, partnered with Code Delta and PHA Broadcast to live stream the action to more than 160,000 global viewers watching on vipboxing.tv and social media, while also providing a separate ISO record for KO TV.

Telling us how it went down, oXyFire creative director Jay Rozanski said: “We’ve worked with VIP [the promoter] for almost a decade now, and it’s always an exciting night of small hall boxing. This one was no different with Flatley’s match, in particular, being a close call.”

“We had five cameras in total,” continued Rozanski. “PHA Broadcast supplied four Sony HD W-750s and one XF305.” Two of the Sony cameras were positioned on tripods on the balcony while the other two were ringside in the neutral corners, wireless and shoulder mounted. These also acted as interview cams between matches, and the fifth camera was a wide fixed beauty shot, again on the balcony. 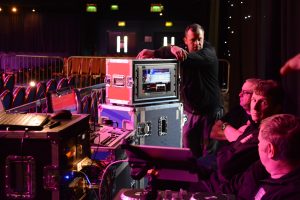 “It was important to work quite closely with the lighting and noise crew from WH Leisure to ensure even lighting across the ring,” added Rozanski. “For this particular venue, the height of the balcony meant that the lighting rig needed to be quite a bit wider than normal, so as not to obstruct the view of the cameras. We also made sure AV had a SmartView 4K monitor so they could view the TX.”

At the back end of the workflow, Rozanski and the oXyFire team relied on an ATEM 1 M/E Production Studio 4K and ATEM 1 M/E Broadcast Panel for vision mixing. He added: “The main aim when cutting between cameras is making sure the referee is always in the background. They constantly move around the fighters, so from a live directing point of view, it’s imperative to keep your eye on the action at all times. We had the ATEM’s multiview blown up on a big screen to assist with this.” 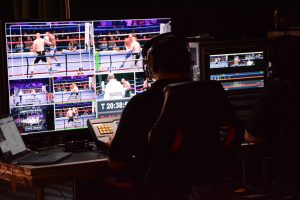 A For-A FA-505 was used for shading, and a custom built solution developed around CasparCG and DeckLink Duo cards was used for graphics and slow-mo replay. “This is something we wouldn’t have been able to do without Blackmagic’s open SDK,” explained Rozanski. “Coupled with expert advice from CVP, we’ve been able to create a bespoke system, which is something I never thought would be possible.”

The TX was then fed into a LiveU Solo+, which bonds several internet connections together to form a single super connection, allowing the team to have an adaptive bitrate stream over RTMP. oXyFire had 4 SIM cards, WIFI, and a venue ethernet, so if one connection proved weaker or dropped out, the others would be used.

The RTMP feed then went into Wowza’s streaming engine, acting as a pass-through service, before being distributed out to the various channels (the promoter’s website and socials, as well as Boxing Exposed and Only Full Fights on Facebook).

“The quality of our live broadcasts has seen other broadcasters wanting to take our feed,” noted Rozanski. “For this show, we used a HyperDeck Studio and BMD Audio to SDI embedder to record optional audio mixes on SDI channels 1 through 8, giving us an international mix, without commentary, for KO TV. Again it’s something we wouldn’t have been able to do without Blackmagic, as the cost of other audio embedders was just too high.” 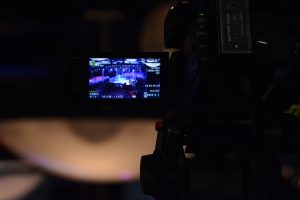 Alongside streaming the fight nights, Rozanski also produced a behind the scenes live stream for students (or anyone else interested,) to follow along on Twitch and learn how it is done. He explained: “This was a simple multiview feed with an additional over-layed camera angle pointing into our gallery, as well as the audio from our comms, giving viewers a real life demonstration of vision mixing that they probably wouldn’t normally have access to.”

“Having reliable equipment is key to any live production,” concluded Rozanski. “And that reliability, combined with broadcast quality, doesn’t have to come at a premium anymore. We have the people, we have the knowledge, and Blackmagic Design allows us to put all of that to use.”