PacTV packs in plenty of services at new London facility 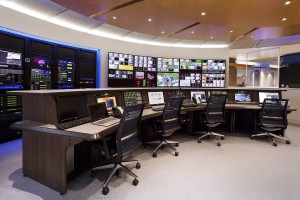 London PacTV: The monitoring wall has been specially designed to PacTV’s specification and consists of Samsung displays

During just one weekend earlier this month the London facility of Pacific Television Center (PacTV) handled feeds from close to 20 different sporting events in the UK and beyond. Those events included cycling, Premier League football, rugby, cricket motor sport and canoeing. And the destinations for those feeds were just as varied.

“We have clients from all over world,” states Richard Neri, president of PacTV. “We are broadcaster-centric, so whether they are here in the UK, in Europe, Australia, New Zealand, Asia – wherever – our services are available for their use.”

The company was started 35years ago in Los Angeles to provide round-the-clock services such as connectivity, satellite co-ordination, live inserts, voiceovers, and transmit and receive facilities.

Today, as well as Los Angeles, PacTV has operations in New York and London, with hubs in Washington DC, Sydney, Auckland, Toronto and Singapore. Within the last month, the London operation has moved to a new 4000 square feet facility close to the capital’s Silicon Roundabout, just north of the city.

“We started in London in 2004, and the original facility was on a street not too far from the financial centre of the city of London,” explains Neri. “But somewhere along the way, the street became pedestrianised and clients were finding it difficult to visit us. Not only that, we had outgrown our facility with the increasing workload and number of clients and there was no space for us to expand.”

He added that another benefit of the new building was the ability to secure the roof rights, and that opened up opportunities to install satellite dishes. Currently, there are six in place, two others in the planning stage.

Central to the new facility is the Master Control Room (MCR). Here a total of 22 lines are available to and from BT Tower. “Now that we have been able to equip a bigger room, we can monitor better,” declares Nick Castaneda, PacTV’s vice president, development. “When we can monitor better we can manage more signals. And when we can manage more signals, we can better interact with content. In the old facility, we were physically constrained, but now we can offer more services, and put more tools in front of our operators. And that means we can be more efficient.”

The monitoring wall has been specially designed to PacTV’s specification and consists of Samsung displays. Four operator workstations are provided along the desk. “The set up allows us to expand our MCR services as clients come along with additional requirements. Those clients can be either part of a regular contract or we are happy for ad-hoc work, too,” says Castaneda.

As well as lines to BT Tower, MCR has direct fibre connections to Globecast UK, ITN, BSkyB, AuBC and Actua Paris. “Our job is to receive, send and find ways to manage,” states Andrew Nealon, director of sales and strategy, Europe. “It’s the level of service that we set ourselves for clients. We try to get good business and do it well.”

Part of that service involves a dedicated Trilogy Communications’ intercom system that has permanent links with our major clients and other frequently used facilities. It is simply a case of an immediate one key contact with, for example, Sky New Zealand and Fox Sports Australia.

He says that PacTV is not currently involved with the actual production of large events, such as global distribution of the Olympic Games, but it does aggregate the contribution content for its global customers. “We offer a global footprint so, for example, with the current Ashes series test matches, we take the Sky Sports output and feed it directly to Sky NZ straight down our network. At the same time we could be sending them, maybe, up to seven other events.”

The facility can access material that may be available on its teleports in the UK, North American, Asia or Australia through its affiliates in that country. “We can basically fill up channels with content as and when it is required. In short, the pipes run hot with live content, all day, every day.”

To manage all the connectivity in and out of the facility, PacTV chose a Miranda 8500 Series router (NV 8576), featuring a 576 x 1152 matrix. This router is central to PacTV’s workflow and how it supports the diverse ecosystem of media deliverables for its clients. The Miranda 8500 Series allows the company to integrate video, optical and Ethernet routing all in one platform. As video and content changes between IP to fibre to uncompressed feeds, the new router will seamlessly integrate all of these mediums.

One feature of the PacTV service, which started in the United States in 2012, is its Downlinks On Demand (DOD) package. Neri explains that this provides clients with unlimited downlinks from a wide assortment of fixed satellites for a flat monthly rate. “This means clients are able to convert, what could be, a daunting variable cost into a very manageable fixed value. Last year, through a strategic alliance with MediaCorp, we expanded the product offering into Singapore. Now that we have our new London office, the DOD portfolio is available here as well.”

Neri continues: “Downlinks on Demand integrates client router systems with PacTV’s, allowing customers to select which satellite they want and automatically log the switches into their equipment. Clients can access their customer controlled ports via a GUI on a dedicated website utilising their own secure login details.”

CompuSat Satellite Control and Automation Systems by Image Communications manages PacTV’s RF router. While not included in Downlinks on Demand service, the other two steerable dishes in London provide an arc ranging from 37.5 degrees West to 45 degrees East.

“Steerable downlinks are available at an additional charge,” states Neri.

On the same floor as the MCR is the studio facility. “We wanted to remain in a city location because of the ease of access for our clients in the financial sector,” states Neri. “Not only can they reach us easily, but the talent we use – many of whom come from the West End – can also arrive quickly. That is important to us, because studio bookings represent a significant percent of our revenue.”

The move allowed PacTV to increase its number of studios from one to two – and increase the studio footprint overall. Both are equipped with Sony FS 5 cameras, which are 4K compatible while still capable of supporting current broadcast formats. It also adds a wireless functionality to its well-known broadcast camera control set. The cameras are mounted on Jimmy Jib hot heads and are controlled remotely from the MCR.

“We opted for Sony cameras and a vision mixer in order to keep continuity between our various operations and those of our clients,” declares Castaneda.

In the 210 sqft Studio 1, an 80-inch LG monitor can be used to show a background image behind the presenter/interviewee. In studio 2, a 65-inch Sony monitor is available for images. Both are fed from files on a Blackmagic Design Decklink server.

On the other side of the lenses, both studios utilise BBS Lighting Area 48 LED fixtures with interchangeable phosphor panels. A remote DMX is used for external lighting control. The lighting rig itself is from Doughty Engineering and has been built with sliders to enable lamps to be quickly and easily repositioned.

The entire facility is supported by Telco grade UPS backup and an on-site generator that allows PacTV to run for a minimum of four days without refuelling.

Neri concludes: “PacTV London is set to transform how companies manage broadcast media services. But the industry is changing, and we are already anticipating the next chapter and look forward to being at the forefront of the next wave in broadcast workflow with the opening of this upgraded facility.”