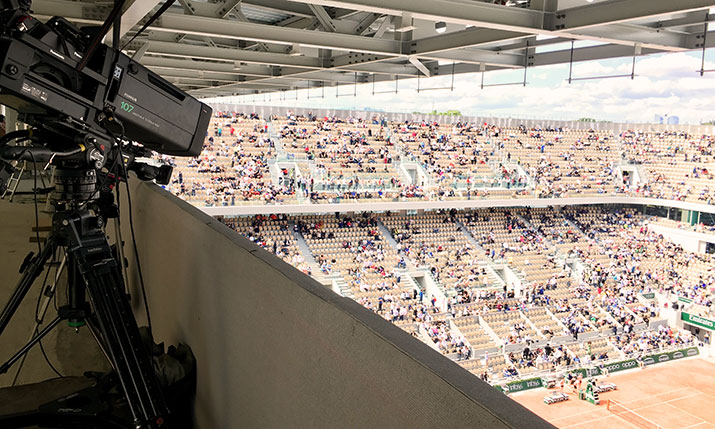 The ten AK-UC4000 camera channels and two AK-UB300 box cameras have been placed on Court Philippe Chatrier in order to provide pictures for the La Fabrique – Toulouse OB truck.

The La Fabrique – Toulouse is producing, in parallel, both the international HD signal and the Ultra HD video signal.

“This makes the camera systems well suited to the fast-paced filming across the tournament, and brings the audience even closer to the action.”

The AK-UC4000 can simultaneously output both HDR and SDR signals straight from the camera with both HLG and BT.2020 colour space support.

In addition to its regular broadcasts, France Télévisions is also transmitting a dedicated 4K channel for the duration of the tournament.

France TV Sport UHD 4K is running 24-hours-a-day, in partnership with the French Tennis Federation, on DTT, satellite (Fransat) and via Orange.

The 50fps production is being outputted in both SDR and HDR (Hybrid Log Gamma).

Eutelsat is providing transport and satellite, ATEME is responsible for the encoding of the overall signal while Fraunhofer IIS is behind the production and encoding of interactive and immersive elements with MPEG-H.

Technicolor and Cobalt are delivering the extended colour and high dynamic management of the Ultra HD video signal with TDF responsible for the terrestrial broadcast.

France Télévisions is also using Roland Garros as the venue to demonstrate 8K content over 5G in partnership with Orange.

The 2019 French Open at Roland Garros takes place until Sunday 9 June in Paris.