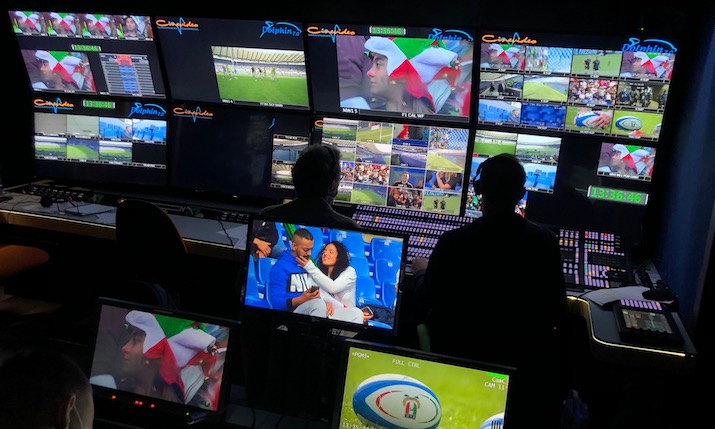 A trio of rugby test matches took place across Italy in November, with Sky Italy and Cinevideo opting for a particularly challenging camera plan.

The opener saw Italy take on the All Blacks at the Olympic Stadium in Rome on 6 November. This was followed by Italy versus Argentina at the Monigo Stadium in Treviso on 13 November and the visit of Uruguay to the Lanfranchi Stadium in Parma the following week.

While the final two games had a simpler deployment, the match in Rome featured 26 cameras placed on the field, including several for special shots.

The whole radio frequency section was handled by Elettronica Industriale with proprietary equipment.

“In terms of special shooting support, we used two Steadicams on the field, two gimbal shooting supports (behind each goal) with Sony FX3 cameras, the new ultra-compact models that create cinema-style shots, with film lenses and wireless connection, a Polecam and a BuggyCam,” he adds.

“At the four corners of the pitch were the cameras defined for the television match official (TMO). These are useful for the referee to check for any fouls, the validity of points scored and the various actions.”

There were also three cameras in the stands, one dedicated to wide shots, one to take tighter images and one to capture details with super narrow cuts. Among the other cameras, one was placed in the centre of the pitch, in the style of the ‘flat’ typical of football shooting, but in a raised position on a Hi-Lo platform two metres high.

Another camera, with long lens, was placed in reverse with Super Motion configuration and, for the first time in Italy, in the opposite position a BuggyCam was used.

A pilot operated this mini vehicle remotely and a second operator took care of the filming, thanks to a remote and wireless stabilised moving head from Movicom. 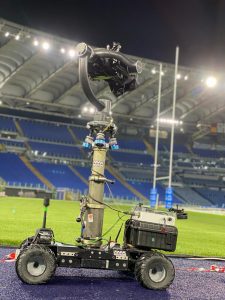 A BuggyCam was used for the first time in Italy

“This camera could move quickly back and forth along the opposite side of the pitch, following the action of the game with great dynamism and quite close to the athletes, in the centre of the action,” explains Buonomo.

“The production was carried out in HD and a camera in a beauty configuration placed at the top returned images at almost 180 degrees thanks to a fisheye lens.”

Cinevideo hired 60 crew members to follow the event and deployed the Dolphin 7.0 as an outside broadcast vehicle for control and main gallery direction. On board, ten replay operators managed 38 EVS XT-Via recording channels.

The set up also included four Panasonic PTZ cameras fibre wired and constantly aimed at the coaches positioned in the stands. The other two PTZs were mounted inside the lockers of the two teams to create exclusive images based on a strict protocol that controls their positioning and the times during which they operate. A television producer in contact with the replay technicians decided the moments in which it was possible to cut to these images. These cameras, followed by a dedicated operator with a green pass, are equipped with tally, to warn players when they’re on air.

The connections from the wired cameras to the control room main gallery were laid a day or two before the event.

In the press stand was a Cinevideo technician who was responsible for providing support to the two teams on the pitch, delivering six HD signals to each team and guaranteeing audio-video distribution to all broadcasters concerned. Riedel MicroNs were used for distribution.

In addition to the typical microphone that follows in stereo the footage of the cameras on the pitch and the action of the game, the audio footage in Rome also wanted to capture the All Blacks’ traditional pre-game haka.

Two radio microphones were placed on the pitch and then removed before the match to capture this intense moment.

Also on this production, Sky produced its own customised feed, carried out on board the Dolphin 7.0, which is equipped with two independent production areas. For this, Cinevideo used two cameras, a Polecam that took pictures in a special studio used pre- and post-game, and a second dedicated to interviews and moments of colour.

Finally, Hawkeye Innovations offers a valuable service to the International Rugby Federation called Head Injury Assessment – HIA – software. It was created for the protection of the players and in the event of a serious clash between the athletes, it enables a doctor to precisely understand the severity of the impact and whether this can affect the player’s health or if they can continue the game.

Following the style of VAR in Serie A, recordings from this service are used to assess the actual state of health live and in real time.