From radio to television to virtual reality, ‘The Olympic Games: Behind the Screen’ exhibition provides a living history of how modern media conveys the Olympic values around the world.

This exhibition was inaugurated at a special event last week at its new, permanent home at the headquarters of Olympic Broadcasting Services (OBS) and the Olympic Channel in Madrid. 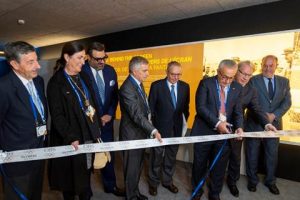 ‘The Olympic Games: Behind the Screen’ is an exploration of the history of broadcasting the Games and the evolution of broadcasting technologies on radio and television, as well as looking at how they will be experienced in the future. Using innovative interactive devices, the exhibition provides an unrivalled adventure at the point where human and technical performance meet.

Through the exhibition, visitors will experience how the sounds and images generated by the Olympic Games help shape and deepen the collective memory of the Olympic Movement, therefore constituting an important archive, which belongs to every individual who has been moved by an athlete, a story or a moment of the Games.

Starting in 2019, the exhibition will be open to local schools, community groups and sports organisations as well as international visitors on an appointment basis in efforts to inform, educate and promote the Olympic Values all year round.

“With OBS and the Olympic Channel both located in Madrid, Spain is the epicentre of Olympic broadcasting,” said Alejandro Blanco. “With this commitment, it is very fitting for ‘The Olympic Games: Behind the Screen’ to have a permanent presence here allowing for those in Spain, as well as around the world, to learn about the Olympic Movement through this exhibition.”

Following its original run as a temporary exhibit at The Olympic Museum in Lausanne, Switzerland, OBS and the Olympic Channel felt that such a notable collection of equipment, images and information deserved a permanent home.

BBC Sport unveils innovative new VR studio for Beijing Winter OlympicsDiscovery lines-up improved expert analysis and an updated Cube for Beijing Winter Olympics coverageSky Sports and DP World Tour extend broadcast partnership in the UK and Irelandarkona renews Gold SVG Europe sponsorship in ‘pivotal year’UHD and beyond: Tedial on maximising the content opportunity in 2022Video assistant referee basics: Slomo.tv on why choosing the right codec for VAR systems requires special attentionEmerging technology: Cobalt Digital extols the virtues of affordable HDR conversion with SL-HDR1 metadataBlackbird swoops on SVG Europe Gold sponsorshipGoal Probability graphic to be added to replays in LaLiga coverageSeismic shift: MRMC on the potential of robotic camera systems to next generation remote productionBuild it and they will come: Cerberus pinpoints the challenges and opportunities of sports broadcasting fragmentationCapturing the cloud: Singular.live on why change is now constant in sports broadcasting
Read more