Personal Best: How Broadcast RF helped the BBC to cover the London Marathon 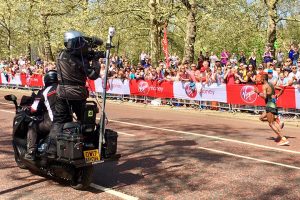 It was hot, the Queen started it and Sir Mo Farah came third. But the 2018 London Marathon was as notable for its TV coverage as it was for any weather, royal appearances or sporting achievements.

The famous 26.2-mile race was started by the Queen, pressing a button from the grounds of Windsor Castle, and saw Olympic champion Eliud Kipchoge finish first in the men’s elite race, with Farah finishing third. Vivian Cheruiyot of Kenya won in the women’s event.

In order to capture the action for TV viewers, the BBC’s live coverage made use of six OBs and benefitted from a 14 km-wide RF receive system that allowed the runners to be tracked using motorbikes and helicopters.

Euro Media Group-owned Broadcast RF was responsible for implementing and managing that network of RF cameras. 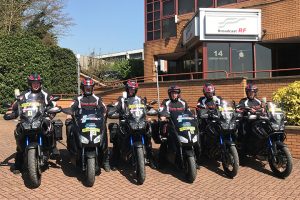 The bike camera team prepares to leave for the Marathon

The primary coverage for the three simultaneous races that take place as part of the London Marathon came from camera operators sitting on the back of motorbikes, all using Broadcast RF kit.

Two bikes followed the women’s elite race, with one bike at the lead and one following. A further two bikes tracked the men’s elite race, again with one focused on the leaders and another on the chasing pack. One further bike covered the elite Para Athletes. And a sixth solely followed Mo Farah.

“If you use a fixed-wing aircraft, as soon as you go under any large bridge, you lose signal”

The main OB facility for the race production was housed at Canada Gate, on the Mall, near the finish line. There were also OBs at the start line in Greenwich as well as next to the Cutty Sark and at Canary Wharf, Tower Bridge and Blackfriars, each with varying amounts of cameras. CTV was the main OB supplier.

The OB in Blackheath was responsible for the beginning of the race, covering the first few hundred metres using fixed line cameras. Once the runners got going, however, it was down to the bikes and the helicopters to follow the action.

“From that point, the director was entirely reliant on those RF sources,” says Broadcast RF managing director Mark Houghton. “Once they reached the intermediate OBs that produce the ‘London landmark’ elements they did switch. But then it was back to the bikes very quickly.” 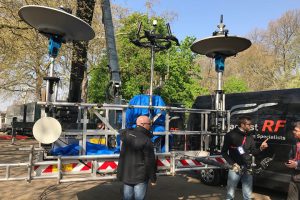 The primary source used to ‘recover’ the pictures from the bikes and helicopters was a fixed-wing aircraft that flew in its own layer of altitude at about 28,000 ft above the ground.

“It was a bespoke aircraft fitted with multiple tracking antennas that picked up and tracked the bikes,” explains Houghton, detailing how it all tied together.

“All the bikes and the two helicopters had GPS transponders on them. All the sources were recovered in the aircraft and then a mux was sent back down from the aircraft to the Canada Gate RF position using two very large high bandwidth transmission paths.”

On the ground were two tracking antennas that sat on top of a 60-metre high hoist. GPS technology was again used to track the aircraft.

“From that point, the director was entirely reliant on those RF sources.”

Although the fixed-wing aircraft was the primary way of recovering the signals and making them available to the director and vision mixer at Canada Gate, the RF network did not end there. One of the challenges that the London Marathon poses is that the course takes in a lot of bridges and tunnels.

“During the last five or six km, having come around the Tower of London, the runners drop down into Lower Thames Street and go towards the Embankment and through the Blackfriars underpass,” details Houghton. “On that route is Cannon Bridge House and a load of bridges. Then it’s literally bridge after bridge, underpass after underpass. If you use a fixed-wing aircraft, as soon as you go under any large bridge, you lose signal momentarily.”

The solution to this problem was to cover that entire section of the race using a bespoke ground-based RF set-up and switch to that when needed.

“This meant that the aircraft was not required again until we reached Big Ben,” he says. 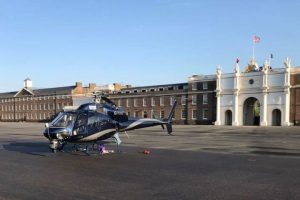 Sorting the helicopter frequencies was a challenge, says Houghton

Taking a year to plan, the London Marathon is one of Broadcast RF’s biggest and most demanding projects.

Houghton highlights the role played by technical project manager Nick Fuller in making it possible. “The extensive planning Nick puts in and experience he brings to the event is essential to our successful contribution,” he says.

Chief among the complexities is the thorny issue of frequencies.

“This year, the helicopter frequencies we were given were in a band [between 2.35 GHz to 2.39 GHz] that is being used for testing 5G mobile,” says Houghton.

“This meant that we had to find frequencies outside of it. With a fixed wing plane, you have to have clear frequency control. Because it is at 28,000 ft with directional antennas, it will pick up any signal in the middle of London. So, you can’t re-use frequencies. The upshot is that the frequencies at all these venues and the ones used with the plane have to be carefully coordinated.”

To get clear signals, the RF team used part of the 3.3 GHz band which is not part of the usual programme-making band but was specially assigned for the Marathon.

This trial was undertaken in conjunction with EuroLinX and Videohouse and saw one of the motorbikes fitted with both a standard transmitter and a Mobile Viewpoint 4G device.

The signal from the 4G transmitter did not go to air but including it during the production proved to be a useful test, says Houghton.

“They have potential for this kind of coverage. We were evaluating where it could be used in the future.”

Coverage of the 2018 London Marathon was broadcast live on BBC1 on Sunday 22 April.