Pétanque in AR: bringing the latest technology to the most “quintessentially French” of sports 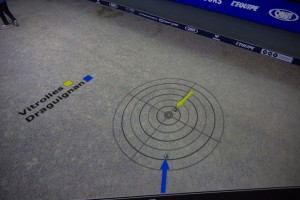 AR has brought a new dynamic to coverage of pétanque

Last month l’Equipe broadcast the Pétanque French Cup championship of the game of pétanque, a form of boules and a sport that is quintessentially French. Producers of this year’s event were eager to use an enhanced graphics solution that would improve coverage of the sport.

In France pétanque is a very popular sport that is widely played, both professionally and at an amateur level. More than 20 programmes are broadcast in France each year (most of them pre-recorded). Since the demise of Sport+ (a Canal+ channel) almost two years ago and a brief presence on BeIN Sports, the television channel L’Equipe now handles the majority of the programming for DTTV broadcasting.

The French Cup Club championship took place in Tours on 17 and 18 March. AMP Visual TV, which was in charge of the video production on behalf of the organiser, used its massive Millenium Signature 12 OB truck for the occasion.

“In terms of production it was a relatively small set-up with five Sony cameras. Two cameras were placed on each side of the playing ground, as players alternate play on one side then on the other. A studio camera was used to film the game whereas a Sony 4300 camera focused on the movements of the boule players. A beauty camera mounted on a crane covered the whole ground and took shots of the public,” explained Pascal Lagoutte, who was in charge of field production.

An additional camera was used for the commentators’ position, whilst an LSM server was deployed for the replays.

The distinguishing feature of this production has been the use of augmented reality graphics. Jean Marc Stabler, the producer, and his team wanted the viewer to clearly see which boules belonged to which player and also immediately identify the distances between the boules and the cochonnet (jack).

“We partnered with DLP and used the Live Track solution by Vizrt. Two small cameras were placed either side of a box next to the camera on the crane. They analysed the action in real-time and recreated the playing surface in 3D in order to track the reference points. This made it possible to place the graphics at a specific point and determine the positions and distances that were then laid over the image,” added Nordine Sekouri, who is in charge of graphics at AMP Visual TV.

The 3D display remains interactive and reacts to the movement of the cameras. The Live Track solution provides image-based real-time tracking that needs no sensors.

The benefits of augmented reality are obviously very important for television viewers. More and more sports with less extensive media coverage like pétanque are using augmented reality in their video productions. Apparently it is even preferred to 4K and immersive sound, as an introduction to the sport, and as a means to build audience loyalty for non-specialist viewers both on television and on the web.