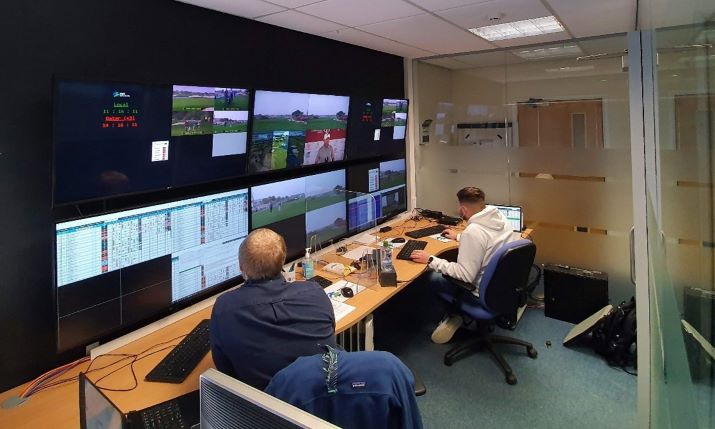 MST Systems has developed a solution to provide remote live graphics production for the European Tour with low latency over the public internet. Pictured here are pod people at MST Systems’ base in the UK

The tailored solution, developed by MST Systems, is set to be the new face of graphics for the European Tour going forwards as it moves towards a more sustainable future of production.

In what is the biggest change in 20 years to how graphics are delivered to the European Tour, MST’s remote graphics system launched at the Qatar Masters Golf tournament which took place from 11 to 14 March 2021.

“Being asked to do remote production graphics for these golf tournaments was all well and good, but [our problem was] how are we going to do it with limited connectivity?”

With golf being one of the more challenging sports to cover remotely due to the general lack of connectivity on-site and only limited wide area network coverage, MST had to create a robust solution that would work over congested public networks.

Jeff Clark, development director at MST Systems, says that creating a remote graphics solution with the limited connectivity available was a huge challenge. He explains: “We’ve been doing broadcast graphics for over 20 years for the European Tour, but doing it remotely now is the biggest change to that.

“We’re very jealous of stadium sports; you think of rugby and football and they’ve got amazing connectivity in stadiums and arenas that the production can use, whereas on a golf course we’re lucky if we go there once a year. So the investment for that infrastructure for dedicated fibre circuits for full remote production where you bring all the cameras back is just not feasible, not at the moment at least; us being asked to do remote production graphics for these golf tournaments was all well and good, but [our problem was] how are we going to do it with limited connectivity?”

As part of the solution, MST increased its golf remote operation from one person operating remotely, to four, with one operator and one engineer on site in Doha. The solution has three graphics operators operating from dedicated facilities off-site using MST’s fully integrated scoring and golf graphics system, plus one engineer.

The solution synchronises the golf statistics and scoring data to provide a fully native experience when working remotely. Operators access the same dataset for the entire golf field (140-plus golfers) as they would have access to if on-site, without any lag or delay. MST is also delivering a remote Toptracer graphics system and remote support. 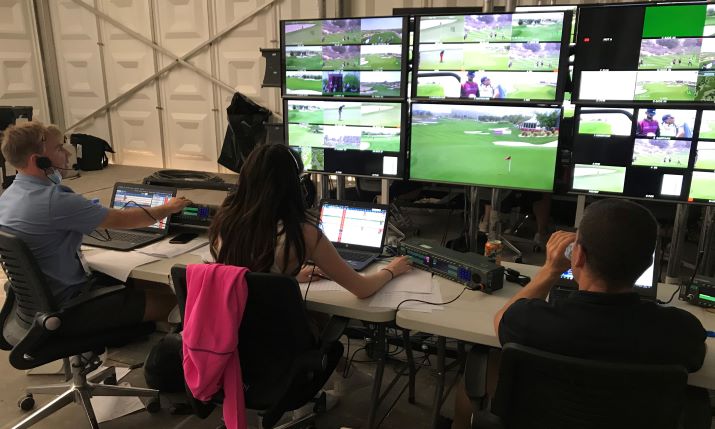 Pod production staff have access to all facilities on-site, including monitoring, talkback, information and graphics systems. MST’s remote monitor walls are fully configurable and do not have to mirror what on-site users have, due to MST’s efficient and low latency video monitoring solution which allows the company to bring numerous separate feeds of video back. For the Qatar Masters, 16 independent feeds where sent back.

Clark says: “We wanted to offer a ‘business as usual’ service, where remote graphics doesn’t come with a long list of stipulations on what can or can’t be done.

“Our way of synchronising data between sites means our graphic operators and commentary users have exactly the same user experience as if they were on-site, with minimal latency for their contribution to the production.

“Knowing our solution had to work over congested networks led us to create a number of interesting systems, from low latency remote video monitoring and graphics control systems to cloud synchronised scoring and statistics data. Our secure remote graphics control platform allows operators to control any graphics engine placed at the OB, from anywhere, and works with as little as 0.5Mbps connectivity,” Clark notes. 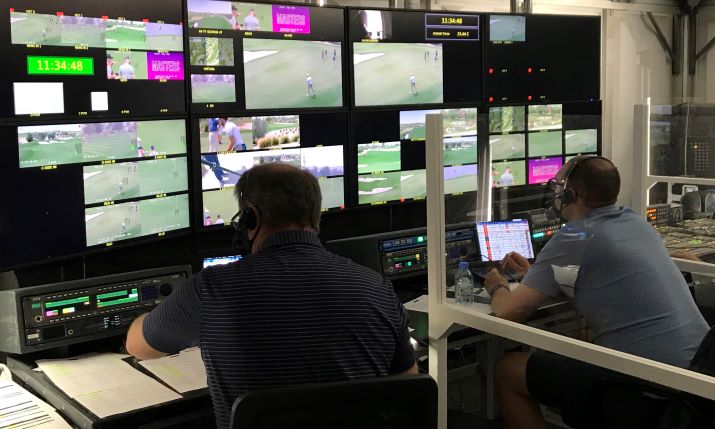 MST Systems has pivoted its workflows providing graphics operation for the European Tour from its base in Malvern, UK for events as far away as Qatar

There is a cloud-synchronised graphics control system that ensures ultra-low latency delivery of graphics operator commands to multiple graphics engines on-site, which, combined with the low latency video preview system, means remote operators were able to see their outputs in under 180 milliseconds from the Golf event in Qatar (the measured roundtrip time for data alone is 140ms).

MST also created a standalone remote desktop software for TopTracer that adds only a fraction of system load when compared to typical off-the-shelf remote desktop solutions for this kind of demanding real time graphics application.

The final piece of the puzzle is for those users who cannot be based out of MST’s remote pod facilities, such as commentary teams. Using tried and tested methods taken from the company’s synchronised venue data systems deployed on Euroleague Basketball since 2016, MST was able to easily offer remote commentary information systems to commentary teams and any at-home users.

Looking ahead, MST hopes to innovate further by tackling remote contribution of graphics in addition to the remote operation. Says Clark: “It presents an even bigger challenge whilst we still have to contend with congested on-site networks, but we’re exploring solutions through bespoke hardware and software development.”

Clark adds: “This is the direction we’re going in now for the future; European Tour is really pushing for as many people to come off site as possible. The reality is this is how we’re going to deliver our service for the future.” However, he goes on: “If we can’t get the connectivity – you know, if we can only get 10Mbps – then sending the volume of remote monitoring feeds back won’t be possible. Same as you can’t defy the laws of physics around latency; data still has to travel down the wire, but wherever possible we will deliver it this way.”

David Mould, director of television at European Tour, comments: “The European Tour made its return to action in August 2020 due to the incredible efforts of players, staff, partners and stakeholders. A key element of our continuing operations has been the adoption of innovative and flexible remote technology. MST Systems have pivoted their workflows providing graphics operation from their base in Malvern, UK for events as far away as Qatar.”

Sally Wood, head of production, European Tour Productions, says: “MST Systems have provided a bespoke solution in what continues to be a very challenging broadcast environment. With a focus on reducing on site headcount their solution is to provide a service which is effectively ‘business as usual’. No one would know that the majority of their operation is 4,700 miles away from the OB compound.”