The PGA TOUR and THE PLAYERS Championship are combining forces to produce and deliver the iconic 17th hole’s island green at TPC Sawgrass in live 360 video and virtual reality (VR) during all four days of THE PLAYERS Championship this weekend. The live VR experience, which will utilise Intel True VR technology and feature three camera positions at No. 17 at THE PLAYERS Stadium Course, can be viewed globally on Samsung Gear VR headsets through the PGA TOUR VR Live app available on the Oculus store. In addition, a 360-video stream will be available exclusively on Twitter and Periscope during all four days of the event.

Using any smartphone, fans will be able to watch live, 360 video from the 17th hole. Fans can find the coverage starting on May 11 at twitter.com/PGATOUR or by following @PGATOUR on Twitter and Periscope.

The live VR experience is being produced in collaboration with Intel and will be produced with Intel True VR technology with three concurrent VR camera positions during competition. One camera will be placed on the 17th tee, one camera on the walkway from tee box to the green, and one camera mounted in the water next to the island green.

“We tested Intel’s True VR technology on a live basis at the Genesis Open in February, and were very pleased with the quality. We decided that executing a live VR experience on one of the most dramatic holes in golf was something that our fans would love, and the fact that we are partnering with Twitter to deliver 360 video will offer tremendous scale.”

“The Intel True VR platform will provide golf fans with a new, immersive experience using our end-to-end solution. From our stereoscopic cameras at the iconic 17th hole to creating a PGA TOUR VR application for THE PLAYERS Championship, we work with our partners to create the best fan experience,” said David Aufhauser, managing director, Intel Sports Group. “Working with the PGA TOUR, as well as global distribution via Twitter and Periscope, gives us the ability to expand the Intel True VR experience to more fans.”

“The PGA TOUR continues to innovate for their highly-engaged fan base on both Twitter and Periscope,” says Laura Froelich, Twitter’s global head of sports partnerships. “Thanks to this collaboration, golf fans around the world will have exclusive and unique live access to the renowned 17th hole at TPC Sawgrass.” 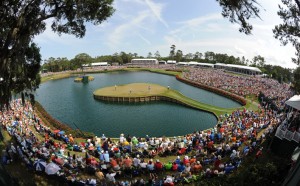 THE PLAYERS Championship marks the first time Twitter has distributed live 360 video during a major sports event. The announcement of this collaboration between the PGA TOUR and Twitter follows the live streaming relationship announced earlier this year. Twitter’s early round distribution of PGA TOUR LIVE coverage, viewable weekly at pgatourlive.twitter.com, has averaged almost half a million unique viewers each day, more than 70% of which are under 35 years old.