The Premier League will kick off on a Friday night for the first time ever when Arsenal host Leicester City on August 11. Friday night matches were introduced last season but this will be the first campaign-opener not to be played on a Saturday afternoon. Sky Sports will broadcast the action at the Emirates, which kicks off at 7.45pm. 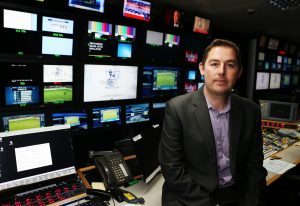 Nick Moody: “This is a massive operation covered by an ethos which is to deliver content with technical efficiency, exemplary service and innovative programming”

Long gone are the days when the live football offering on television in the UK was limited to the FA Cup final and international matches. Even the highlights programmes broadcast on a Saturday night or Sunday afternoon were restricted to just a few games. Today, of course, broadcasting football matches is a big – make that, huge – business. And not just in the UK, but throughout the world.

England’s Premier League is probably the best known of the football attractions on a global scale. Last year, the Premier League signed a new agreement with global sports and media leaders, IMG, that involves the two organisations working together to operate Premier League Productions (PLP) for the next three seasons.

“This is a massive operation covered by an ethos which is to deliver content with technical efficiency, exemplary service and innovative programming,” states Nick Moody, Head of PLP. “Our job is to provide all of the overseas broadcasters who are licensees – of which there are over 80 – with coverage of all of the Premier League’s 380 matches. We take the content provided by the Host Broadcasters – Sky Sports, BT Sport and the BBC – into the IMG facility at Stockley Park in west London, add in our own content and create the World Feed. In addition, we produce a daily magazine programme and distribute other relevant content around the globe.”

The Premier League is shown in 189 countries – that’s the whole world except for Moldova, Cuba, St Kitts & Nevis and, perhaps unsurprisingly, North Korea. Servicing those overseas broadcasters is a huge undertaking. “We want to take responsibility away from the UK Host Broadcasters to allow them to provide the very best service for their domestic viewers. That said, we have a great deal of interaction with the Host Broadcasters to ensure we all provide the best quality service.”

Although the World Feed (WF) takes the match coverage provided by the Host Broadcaster (HB), PLP supplements its offering with a variety of other facilities. “We will provide a pre-match look at the upcoming game, offer content for half time and then do a post-match wrap of around five minutes. In addition, every game will have its own World Feed commentator. And if an overseas broadcaster wants facilities at any game, it is our responsibility to provide whatever is needed.”

Moody goes on to report that PLP also provides additional technical facilities on-site, including a tactical camera plus a wide angle of the stadium to allow its clients to overlay their own graphics and to offer a link into and out of the WF coverage.

“We will continue this season to have a presence on site at approximately 200 games, through our OB provider, Telegenic. We will have the ability to supplement the world feed with multiple cameras. Some broadcasters may request that we cover a specific player – and we can offer that facility through an ISO camera from that vehicle.”

Moody says that other cameras can provide unilateral coverage for broadcasters who wish to be pitchside with their own presentation team. “The beauty of the Telegenic van is that it is flexible. We can increase the number of cameras to eight if the need arises.”

Output from the van is fed back to Stockley Park where a director can remotely cut the game. “Remote production is the current ‘buzz’,” says Moody. “But we are using the technology to direct around 200 games a season from the IMG Studios.”

That facility in west London also accommodates 10 production galleries where the output from Premier League games is handled. Each gallery has a producer/director, graphics operator, sound engineer and EVS operator.

“Our fibre connectivity means there are 24 lines out from each Premier League stadium. That enables us to bring back all those different cameras and feeds which we require. Our plans call for further expansion through our connectivity supplier, BT, during this coming season. This will mean we will have up to 100 lines coming into PLP on busy match days.”

Moody continues: “We need to get all of our content back to the studios as quickly as possible. That is paramount, and IP connectivity gives us flexibility and scope for growth. We can do more today because of the way technology has progressed.”

And speed of delivery is certainly achieved when it comes to PLP’s Clips Channel. “Take, for example, the Saturday games that kicks off at 3pm. We have access to the Hawkeye truck for goal line technology. We have an operator at Stockley Park who has access to all the angles when it comes to major incidents in the games. He or she can immediately clip that content and make it available to all overseas broadcasters. It means, for instance, that the BeIN studio in Doha can, within seconds, have 10 different angles of a goal.”

Innovation on the cards

“Our feedback is that we are doing a great job,” says Moody. “But that doesn’t mean we are complacent. We are continuing to innovate.”

Those innovations for the 2017-18 season include green screen shoots of dynamic line ups, special messages from players for broadcasters around the world, player pronunciations and new Matchday Live titles with artistic stills shot specially by Noah Productions and their elite photographer Theo Cohen.

Moody reports that other innovations include an expansion of the training ground connectivity with more concurrent feeds available through Zixi from five to eight lines.

“We are also in co-production with Buzz16 to create a six-part series entitled ‘Gary Neville’s Soccerbox’. We will provide programming around PL Live Bangalore on 14 and 15 October. And Steve Bower is joining Manish Bhasin and Andy Townsend as our Sunday presenter of Matchday Live.”

PLP is a massive undertaking – but then the global audience is around one billion viewers. So, Moody and his team must be doing something right. In fact, other footballing bodies such as the Bundesliga and La Liga are often encouraged to look at the PLP operation and emulate it.

“That is, of course, flattering – but we do realise that other leagues are closing the gap between what we produce and what they offer to their viewers. But we will continue to innovate and provide the huge Premier League audience around the world with the very best coverage of their favourite sport.”