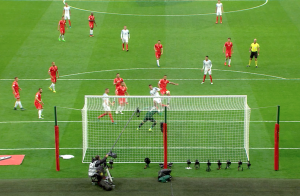 Steffan Hewitt with the Polecam and PICO minicam. The camera has a live output and an ultra slo mo output both feeding to the OB set up

Polecam designer Steffan Hewitt started out in sports as an extreme sports cameraman, even skiing backwards downhill to cover skiing, and surviving. He designed the first Polecam for his own use, and kept refining it until others noticed it and wanted one, and so it evolved to become a commercial product.

Hewitt has always been hands-on with Polecam, and has never stopped updating and enhancing. Some years back he added an underwater head and camera housing and that’s been in use for years now at many of the world’s top swimming and diving events introducing new shots and angles that enhance the viewing experience. He added an Antelope PICO high speed minicam to Polecam and that Polecam + PICO rig was used for underwater swimming and diving events and coaching, for F1 pit stop analysis and high in the mountains for World Cup skiing.

Now he has again fitted an Antelope PICO high speed minicam to a Polecam and designed a low profile rig that allows placement right behind the goal for soccer television coverage. It’s already been used successfully in recent Premier League matches, Champions League Semi Finals and Finals, as well as World Cup Qualifier games, bringing new live and ultra slo mo action to the viewer, seen as though you were standing right inside the goal. The PICO and its high resolution lens are small enough to discretely peer through the goal net with the result that the viewer seems to be standing right inside the goal.

Hewitt operated the set up at the recent England v Malta World Cup qualifier at Wembley Stadium. “I have to say, it’s quite a privilege to be in perhaps the best seat in the house surrounded by 82,000 people. You have to pinch yourself now and again to realise how lucky you are – I really do love my job!!”

He continues: “We are very excited here at Polecam about this new view for football coverage. It is genuinely a new angle that gives the viewer and commentator an uninterrupted and clean view of the goalmouth action.

“The advantage of the camera in the middle of the goal means we can follow the action with the Polecam head as opposed to being in the corner which is too wide and shows a lot of netting. Much better for goal mouth action for set-up for corners, goal kicks and penalties.”

“A huge advantage of having a manned system behind the goal is that it allows the Polecam to be used for other things in other positions. Don’t forget that Polecam is designed to be easily moved around and relocated; players in and out of the tunnel, presentations during the production, crowd shots and even pitch side pieces to camera.” 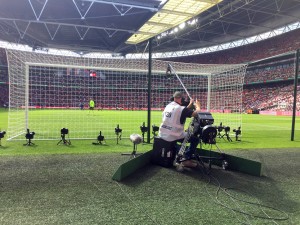 spectators in the stands behind. The PICO high speed minicam has two outputs, one live, so it can be cut to in the OB truck as a normal camera, but with the advantage of seeing that clear view of the goal mouth and beyond. In addition, it has a second output that provides the ultra motion feed that can be slowed right down to analyse every movement of the ball and players.