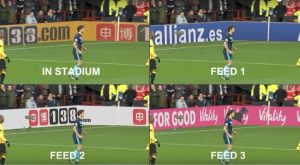 A number of Premier League and English Football League (EFL) clubs have invested in new perimeter technology this season, which give them the ability to integrate Supponor and ADI’s virtual replacement technology.

Virtual replacement technology makes it possible to deliver traditional LED perimeter advertising to fans within the stadium, whilst virtually overlaying the content seen by viewers watching in different countries. The new platform adds value to the media space by creating a highly targeted platform for brands to localise their message for audiences around the world.

Ahead of the 2017/18 season ADI installed new S-Line digiBOARD perimeter systems at a number of football clubs. The S-Line model delivers traditional ‘visible’ LED functionality but is upgradable to become a Virtual Hybrid system, which offers the virtual replacement solution. S-Line systems have already been installed at Everton, Derby County and Crystal Palace, with another installed at Brentford Football Club in October. New systems will also be installed at three more Premier League and Championship clubs during the current season with further details to be announced in the near future.

A number of the new digiBOARD installations have been installed for Lagardère Sports, the UK’s largest pitchside media rights owner, for whom ADI have supplied perimeter LED displays for the past five seasons.

The first Virtual Hybrid digiBOARD system, combining LED with Supponor’s broadcast quality virtual replacement technology, was installed in 2016 at Premier League side, Watford FC. Following the successful installation, ADI and Supponor have developed a commercially deployable broadcast quality virtual LED solution, which can be implemented at club level, or scaled across entire leagues and competitions.

ADI’s CEO, Geraint Williams, commented: “It’s an incredibly exciting time for the commercial potential of perimeter media value. Virtual Hybrid technology makes it possible for media rights owners to commercialise the same in-game inventory in multiple markets, on many different platforms, and offer a highly targeted solution for partners. Whilst our Virtual Hybrid technology is already well proven in a live stadium environment and on commercial broadcast feeds, the next step now comes in bringing more clubs, leagues, federations and broadcasters together to define the commercial model to make virtual overlay a reality.”

Charlie Marshall, COO at Supponor, added: “There is a clearly a demand from clubs and brands across the world for a solution that integrates virtual overlay technology with LED. Our technology has been deployed on non-LED signage throughout La Liga, NHL, and Serie A over several seasons and will now accelerate the roll out on LED.”

Marshall continued: “To deliver a top broadcast quality virtual replacement solution which is accepted by the world’s leading broadcasters requires a combination of software and hardware technologies. However, as the hardware becomes more widely installed, barriers to adoption are rapidly reduced. The so-called ‘intrusiveness’ of our solution, which requires investment in new hardware is, in reality, the basis of its robustness and the reason we are able to deliver the quality output required by the broadcast industry.”

Virtual Hybrid digiBOARD was awarded Gold at the Sports Business Awards in 2017 and is a finalist at this year’s Football Business Awards, taking place in London. ADI and Supponor have, this month, been showcasing the technology, live, for visitors to the Soccerex Global Convention in Manchester, which brings together the biggest influencers in the world of football business.