Britain’s Premier League is the most-watched football league in the world, with games shown in 900 million homes across 200 territories. Broadcasters have been asking for greater capacity to supply more feeds, particularly overseas channels wanting their own interviews, graphics and commentary. 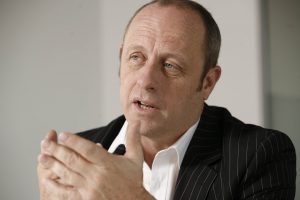 Mark Wilson-Dunn: “Our next-generation network is perfectly able to support both main approaches to remote production”

To cope with this, Premier League Productions (PLP), a partnership between the Premier League and IMG, put out a competitive tender for a fibre-based terrestrial contribution service from all twenty Premier League football grounds to IMG’s operational facility in Stockley Park. The tender was won by BT Media & Broadcast, which has developed new fibre cabinets for the project. It has also added the national stadiums in England and Wales, and hopes to extend the network where there is consistent customer demand.

“Our agreement is to provide PLP with up to 20 linear, uncompressed [1.5Gbps] HD visions, with an additional four visions delivered as either MPEG-4 or J2K [150Mbps],” said Mark Wilson-Dunn, Vice President of Media & Broadcast, BT. “Initially PLP anticipated utilising 10-12 visions per match, but by the second week of the season this had doubled to 24.” The network overall often handles 20+ visions during major matches and has delivered up to 34 signals into and from a single stadium. “We believe this volume of simultaneous visions is unrivalled anywhere else in the UK, and possibly in Europe,” he said.

“Our TVOB network offers flexibility that hasn’t been seen before in the industry, capturing more match-day camera angles and high-quality footage for production houses than ever before,” added Jonathan Wing, Global Sales Director, BT Media & Broadcast.

Initially, the network was for 40Gbps of capacity at each venue – configured as 20+20Gbps giving total diversity between routes to BT’s TVOB Switching Hubs (BT Tower and Colombo House). In the last month or so it has upgraded to 80Gbps configured as 40+40Gbps, to cope with multiple match camera angles, interview circuits and international broadcaster unilateral material. The extra capacity will also further support remote production.

Built around an IP core

“The great advantage of running an uncompressed HD network is that the volume of equipment is significantly reduced. To support the 20 uncompressed HD visions there are no encoders or decoders in the infrastructure, instead we rely upon Nevion IP encapsulation equipment, ADVA optical networking and termination kit, and Cisco switches. There is also other equipment that supports the environmental monitoring of the cabinet and network control,” explained Wilson-Dunn.

The air-conditioned cabinets are powered by mains power, but there is an option to use a generator (the preferred method during a live event). There is also a UPS battery backup that automatically activates during a power failure and will power the cabinets for several hours.

Two video monitors display the feed the customer is sending, and BT monitors the cabinets from BT Tower, from where it can also remotely open them for customers.

It generally provides a mix of services, including HD, UHD, data and internet. “Some broadcasters use the remotely managed service, where they operate on a self-provide basis. In this situation, although BT does not have anyone on site, our MCR is able to assist with automated tools and diagnostics that help in problem solving. Other broadcasters require BT to have an engineer and truck on site to give a greater level of confidence, and provide additional monitoring at source.”

For big events, such as the IAAF World Championships held at the London Stadium in August, with 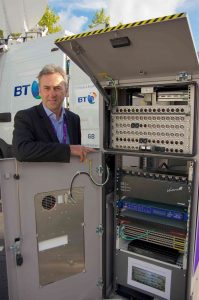 Moving to TICO for UHD

“We’re also currently in the process of testing TICO compression for UHD. This enables us to reduce the 12Gbps video to 3Gbps, with the advantage of lower latency and higher quality than the traditional quad H.264 and HEVC compression technologies. We already have a contract for one customer to receive TICO UHD services from us later this year, and are in discussions with a number of others who are interested. This again, demonstrates the substitution of expensive compression technology for higher transport bandwidths and a further justification for the rollout of our next-generation network,” said Wilson-Dunn.

The uncompressed system allows them to replace broadcast equipment (primarily encoders and decoders) with increased bandwidth, and as the cost of bandwidth falls this is an increasingly viable option in future. Besides, 20+ visions using compression would have needed a very large cabinet (or multiple cabinets) with increased power consumption, and more hardware requiring maintenance.

“Once the initial optical network is installed, the cost of an extra wavelength is relatively low, making it cost effective to provide additional video and data services at a lower cost. Already one customer has upgraded their capacity requirements twice in the last 12 months,” he said.

The cabinets can support various types of remote production. “There are a number of IP centric approaches which require 1Gbps or greater connectivity. The alternative is to bring back all the camera feeds from a venue to a central location. Our next-generation network is perfectly able to support both these approaches,” he said. “The number of individual camera feeds at a sporting event can vary from six up to 40-50. A typical Premier League match could have 15 – 30, meaning our network can bring back every camera should the broadcaster require this,” said Wilson-Dunn.

It will probably be some years before the industry truly move to full IP, but “from our perspective, we’re future ready, as we already have the capability to support the industry no matter which way they choose to go.”