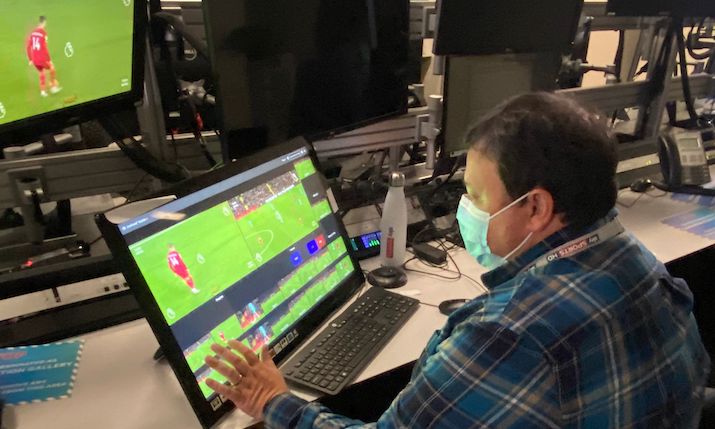 Collaborating as part of IBC’s Accelerator Media Innovation Programme, they have experimented with multi-provider cloud technologies, formats and workflows, sharing camera feeds, audio, graphics and human resources to avoid duplication and reduce travel and other energy requirements in the production chain.

High level findings from the trial include confirmation that cloud production reduces the amount of technical infrastructure required for the gallery production, for some broadcasters by up to 70%. It also demonstrated that cloud production further reduces the requirements for significant onsite technical facilities as it allows signals to be sent quickly and easily to multiple locations.

The project team deployed bespoke workflows and architectures alongside a traditional outside broadcast production to compare and contrast carbon footprints, in a collaborative proof of concept demonstration during the Premier League game that took place on 16 December 2021 between Liverpool and Newcastle United.

“Improving sustainability has become a number one priority for the media and entertainment production sector,” said Andy Beale, project lead and chief engineer at BT Sport. “The future of our planet depends on a collective effort to become carbon net zero. With this IBC Accelerator project, we wanted to tangibly experiment together to understand the alternatives to traditional OB production in live sport, in order to make carbon metrics more readily available so companies can benchmark what they are doing and help motivate them to do more to reduce their own carbon footprints.”

“Reducing the carbon emissions attributed to the production of our sports programming is of great importance – and a major part of Sky’s ambitions to achieve its goal of net zero carbon emissions by 2030,” added Inga Ruehl, executive director, production services & operations at Sky. “The promising results from the trial show that the industry goal of a drastic reduction of emissions through means such as cloud production workflows is very much attainable. If the industry continues to work together towards this goal it can make a huge difference.”

“Innovation and collaboration are fundamental in the global effort to tackle climate change, and this IBC Accelerator embodies these attributes in its quest to help the broadcast industry achieve carbon net-zero live production,” said Mark Smith, leading the Accelerator programme at IBC. “It’s impossible for the media and entertainment industry to become more sustainable without qualitative data. The team behind this unique collaboration helped create all-important metrics by analysing the carbon footprints from high-profile Premier League games, providing actionable data so the entire industry can do its part to help solve the climate crisis.”