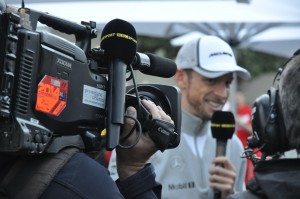 The equipment is packed into three lightweight containers that can be loaded as aeroplane cargo. The pods for the flyaway package, which contain air conditioning and power distribution systems, were built by Quentor Cases to designs from Presteigne Broadcast Hire. It is used to produce the BBC’s unilateral output, combining 15 feeds from the host broadcaster with three wireless cameras on the presenters, including main host Suzi Perry, in the pits and paddock areas.

On the audio side Presteigne is using radio mics and IEM systems supplied by UK specialist Raycom, which distributes the Wisycom brand. Presteigne is the “launch customer” for Wisycom’s purpose-designed RF over fibre system, which is being used for both mics and the presenters’ in-ear monitors. This provides features including remote monitoring, automatic gain control and filter tuning on the diversity antenna inputs for the wireless receiver.

“Our design depended on packing in all the functionality, based on the latest technology for light weight,” comments Alan Bright, director of operations for Presteigne Broadcast Hire. “We used fibre wherever possible and advanced RF equipment to minimise the amount of cabling we need to carry around. The latest wireless links also give us the flexibility we need: we are working in a busy RF environment with many other users of wireless cameras and microphones and we are in a different country with different frequency allocations each race.”

Bright adds that another major demand on the technical equipment is for it to be set up and de-rigged very quickly. “When we have back-to-back races we have to de-rig and load as soon as the race is finished [on the Sunday], then be set up and ready to go on Thursday morning in another country,” he said.