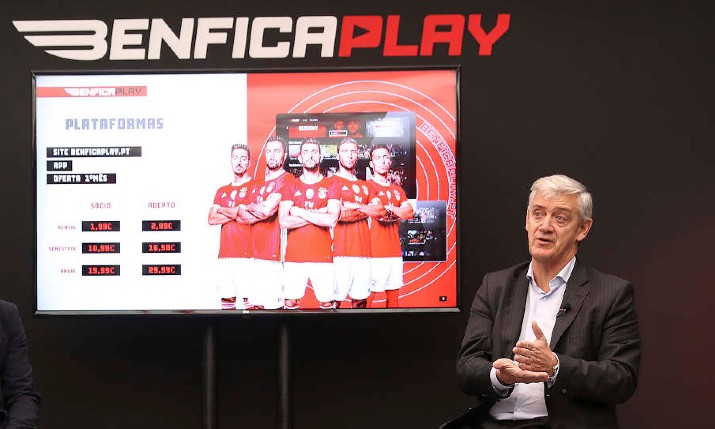 Benfica has become the first football club in Portugal to launch a digital video platform featuring exclusive content produced daily for its supporters.

The over the top (OTT) platform, called Benfica Play, was launched at Estádio da Luz (Stadium of Light) in Lisbon on Thursday 2 January. It will feature content ranging from exclusive one-to-one interviews with former and current stars, footage from the dressing room and behind-the-scenes video from matches and training sessions.

The club has hired a dedicated digital video team that will follow the first team and produce exclusive content 365 days per year.

Benfica chief executive Domingos Soares de Oliveira (pictured above) described Benfica Play as an “innovative project which will bring fans closer to the team than ever before.”

“Benfica Play is a digital platform that will give our fans exclusive access to content they have never seen before. We have hundreds of thousands of fans outside of Portugal and this will be a key platform to engage with them and offer them an opportunity to feel closer to their idols. We have established a business plan for this project, which is an investment done by Benfica on its own, and the target is to reach several hundreds of thousands of subscribers, which is similar to what we have been able to achieve with our TV channel.”

The OTT platform went live with an exclusive interview with Brazilian striker Vinicius, who has scored 15 goals in 21 games this season.

In the coming weeks, more exclusive interviews will be streamed, including one-to-one conversations with former Benfica academy stars João Felix, Bernardo Silva, Gonçalo Guedes and others.

Insys Video Technologies was the technology partner for this project. The Polish company assisted in the construction and implementation of the platform.

Benfica Play is available on the web at www.benficaplay.pt or via an android and iOS app.