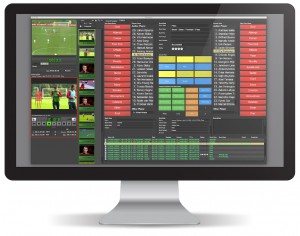 TV3 SPORT in Denmark – a key broadcaster that sits within Viasat and Modern Times Group – is gearing up to implement Primestream’s FORK Logger metadata-tagging module within the FORK Production suite.

The path towards the new implementation – due for completion later this spring – began approximately two years ago when TV3 SPORT began to seriously contemplate the transition to a tapeless HD workflow. “An increasing amount of the feeds we were getting were HD, and our editing platform needed to move forward to keep up with that situation,” recalls Tobias Brown, transmission and master control manager at TV3 SPORT.

An exhaustive search for new tapeless production technology ultimately led Brown and team to adopt the FORK Production Suite from US manufacturer Primestream. “Within this suite, the Content Navigator Media Asset Management tool allows you to see the files within your MAM and do some simple mark, in mark out segmenting. That can be used for all manner of functions, including to send to your edit suite, to playout or to studio control,” says Benjamin Vos, Senior Sales Engineer at Primestream.

Now, in the latest stage of the project, TV3 SPORT is implementing the FORK Logger module – a deployment that is fundamentally interlinked with the broadcaster’s recent reassessment of “whether our sports coverage is providing the elements required by journalists and commentators to help tell the story of the sport in question”.

FORK Logger, notes Vos, “uses much the same functionality as Content Navigator, but is essentially designed to put metadata into the clips you are making. So, for example, TV3 SPORT is interested in having people log a football game as it takes place, with a series of buttons reflecting the primary action within a match. If a goal takes place then you press the button as soon as the goal happens, creating what amounts to a sub-clip of the goal and 90 seconds of subsequent action and reaction. Once the clip has been created you can put in metadata about the clip, including which team scored the goal, which player was involved, and which type of action. The buttons are logically set-up so it brings up all the options related to the goal. It’s very flexible.”

Brown adds, “But what really differentiates this tool from some others is that within the same GUI you can have the live feed and the proxy copy of the feed – meaning that you can work in real-time or delay by 30 seconds or whatever using the proxy.”

The exact nature of the metadata to be inserted into each sport is still being refined, but the underlying principle is unwavering. “We have been very methodical about finding out what commentators and experts find interesting about a game, and what information they want to impart to viewers,” says Brown.

Working in close conjunction with Primestream to fine-tune the feature-set over the course of more than a year, TV3 SPORT ultimately arrived at a logging function that “can really be applied across sports and to other programmers too, such as reality shows. But with sports, in particular, it will enable broadcasters to make much better use of their assets for all kinds of media – broadcast TV, websites, etc – in a highly streamlined way,” says Ben Vos.

The proof, of course, will be in the final implementation, so look out for an update on TV3 SPORT’s FORK deployment later this spring.