Asteroid Day, the official United Nations day of global awareness and education about asteroids, began with two major events in 2015 and has grown to more than 2000 self-organised events worldwide for the week of 25-30 June.

Following the successful coverage of the 2017 Asteroid Day, BCE has once again been selected as the host broadcaster for the 2018 Asteroid Day LIVE from Luxembourg broadcast, which airs from 29 June through 1 July. BCE will ensure an uninterrupted 48-hour global broadcast. 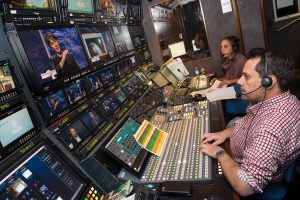 BCE is a major sponsor of Asteroid Day. BCE will provide a fully equipped studio with a dedicated production and organisation team, for the 48 hour broadcast, via its full IP-based broadcast centre to a dedicated satellite (available on local channels subscribing to the SES satellite network) and through a live stream available on the AsteroidDay.org website.

“Our IP-based broadcast centre allows ad-hoc broadcast setup for events or ephemeral channels, such as live sports or special news. Our strong partnership with global satellite operators such as SES or Eutelsat and our state-of-the-art infrastructure and CDN, enable us to offer tailored-made services to our customers,” explains Tun Van Rijswijck, COO at BCE.

The event is hosted by Prof. Brian Cox, British physicist, author and BBC commentator who will welcome astronauts, scientists, physicists, government officials from numerous countries, as well as special guests and asteroid experts. The European Space Agency (ESA) is strongly supporting the event and will team up with the European Southern Observatory (ESO) to produce a live webcast from the new ESO Supernova Planetarium & Visitor Centre (Garching, Germany).

The 2018 edition of the Asteroid Day also welcomes hundreds of pupils from the Grand-Duchy of Luxembourg national schools. The children are preparing numerous activities around the Asteroid Day event and will share their school works during the event.

“We are glad to host this planetary event for the second time. The production and communication teams are working hand in hand with the organiser to ensure the best results both in terms of event and broadcast quality,” comments Xavier Thillen, Head of Production and Digital Media Operations at BCE.