One of the biggest events in the squash world is coming in mid-December. The 2019 World Squash Federation Men’s World Team Squash Championship will take place 15-21 December in Washington, DC, and viewers across the world will be able to stream all the action for free.

Local club Squash on Fire will host, with matches taking place on up to three courts simultaneously. Squash is more often played one-on-one, but, for teamplay, this event is the pinnacle. It takes place every two years, alternating with the women’s championship.

The stream will be pushed to Facebook, and a SquashTV production team will edit the video into match files, available after the event.

The tournament’s streaming production will be handled by SquashTV. The broadcasting arm of the Professional Squash Association (PSA) will, for the first time, partner solely with Facebook for distribution, streaming eight to 10 hours of daily coverage live to viewers around the world.

SquashTV signed on with Facebook in January, with a plan to promote men’s and women’s events around the world through Facebook Watch. Because of rights restrictions in certain territories, previous Facebook streams didn’t go out to all areas — notably Europe. But the PSA will be free to stream the upcoming men’s tournament to all locations.

For PSA COO Lee Beachill, global coverage is only one goal. He’s also focusing on building fan engagement, pulling fans in by providing more coverage of the players.

Viewers will get exclusive interviews; the opportunity to interact with teams, players, and managers; and camera angles that heighten the excitement. The tournament provides a rare opportunity to reach casual participants, so, if Beachill and his team can hook them on the personalities and the action, they might turn into dedicated fans.

“The main thing for us is to try to give a slightly different product to the loyal fan base we’ve got but also to reach the hundreds of thousands of people that play amateur squash and squash on a social scale around the world,” said Beachill. “These fans don’t necessarily follow the pro tour but have a keen interest in seeing how their country goes, and we’ll hopefully be able to engage them in professional squash as well.” 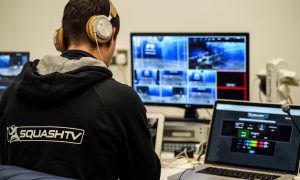 The PSA was an early leader in sports streaming, creating SquashTV 10 years ago. The site offers a subscription service and is the leading destination for squash viewing. It will carry the same live tournament streams in December, though only to subscribers. Anyone else can tune into Facebook Watch for the free option.

During the tournament, Beachill plans to have a team of seven or eight onsite handling the broadcast and social presence. They’ll bring with them Canon cameras, a NewTek 3Play system for instant replays, and a Blackmagic mixer. He’s considering placing six cameras around the main court.

There will be a live audience for all matches but no other broadcasters. Streams will be sent to association headquarters in London, which will push a copy to Facebook. A production team at the London facility will be responsible for editing the video into individual match files, which will be available on-demand after the event.

Total latency on the live stream should be seven or eight seconds. There won’t be any ads on the stream, as there is no monetisation strategy. For the PSA, attracting a wider audience is the main goal. Since this is a championship, there won’t be any online wagering, although there is for lower-tier PSA events.

In several months working with Facebook, Beachill has learned that offering fans access brings huge rewards in engagement. When the cameras allow fans to see into venues they haven’t seen before and meet the pros in new environments, performance is strong. If that’s what fans respond to, that’s what he plans to deliver in December.

“I think the want for fans around the world is to be more engaged and more in touch with the players,” he said. “More in touch with what happens around events. You know, back of house and interviews and how events are put together.

“I think fans expect a little bit more now from sports than just the action, particularly through the internet and through streaming. It gives us the ability to get a little bit more into this environment of a professional sports event.”