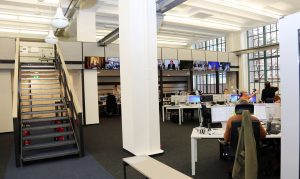 The newsroom at Deutsche Welle

Qvest Media is designing the production workflow based on a scalable and modular cloud-native architecture and infrastructure. The broadcaster’s new technology strategy is using the collaborative use of aggregated and produced content for efficient multi-platform distribution.

‘Online first’ marks a change in strategy at Deutsche Welle and the broadcaster is planning to align its multi-lingual, international portfolio of programmes and news more closely with online and in particular social media channels in future. The project to set up a cross-site production infrastructure is being carried out by the Qvest Media team in close cooperation with the broadcaster’s dedicated project team over the next two years using agile methods.

Following the initial product implementation, the system and the workflows will be expanded via multiple incremental sprints together with the broadcaster’s specialists and editors. The core of the powerful solution comprises of Sony’s Media Backbone Hive production system, the Qvest.Cloud Ultimate multicloud management platform and the workflow orchestrator Mayam Tasks.

“We are already rolling out Media Backbone Hive and Mayam Tasks in an early stage of the project in form of a minimum viable product (MVP) at Deutsche Welle in Bonn and Berlin,” explained Ulrich Voigt, head of design at Qvest Media. “We are using Qvest.Cloud as an execution layer for cloud containers and for system monitoring. Due to the system design and project routine, we are able to achieve maximum flexibility and to create a future-focused workflow configuration based on best-of-breed applications.”

Project lead Fabian Hoffmann at Deutsche Welle, commented: “It is particularly important to us that we are able to produce faster with the new solution and, thanks to the HTML-5-based video editor from Media Backbone Hive, we are also able to work collaboratively irrespective of our location. One tremendous plus point is the agile project approach that will enable us to develop the system continuously in line with changing market demands.”

All of the new components will be implemented as virtualised software architecture on the premises of the Deutsche Welle data centre. In the future, single components can be migrated into a public cloud. This new solution will initially be linked with the existing system landscape, such as products from Adobe and Avid. The broadcaster is planning to add further cloud-based applications to the system.

For the post-project period, Qvest Media and Deutsche Welle have agreed to continuously expand the system with new features and workflows. With over 3,000 employees, Deutsche Welle has a high demand of globally usable cloud functions. Thanks to automated research tools and applications that facilitate collaborative working and global access to the content pool, the project will bring content aggregation, production and reporting closer together.

Each week, content from Deutsche Welle reaches more than 100 million people across all continents.