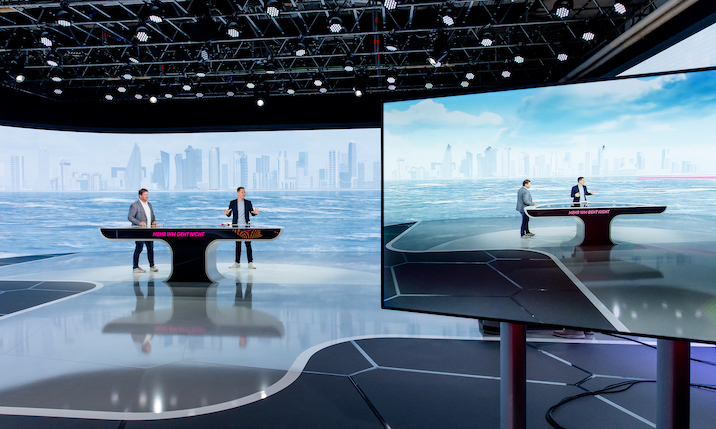 As the exclusive German rightsholder, telecommunications giant Deutsche Telekom will be the first to utilise the Mo-Sys powered studio, from where all 64 World Cup 2022 matches will be broadcast via MagentaTV across 29 production days. After the World Cup, the studio will be reopened as a full virtual production XR LED volume.

PlazaMedia’s director of productions & costumer relations, Hansjorg Baumgartner, explained: “We have worked with Mo-Sys on several VP projects and that experience gave us confidence to entrust their team to deliver this state-of-the-art XR studio. Mo-Sys’ new and innovative camera switching technology for LED VP which maintains render power across multiple cameras without increasing the XR engine count, together with their knowledge, technical support, guidance and ability to bring in key partners has been invaluable to our success here.”

The LED studio uses four cameras, each of which has a Mo-Sys StarTracker to generate the six-axis camera and lens tracking data that drives the perspective view of the virtual set. The tracked cameras work in conjunction with Mo-Sys’ combined LED content server and on-air graphics system bMR (Broadcast Mixed Reality), which delivers the virtual set content from the graphics engine. The bMR system also solves the problem when switching between full resolution tracked cameras shooting a virtual set displayed on an LED wall, where the camera outputs switch faster than the LED wall can update with the correct camera background. Mo-Sys bMR orchestrates the switch to ensure only the correct camera perspective view is visible.

Mo-Sys CEO Michael Geissler added: “The entire team at Mo-Sys is incredibly proud to have played such a significant role in the delivery of this incredible XR studio project. We would like to thank PlazaMedia for their trust in us and we look forward to further strengthening our relationship.”

Mo-Sys worked in collaboration with PlazaMedia’s in-house technical and graphics teams as part of their project management, which ensured the complex studio build was delivered on schedule. Mo-Sys was responsible for all virtual production technologies, which included the 120sqm LED wall from Spanish manufacturer Alfalite. Its Modularpix Pro ORIM 1.9mm pixel pitch panels were specified for the 33mx3.5m U-shaped LED volume, which is driven by a total of 11 render nodes.

PlazaMedia is at the forefront of broadcaster’s adopting LED virtual studios. World Cup fans are set to be truly immersed in the action from Europe’s most advanced XR studio thanks to the company’s commitment to raising production values and improving the viewer experience. Through its use of bleeding-edge Mo-Sys technology, the studio will seamlessly combine the presenters and foreground studio features with augmented reality virtual set extensions and tracked graphics to deliver a unique 360º experience.