Qatar 2022: Rai project manager Daniele Gotti on the broadcaster’s set up in Doha 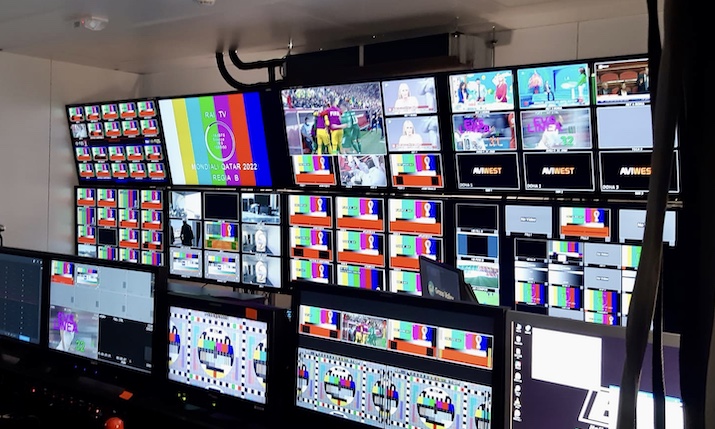 Italy’s Rai is broadcasting the FIFA World Cup live from Doha, from this gallery

For the 2022 FIFA World Cup in Qatar, Italy’s Rai is utilising two control rooms and a studio inside the IBC located in the Qatari capital of Doha, as well as a studio in the Souq about 20 km away. We speak to Rai project manager Daniele Gotti about the thinking behind this set up and the broadcaster’s plans for the tournament.

What kind of commitment has Rai put in place for this World Cup and how are the production spaces organised?

The space of this double control room, built inside the IBC in Doha, is equipped for the reception, sorting and retransmission of all the matches and all the signals arriving from the stadiums, which are a maximum of 70 kilometres away. We also have another studio in the Souq about 20 kilometres away.

In addition, all stadiums have a commentary station maximised in terms of cost and performance.

Given that the Italian team did not qualify for this World Cup, Rai will have a reduced commitment in the stadiums, only a few Aviwest 380 backpacks, and there will not be a real customisation of the feed as happened in the past.

Three ENG crews, made up of an operator with an RF backpack and a journalist for commentary, will be on site. For excellent mobility, Sony lightweight cameras were chosen here which, in addition, record to an SD card.

The two control rooms created here in Doha mirror each other and allow us to follow the simultaneous broadcast, especially during play-offs, on two networks. We also broadcast pre-match, half-time and post-match content, all managed also thanks to the contributions on EVS and the highlights.

Is all the production handled by Rai or by an external service?

All the technical material of the production belongs to Rai; we did not use external services. We transported some of the equipment by ship – what was not needed in other situations – and the more valuable elements were sent by air.

The entire live and replay part is entrusted to EVS, while the entire recording and editing section is managed by equipment covered by a Rai patent.

Over the years, a research team within Rai, led by Piero Rossini, has developed a proprietary system for ingesting, recording and managing clips on NAS, based on QNAP devices. It is a data storage service, which allows users to work on open files involving Grass Valley’s Edius X editing software and Metus MAM software for ingesting, recording, transcoding and streaming.

The system manages 13 simultaneous flows which are delivered to five shared editing stations, which draw what is needed directly from the NAS. This takes place after preliminary indexing and management in the MAM.

It is an interesting choice, given the importance of the event. What other equipment is involved in the various studios and galleries?

The decision not to use more well-known equipment, such as the Avid system that we used at the Olympics, derives from the excellent flexibility and lightness of said proprietary architecture, which has proved to be ideal for events like this, where the flows are not so numerous.

The two control rooms with master control are built on Riedel devices, distributed matrices, which manage all incoming and outgoing signals. The central video mixer is a [Grass Valley] Kahuna. This area is looked after by master control tech coordinators Christian Ferracin and Vincenzo Vitale.

The studio set up at the Souq includes three Grass Valley cameras, two of which are equipped with sensors, to operate with the For-A augmented reality system. Davide Meda is the manager of this area. 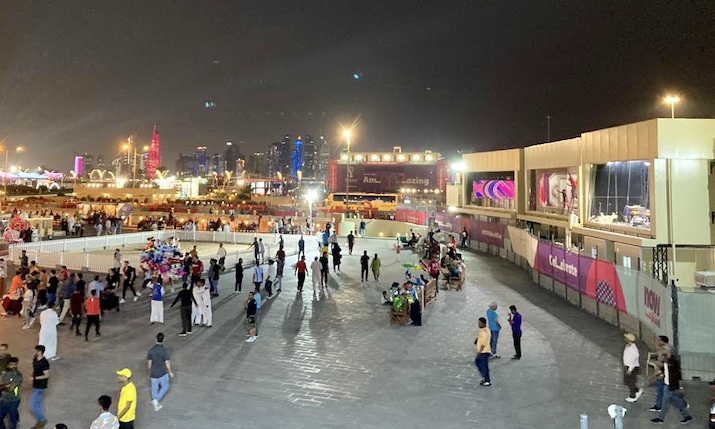 The Souq studio provides an interesting backdrop for viewers

In the Souq, HBS has made some studios available to broadcasters and the entire infrastructure was built from scratch for the occasion, in an elevated position. Below they have placed containers that are partly used as dressing rooms and partly as a technical section.

This is due to the fact that the studio in the Souq is used for presentation of the matches and the post-match shows. It is very picturesque and, thanks to a window facing the outside, always very lively.

In addition, an adjacent 3×3 metre external platform is also used with a single-camera shooting area: a sort of balcony overlooking the Corniche, the promenade where you can enjoy a beautiful view of the modern Doha skyline. This other view of the outside also allows you to frame the sea in the background.

From here all the signals are packaged and travel on a single multicore fibre cable which collects the video, audio and control signals, and sends them back to the container located on the ground floor. From there they are sent to the IBC over a 1GB connection.

Lawo equipment with VSM software manages these transports which deliver the signals to the two galleries in Doha for subsequent sorting, as well as the entire broadcast flow.

The day is very busy and starts with the sports news at 13:00 (11:00 in Italy), with connections made for morning show Rai Unomattina, thanks to the RF backpacks from the stadiums.

At the IBC there is a corner station from which we broadcast the news and which also deals with the presentation of the first game of the day, the one at 13:00.

In the IBC, all the match signals are received in 4K which we then transfer to Rome for broadcasting on four 1GB streams, two for HD signals and two for UHD. All studio work is done in HD and then upscaled to UHD. 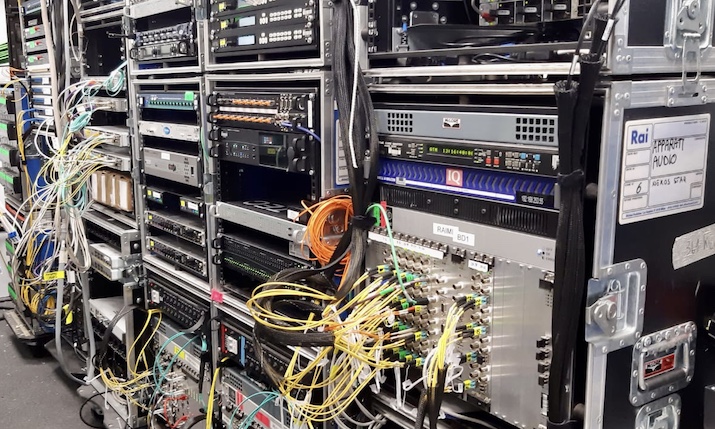 A small dolly arm was set up in the 8×8 metre studio at the IBC for filming. Two Stagetec Aurus control desks are used for the audio.

All in all, it is not a ‘heavy’ system for us as we are not host broadcasters. The only complexity is due to the fact that the two galleries often have to work in parallel because the matches are consecutive: there are many signals for the complete package.

We also joined the HBS FIFA-Max service, a mega server where they upload a lot of material which constitutes an excellent opportunity, even if the time available to use it is not long – and the pre- and post-match sessions are certainly not long, only 20 minutes. We can draw on interviews with teams, fans, rich details, closeups, player info, etc.

From here we do everything Rai Sport needs and we create a daily 30-minute window dedicated to sport with connections for Rai News.

Some broadcasts, such as the demanding connection with Rai News at 12.30 Italian time, collide with a post match broadcast.

At the end of the last game there is a connection with Il Circolo dei mondiali broadcast from Milan.

There are 60 people on site, including two directors, Marco Spoletini and Giampaolo Salomone, assisted by two assistant directors. The technical group includes eight people from RVM Broadcast, two for the EVS XT-Via, and the BLT Teca service for very fast content searches.

The equipment room consists of 14 racks with two rows and we have two 20kW UPS systems to avoid any problems.

There are around 78 broadcasters in the IBC, while the rights have been acquired by a much higher number of networks. The Doha IBC is really huge.