Qatar 2022: Kicking off the audio under pressure at the world’s biggest football competition 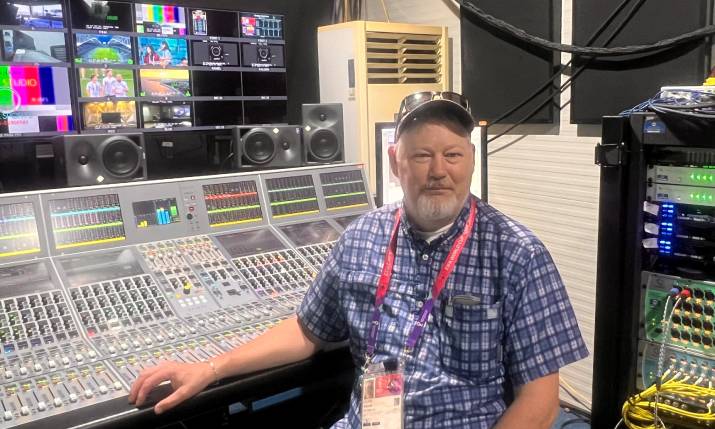 Glenn Stilwell is working in Qatar at the FIFA World Cup 2022 for Fox Sports as an audio engineer in charge, stationed at the broadcaster’s new state-of-the-art set on the Corniche waterfront promenade in Doha

This year’s FIFA World Cup is expected to be the most watched World Cup finals in history, with an anticipated global audience of more than five billion people.

For 2022, broadcasters are going all out to up their game with commentaries, pre-match build up and post-match analysis being created live on the ground in Doha. With 32 international football teams all in the same place, there are a lot of stories to tell and a lot of chatter to cover.

In addition to the challenges of bringing the noise at such a high profile event – only the world’s biggest and most anticipated football tournament since COVID, so no pressure – this year US media rights holder Fox Sports has a fully SMTPE 2110 network. More so than ever, having a robust tech team on site is crucial.

The broadcaster has four audio engineers in charge (EICs) stationed at the IBC and the broadcaster’s new state-of-the-art set on the Corniche waterfront promenade in Doha. They are responsible for the entire on-site audio infrastructure: build, test, management and a real life, on-air insurance policy.

Glenn Stilwell is an audio EIC located at Fox Sport’s waterfront set. Stilwell has been involved in sports audio broadcasting for over 35 years; he was recruited as a post-game radio engineer for the Sacramento Kings of the National Basketball Association in 1985 and by 2004 he was a full time A1 and A2 freelance mixer. He joined Pac-12 Studios in 2012 where he was senior audio engineering and production manager, and in January this year he returned to a freelance and consulting role, also consulting for Dolby Laboratories.

In Qatar both audio networks are connected but operate independently. At the IBC, Fox takes the host feed from host broadcaster HBS, as well as its own match commentary feeds, plus additional stems from individual microphones to customise its output feed.

The Corniche set has its own audio control room (ACR) as an extension of the broadcaster’s World Cup network. The impressive outdoor set, stationed some distance from the IBC, is the location for Fox’s presentation of the entire tournament and features four unique stages. During the tournament it will produce up to 20 hours of content every single matchday.

Stilwell arrived on site in Doha on 14 October but planning began over a year ago.

“Craig Lapsley and I share the workload at the Corniche set,” says Stilwell. “We’re part of an incredible team; nobody can do an event of this scale alone and it takes many experts to accomplish the task.

“I’m given the basic concepts and systems documentation eight months before the event, and I arrive six weeks before the competition goes to air. All the equipment is flypacked so when we arrive the kit is already here, but nothing is connected. It’s like buying a brand-new house when the inside is still a shell; the walls and doors are there but nothing else is set up. Our job is to make everything work.

“The audio EIC is responsible for everything that handles audio which means building, connecting and supporting every audio device within the studio complex, from all the kit in the ACR to all the I/O we have located around the studio set. 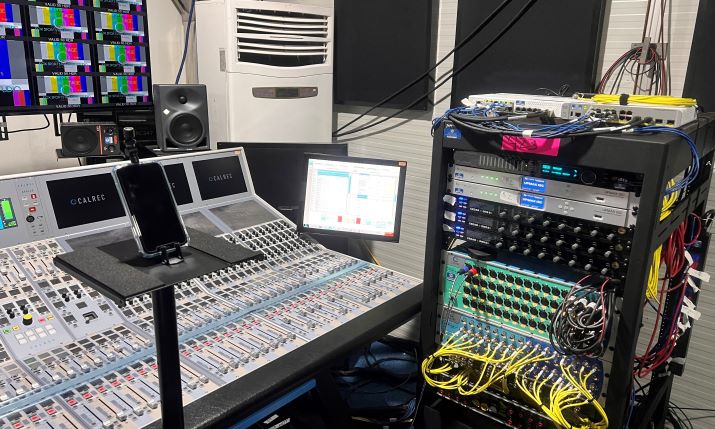 Building out and up

“We start with power, both primary and secondary, then domestic. We set up the mixing console at the heart of the control room and built out from there. We install the monitoring and then begin creating all of the input and outputs to the console which is based on detailed I/O schedules created by the A1 who will mix the show on air.

“However detailed these plans are, there are always new challenges to overcome. For example, during this build we discovered that a number of cables were incorrectly wired so we had to figure out another way to make it work. Acoustics is another example of something which can’t be planned; one of the hardest things is to make the room as quiet as possible in what is essentially a metal barn, but with acoustic panelling and some gaffer tape we can usually bring the room noise down to TV truck levels!

“Our first milestone is always when we can get our music playing out through the speakers in the ACR. We try to accomplish at least one benchmark every day, even if it’s just 1k tone to and from the set.”

The ACR set up at the Corniche set consists of two audio mixing consoles – a Calrec Apollo and a Calrec Artemis – and a full 5.1 surround sound monitor arrangement with five Neumann KH-120s for the main mix and two more for the submix position. EVS supplies the DVR and broadcast control systems, Riedel covers all the comms, Wohler provides local audio monitoring QC, Shure Axient wireless mics are used for talent and Studio Technologies supplies backup IFB and wired belt packs.

The addition of Cisco and Arista switches to the kit list hints at other very specific challenges. Although an audio EIC requires a detailed understanding of the system and how everything is connected, the addition of an IP environment introduces additional complications.

“This is one of the first big IP installations I have ever worked on and it’s a steep learning curve for everyone,” says Stilwell. “In the real word, IP core technology is still new and we’re all still learning how systems work; most broadcast engineers will understand baseband routers intimately, but IP is a very different discipline.

“The audio is in Qatar is all SMPTE 2110-30 and we have primary and backup networks for safety. NMOS registrations and control are managed by the EVS Cerebrum Broadcast and Control System, and we also operate numerous virtual local area networks (VLAN) for sub-systems like Dante and Wohler control.

“We have a great networking team and the network architects have enveloped many different requirements, but it necessitates much greater cooperation between venders. For example, a Calrec AoIP core doesn’t need NMOS to recognise a Hydra modular frame, but when you start connecting streams which need session description Pprotocol (SDP) data in NMOS you have to know how the networks treat that.

“Most of the main vendors have technical support staff on site and together we’re getting through all the issues. The biggest benefit we’ve had is the time and the opportunity we have all had to try and break things in order to know how to fix them! We’re learning a lot.”

“It takes a full day to go through the feeds in and out of the studio and we check every single one for timing. Then we recheck the feeds where there is lip sync; everything has to be in sync.

“Adding delay to counter latency is a good phase to be in though, as it means the build-up is getting closer to completion.”

The first live show from the competition is scheduled for 23 November, at which point Stilwell and Lapsley will provide up to 20 hours support every single matchday, with a one-hour handover between shift. This means that Stilwell’s working day will end at 4am.

He concludes: “There is literally a bus load of techs on site and when the World Cup starts, we are all a form of insurance and firefighting. Hopefully more of the former!”