The emergency concerning the spread of coronavirus has had a dramatic impact on the world of sport. The scheduled season-opening MotoGP race in Qatar on 8 March was cancelled due to the closure of the country’s airports and the inability of riders and technicians to reach the Losail circuit.

However, the possibility of continuing the Moto2 and Moto3 races remained, given that the teams and riders were already in place for some days before restrictions were put in place. The Moto2 race instead took over the primetime TV slot on the evening of Sunday 8 March.

A MotoGP statement explained: “As the teams and riders of the Moto2 and Moto3 classes were already in Qatar for the three-day official test at Losail International Circuit, the races of both categories are possible. However, racing for all classes has been postponed in Thailand on 22 March.” 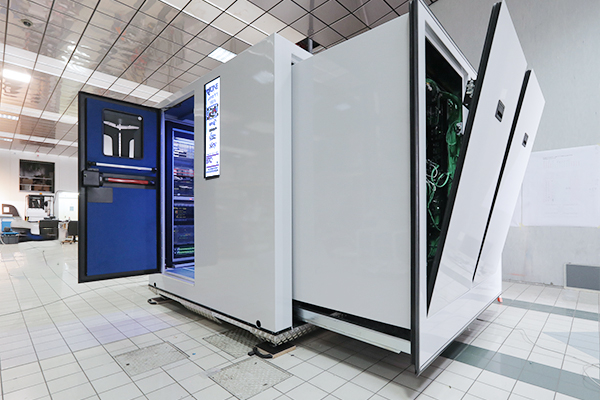 The filming of the events was entrusted to the Italian One-TV Professional Show team, which found itself managing an emergency technical situation. The central core for this production is called POD and was already in venue, but technicians and additional equipment were unable to reach Qatar due to the closure of airports.

The One-TV team, headed by technical director Andrea Gianolli, quickly organised a remote emergency gallery in Limena (the Professional Show headquarters in Padua) in direct and continuous link with the gallery situated at the circuit.

Starting from the first press conferences on Thursday 5 March, the master control room (MCR) set-up on site continued to operate by connecting the important production lines from broadcasters Sky, Canal+, BT and Servus TV via remote control to Italy, so that the Moto2 and Moto3 races on Saturday and Sunday could be transmitted as normal.

Andrea Gianolli told SVG Europe: “All the events were made possible through the use of the One-TV 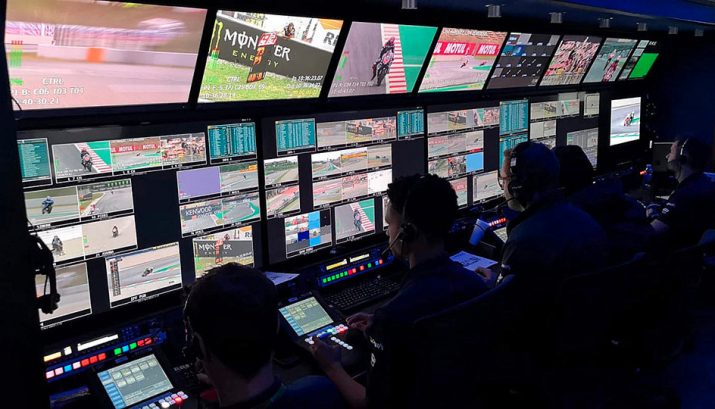 special system called ‘POD’ which arises from a new requirement in the field of television production: that of having a versatile mobile unit with top level equipment, but at the same time compact and transportable by air.

“Air transport becomes a fundamental requirement for the filming of television events that take place at very great distances from each other and in short time spans where the use of traditional OB vans would be impossible for logistical and reasons.

“Thanks to the know-how of Professional Show associated with the experience in the field of the One-TV subsidiary, this transportable system has been engineered by our R&D team. It includes a master control room (MCR) with four important production lines that can operate simultaneously – for example Sky, Canal+, BT Sport and Servus TV in the case of the MotoGP production.”

The POD is a 4K mobile unit set-up in a special expandable shelter, compliant with international air transport regulations. The size of the shelter (POD) is equivalent to two Grand Containers (GC) but with the further possibility of expansion. To keep weight to a minimum, the structure is built entirely in aluminum and light alloys. The shelter can also be transported on standard trucks, easily loaded and unloaded with forklifts. 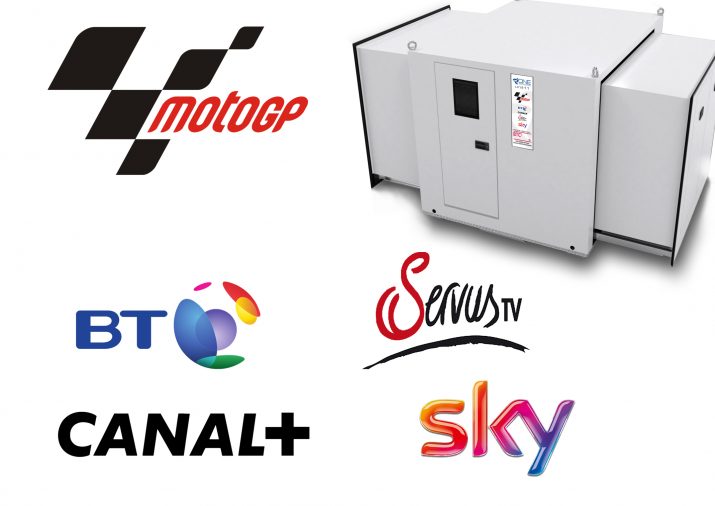 The central system consists of an Evertz EQX16 Router (288×288) matrix with nine multiviewers and twelve 55-inch 4K-HDR monitors. At the core of the four Grass Valley Korona video mixers is the new K-Frame X video production engine. Audio routing is via a Lawo Nova 73HD with ClearCom Eclipse intercom.

Other devices on board are Tektronix WFM 8300s, Leader LV5600s, Evertz Dreamcatcher and EVS XT3 recorders and replay systems. All system facilities are controlled by VSN Broadcast.

Gianolli said: “The arrangement of the equipment, accessories and supports inside the POD and the dedicated flight cases for the four galleries guarantees the safety of the equipment during transport and a remarkable speed and efficiency for assembly on site.

“This was a solution organised in ‘emergency’ but which, we allow ourselves to note, was possible only by using our team’s ability to better manage emergency situations by adopting ‘outside the box’ solutions.”