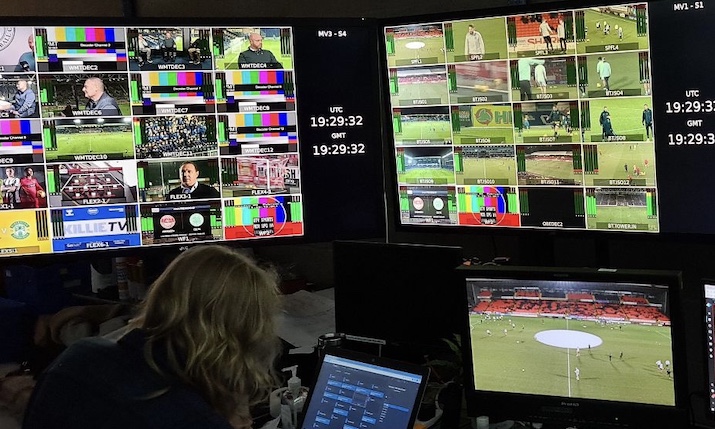 QTV is celebrating its busiest day ever after successfully completing 11 productions in one night for the Scottish Professional Football League (SPFL). The company was onsite for Rangers versus Hibernian and St Mirren versus St Johnstone, as well as handling remote production of Aberdeen versus Celtic – including producing the world feed for the SPFL – Dundee versus Motherwell and Ross County versus Livingston on on Wednesday 9 February. Live footage was also delivered for individual clubs’ streaming channels.

“We typically produce four matches per fixture round. That’s the first time that we’ve delivered three simultaneous remote productions,” says Jack McGill, CEO at QTV, speaking to SVG Europe. “There are occasions when Sky Sports don’t pick up a match and we will be required to cover five matches. So we’ve expanded our remote production facilities – from two galleries to three – and that was the first time the third one has been deployed in anger.”

The five fixtures consisted of three four-camera matches and two six-camera matches. However, the clubs themselves were also able to take advantage of QTVs central matchday production centre and access the live footage for their own streaming services.

“Some of the clubs produce wraparound content on match day in the form of studio presentation in the stadium. In some cases, such as Celtic, we facilitate that on behalf of Sunset+Vine, but in other cases we produce and put in the facilities ourselves,” explains McGill.

“In addition to the five OBs and three club studio productions, we also delivered two-camera coverage of the Ayrshire derby between Kilmarnock and Ayr United in the Scottish Championship; off-tube commentary and graphics for HibsTV, and had the SPFL’s world feed going out to the international broadcasters. It, effectively, was a total of 11 productions in one night.”

This feat was achieved through a combination of a flexible and talented in-house team along with a network of freelancers and technology partners.

“I think one of the things that we’ve developed over the course of the last two years is a really strong and multi-skilled in-house team. Our production management team has also built excellent relationships with the freelance contractors within Scotland’s production community,” McGill explains.

And that team is growing too, from 16 full-time staff pre-pandemic to 30 currently, with the engineering and technical production departments expanding most.

“We have technical directors here who are now effortlessly familiar with all the idiosyncrasies of remote production, and they’ve really made that their specialism,” he says. “What may have seemed daunting 18 months ago now feels routine.”

Staff are also able to be deployed in a number of different roles, depending on the scale of what QTV has to deliver on any given night, something McGill partly puts down to the company’s use of intuitive technology.

He expands: “None of this is possible without good relationships with technology providers. When we looked at how we were going to deliver remote production for the SPFL, it wasn’t just about how we would get the contribution into QTV it was also a question of what does that allow the SPFL to do with the footage? Previously, the SPFL didn’t have any live means of utilising their footage. We’ve built a matchday production centre to address that. This has allowed them to engage with a much wider range of partners, which has made the product better – more commercially attractive and it’s given domestic broadcasters and clubs the opportunity to improve the fan experience. That is only possible with the partnerships that we have with these providers.”

From a contribution point of view, BT Media & Broadcast carries all of the camera signals back in to QTV. Cerberus’ LiveLink system is used to transcode output and stream out to the various partners, whether that’s SRT, RTMP or Zixi protocol.

McGill adds: “LiveLink is used to schedule all of the feeds that go to the broadcasters, the betting partners, the data partners. It’s just an incredibly intuitive tool to do that and the support that we get from the Cerberus team is second to none.”

Graphics for both club TV and the world feed are handled using Singular.Live. “That’s proved an excellent addition for the clubs that are streaming – it’s really lifted the quality of their output,” he adds. “And we enhanced that this year by introducing the Cobb control application provided by Reality Check Solutions, which has allowed us to integrate live data from StatsPerform. We also utilise Grabyo every week for logging and clipping of all of the matches and Globecast has been our long-term partner in terms of satellite distribution of the world feed; they deliver a really reliable service.

“I think what makes this network that we’ve built and this workflow that we’ve designed so successful is that it’s with partners that have intuitive processes. There’s a user experience where everything is designed to make it as simple as possible for us to put the pieces together and make it all work seamlessly. The usability of the workflow that BT designed for us for contribution, the usability of the LiveLink system, the usability of Grabyo as a cloud-based editing platform, all of that means that our staff can develop their skills across multiple platforms and understand the end-to-end workflow.”

Looking back on a job well done, McGill concludes: “One of the most pleasing things is that everybody finished [on Wednesday night] unsurprised that everything had gone well. I think that’s a mark of the quality and consistency of the work that we’ve been doing over the past 18 months. On a personal level, I loved seeing the energy that everybody had the next day. Everybody came in really buzzing, there was a real positive energy about the place because I think people looked back and thought, ‘Wow, look what we did last night, isn’t that impressive?’ And it was – they’re right to feel that way.”