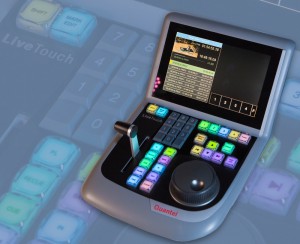 LiveTouch has been developed following close consultation with sports broadcasters and their on-air operators, and features a purpose-designed control panel to make highlights selection fast, sure and simple, meeting the rigorous needs of live production. At the system’s heart is the new 3U power-efficient LiveTouch server. Inter-server streaming allows multiple LiveTouch servers to be used as one large, virtual server, giving operators instant access to any clip irrespective of where it is being recorded.

LiveTouch also integrates Quantel editing. The workflow is two-way — editors can access the highlights with no media movement and any panel can play back any completed sequence. Thanks to Quantel’s FrameMagic technology, the system delivers fastest highlights-to-edit-to-air workflow — no media ever needs to be copied or moved and there is no need to duplicate storage for editing.

“We have tested LiveTouch with a number of major sports broadcasters around the world since we first showed it in prototype form at IBC 2014,” said Steve Owen, Quantel Marketing Director. “It has been very enthusiastically received, particularly the up-to-the-minute look and functionality of the control panel, the inter-server streaming and the integrated editing. And this is just the start; LiveTouch will grow rapidly in capabilities and applications over the coming months as our development team continues to drive forward what’s possible in sports highlighting.”