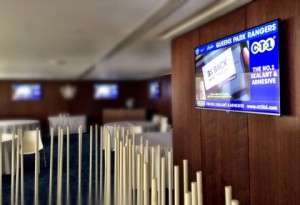 StadiumTV is Eleven’s most popular digital content platform and is currently broadcast at more than 40 venues, across football, rugby union and rugby league, including Newcastle United, West Ham United, Norwich City and Swansea City in the Premier League.

The platform is recognised by fans across the country for bringing the latest match action, club news, team line-ups and match details to concourses, but for the first time this season StadiumTV also features the club’s Twitter and Instagram channels as part of the broadcast.

StadiumTV was broadcast at QPR’s Loftus Road stadium for the first time on Saturday 28 November 2015, when 18,031 fans saw the R’s defeat Leeds United 1-0. Eleven have installed 51 high specification 50” LED screens within concourse and bar areas at the club, bringing additional and clear commercial benefits for club partners, sponsors and advertisers.

Eleven Sports Media’s managing director, Matt Cairns, said: “We are delighted to see StadiumTV added to the matchday experience at Loftus Road. Both QPR and Eleven are passionate about the digital experience of fans on match days, and the role that digital content platforms can play with fan engagement.

“It’s increasingly important that fans feel an authentic connection with their club and we believe that StadiumTV, with its integrated social media feeds, delivers that vital link. The modern football fan now sees Eleven’s product portfolio as an important fixture within the traditional matchday environment. We look forward to further developing the StadiumTV channel with the club in the future.”

QPR commercial director Euan Inglis said: “Over the course of the summer, we looked at what Stadium TV solutions were best in class for the fast evolving way that digital content is shown to fans on matchdays at Loftus Road Stadium. The integration of the club’s social feeds into the broadcast content is very exciting for the club’s media team, and to have the ability to zone bespoke content into individual hospitality areas gives the club additional inventory to attract new partners.”