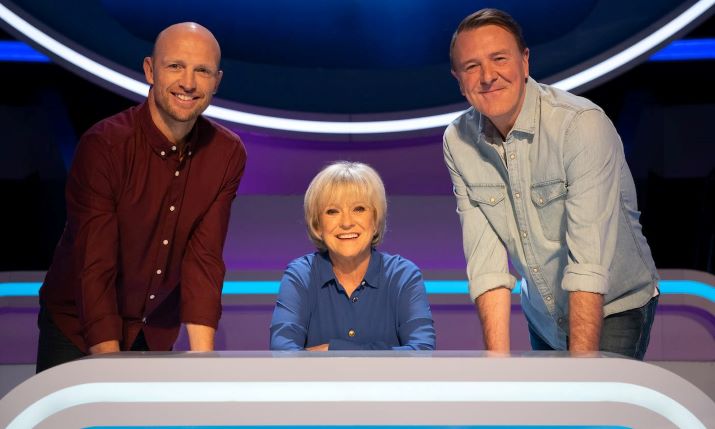 BBC sports quiz A Question of Sport is back on air at Dock10 following a hiatus due to COVID-19.

The longest continually running quiz show on TV began 2020 by celebrating its 50th anniversary in January.

A Question of Sport recorded eight episodes at Dock10’s studios in Salford, Greater Manchester, in March, just before the COVID-19 lockdown was announced. This number of recordings allowed the show to remain on air during the summer months.

The programme finally returned to Dock10 this month to record another ten episodes, hosted by Sue Barker alongside regular team captains Matt Dawson and Phil Tufnell, with suitable COVID-19 health and safety protocols in place to protect presenters and crew.

However, executive producer Gareth Edwards said coronavirus shooting guidelines led to two main obstacles for the production team, which needed to be overcome so they could make the series safely.

Firstly, the show had to shoot without an audience for the first time in its history. “There’s usually about 250 people in the audience, and they play a big part in the show, giving it a live theatre feel,” said Edwards, who worried that the comedy and humour that is so integral to A Question of Sport would feel flat without the teams and audience bouncing off each other.

Yet regular guests on the show said they were more relaxed taking part, likening it to a quiz they would play with friends and family on Christmas day. “It’s not that they wouldn’t want an audience back. But not having an audience gave it a more intimate feel,” noted Edwards.

Secondly, each team member needed to be two metres apart, a big challenge for a show whose long-running format sees teammates work closely together.

To that end, new desks were built to make sure the panellists were socially distanced.

The gameplay was also tweaked. Historically, each team will confer quietly together to work out an answer. If they are wrong, the other team can try to answer the same question for a bonus point. However, with teammates sat so far apart, such quiet conferring would be impossible and would hand the rival team a possible answer.

So the long-standing bonus point has been dropped from the socially distant version of A Question of Sport. Instead, the team captains and guests are encouraged to have their discussions out loud, something the production team have actively encouraged to help compensate for the lack of an audience.

“We dropped the bonus point for fairness in the first instance,” said Edwards. “But because we were lacking 250 people in the audience, we wanted to make sure there was an atmosphere in the studio still.”

Edwards has also worked with the show’s directors and camera, sound and lighting teams to make it look as if the teammates are not so isolated on screen.

“There were a few clever camera angles that we would use, not to cheat the fact they are two metres apart – because that’s quite clear on the wider shots – but to give a sense that they are a team,” continued Edwards.

“I was quite insistent that we weren’t hiding the fact that they were all distant, or that there was no audience. We wanted to celebrate that fact,” he added.

Edwards said that he and the A Question of Sport production team felt safe filming at Dock10, having been in regular contact to discuss COVID-19 shooting guidelines before returning to the studio. “Everyone took it so seriously. It wasn’t for the first hour that everyone was abiding by the guidelines and distancing rules. That was maintained from the first minute to the last minute.”

For those who were unable to make it to the studio for health reasons, Dock10 also provided a remote viewing feed that allowed them watch episodes being recorded remotely. “I was hugely impressed,” said Edwards. “There was no drop out or time delay. It was so smooth, like being in the room.”

Dock10’s remote viewing platform is just one of many technical innovations that iconic shows like A Question of Sport have rapidly adopted to keep the cameras rolling during the pandemic.

The first of these socially distant episodes will be broadcast on Friday 4 September at 20:30 on BBC1.