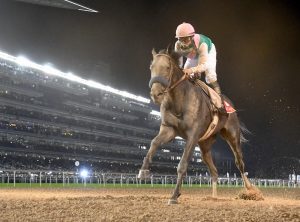 Racecourse Media Group (RMG) has been awarded another two-year contract by Meydan Group to provide production and distribution of the full horseracing season at Meydan Racecourse, which began last Thursday (9 December) and culminates with the US$30m Dubai World Cup card on March 31.

Timeline Television will provide broadcast facilities and crew to support RMG’s host production and on-course coverage to broadcast the races to audiences around the world. RMG, which has produced and distributed horseracing from the flagship racecourse in Dubai for the previous two seasons, is offering a number of exciting broadcast rights packages for the 20-fixture season, hosted by the Dubai Racing Club.

Frank Gabriel Jr, Executive Director of Racing at Dubai Racing Club, said: “Racecourse Media Group provided first-rate production and presentation of racing from Meydan for the last two seasons and RMG also took the event to new and increased audiences via their distribution. The 2017 Dubai World Cup was the first horse race to be broadcast live on airlines and cruise-lines via the Sport 24 channel and NBC Sports also broadcast the card in the US.”

Richard FitzGerald, CEO of RMG, added: “We are delighted that we once again can partner with Meydan and work together in successfully showcasing this world-class racing.”

The domestic season, which gets underway with a competitive seven-race card today, leads into the $10,870,000 Dubai World Cup Carnival, which starts on January 11 and takes in 10 fixtures, before climaxing with the world’s richest day’s racing, the Dubai World Cup with total purses of $30million.

The Dubai World Cup nine-race card boasts five Group 1 contests and three Group 2 events for thoroughbreds, plus a Group 1 race for Arabian horses. It comes three weeks after ‘Super Saturday’, the official prep day for the Dubai World Cup, but a top-class meeting in its own right, with more than $1.8m on offer across seven races for thoroughbreds, including two Group 1 races.

Created through the vision of HH Sheikh Mohammed Bin Rashid Al Maktoum, Vice President and Prime Minister of the UAE and Ruler of Dubai, the racing is set against one of the most iconic sporting theatres, the state-of-the-art Meydan Racecourse. The architectural masterpiece measures 1.2km in length and can seat over 60,000 in its grandstand.