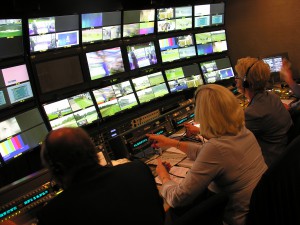 Every year during August, York Racecourse hosts what it calls its oldest, richest, fastest and most famous races – the Ebor Festival. Established in 1843, the four days combine top class horse racing with music, fashion and fun. Television coverage for the UK’s Channel 4 is provided by IMG, with OB facilities from NEP Visions.

Of course, horse racing is a round-the-year sport and Channel 4 offers 90 days of coverage each year, including every Saturday. All that means a great deal of planning for the production and technical teams.

“It’s a classic cliché – once you finish a big OB, you start on the next,” states IMG’s executive producer, Carl Hicks. “Actually, it’s more than that. We are planning the next OB, while working on the current one. Obviously, we have a template for how we have done things previously, but there are always new things to consider. This year, for example, for the Ebor we had to change a couple of camera positions because of demands from the course. And that means good liaison with the racing industry and the individual course officials.”

That close relationship pays off. When the course decided to build a new weighing room, the production and technical teams were closely involved with the architects and this allowed cable drops to be installed. “This provided us with camera positions and they were put to good use during the Wednesday meeting at the Ebor when there was a stewards’ enquiry. Our viewers were able to watch live while the stewards quizzed the jockeys over the outcome of a race.”

The incident backs up Hicks’ assertion that coverage is far more than just showing the races. “We are on air two-and-a-half-to-three hours a day, but the races only last seven-to-eight minutes so, as a producer, you’ve got a blank canvas between the races that needs to be filled. And that allows us quite a bit of time to explore all aspects of the sport, which is really nice from a production point of view.”

He continues: “We follow the summer narrative through the various festivals – Royal Ascot, Newmarket, Glorious Goodwood, and then this one at York. Each begets the next, so editorially we are following developing stories with the major races, horses, jockeys and trainers as the season moves on.”

For that reason, one of the vehicles parked in the broadcast compound at York contains Channel 4’s archive of races going back between 10 to 15 years. “My job is to make sure that every story is followed up. And for that we need to have enough resources at our fingertips.”

Alongside those archives, the resources that help in the storytelling include the use of jockey cams to enable viewers to get a rider’s eye view of the race. “My job as a producer is to make the whole programme work as a televisual experience for the audience and participants. This year we have put a monitor in the weighing room so the jockeys who carry the camera can come out and talk to us about it. So if there has been a controversial incident we can see it from the jockey’s viewpoint.”

Controlling those all-important resources is IMG programme director Denise Large. She has directed Channel 4 coverage for almost 20 years and over that time has been responsible for introducing many innovations.

“To help tell the story, we have provided coverage at all areas of the courses,” she says. “And the distances are unlike many other sports. We are collecting action from many different places, the stables, pre-parade ring, parade ring and all the way to the start. And then after the race, there are other activities to cover. The Ebor at York is quite tricky because of the huge size of the course.”

To provide the best coverage for the Ebor meeting, Large has close to 20 cameras at her disposal. In addition to the cameras provided by NEP Visions, Large has access to those used by Race Tech – the provider of production for the UK’s dedicated racing channels. The stewards also use these sources if an enquiry is required. “I have talkback to the Race Tech director and we work in close liaison.”

She continues: “For our more in-depth coverage, we send cameras to extreme parts of the course. Where the distances are considerable, we rely heavily on radio cameras.”

Large says that the use of Steadicams has increased over the years. “They can easily move around and provide us with coverage within the parade ring, and allow a reporter to interview a winning jockey on the way back from the course.”

One of the challenges, explains Large, is managing all those resources to ensure they are in the right place at the right time.

“I feel quite proud of the fact that we’ve been able to bring in jibs, especially for using at race starts, spy cameras and super slo-mo cameras,” says Large. “In 2013, IMG was the first to use super loop slow motion cameras for racing, and a year later we used the first Radio Frequency Hi-Motion camera. This year at the Grand National we utilised a Hi-Motion camera on the back of our tracking vehicle.”

That tracking vehicle, based on a 4×4 Land Rover, was built by Nick Murray of Aerial Camera Systems (ACS). He, along with cameraman Paul Baldwin – Biff to his friends – operated the vehicle at the Ebor meeting. Sitting on top of the vehicle is a Nettman Systems stabilised mount housing a Sony 950 camera with a Fujinon 42 x lens and block. The remainder of the camera assembly is located within the vehicle itself.

“The operator sits in the specially adapted racing seat in the back of the vehicle to control the camera and the stabilised mount,” explains Antonia Wood, sales & marketing manager at ACS. “Both crew members have a very skilled job with the driver monitoring the output of the camera, the distance the horses are from the vehicle, as well as tracking them around the course.”

The remote controls for the camera include the normal pan, tilt, zoom and focus, but also a roll control to allow the shot to remain parallel to the horizon even on rough terrain.

Driving along the course roads next to racing circuit does present its challenges. “The course is open to the public, which means the crew have to be extra vigilant when travelling around the area,” says Wood. “The tracking vehicle is equipped with special warning lights and an escort vehicle is provided for the duration.”

Radio links to send pictures back to the scanner are provided by Broadcast RF. 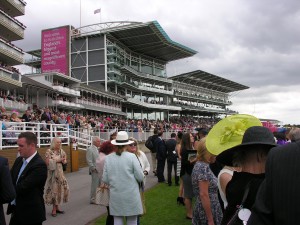 A very large crowd gathered for Ladies Day at the Ebor

Looking after that link, and all the other technical aspects of the Channel 4 coverage, is NEP Visions’ unit manager, Jon Harris. “In all, we have four long term radio channels that stay with the truck that is dedicated to the racing coverage. As well as the tracker, the channels are used for the start jib camera, radio cameras and Steadicam that are in constant use.”

Fibre, of course, provides most of the links and at the majority of venues permanent cabling has been installed. “We inherited some infrastructure that is quite old, but we have also installed a great deal of new cabling and fibre over the last few years,” says Harris. “Every race course is different, so there is no normal template for carrying out this part of the operation.”

Harris says that having a scanner that is set up purely for horse racing means the crew can start rigging just one day before the first transmission and know all will be ready in time. “The truck is configured in the way the director wants it and we know that it will work.”

One of those configurations involves the use of the Grass Valley Kalypso switcher. “Normally, break bumpers would be played in from the transmission centre at Red Bee, but because timings can be critical with the start of races, we play them from the truck. Our vision mixer, Marcus Read, has set up the desk so that all the bumpers are saved as macros and he can activate them and select for transmission in the normal way.”

Three EVS systems are used for the racing coverage. At the end of each day, the operators will compile an archive to be transferred to tape. “In addition, there is a log created of incidents which may occur during each race and this is entered into a database,” says Harris.

Sitting alongside the two Chyron operators providing the onscreen graphics is a third operator who supplies betting information. “The graphics template allows us to pull up archive files in an instant. When a jockey or trainer’s name, for instance, is recalled, details of previous histories and other relevant information are available to the producer to add to the graphics.” 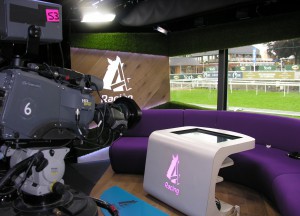 The purpose built mobile studio based includes a Hega Table

A dedicated studio mounted on a trailer travels to each race meeting and is parked where its window provides the best backdrop to the presenters. Polarised glass is used to allow for the differences in light levels inside and outside of the studio. “As well as a presentation studio, it is used as a technical hub for us,” explains Harris. All the talkback and radio links are remoted from here – and that has proved very efficient.”

A multi-task studio manager looks after the facility, taking care of such operations as attending to microphones for presenters and guests, and adjusting camera control units as required.

Incorporated into the studio is a Hego table that allows presenters and pundits to call up replays. “The presenters can talk to the EVS operators so that specific incidents can be clipped and sent to the Hego table. The return feed to the scanner allows that material to be played out as the presenters discuss what the viewers are seeing.”

Clearly, the programme works for viewers, too. Channel 4’s coverage of the 2014 Crabbie’s Grand National scooped the Broadcast Award for Best Sports Programme. Produced by Carl Hicks and directed by Denise Large, it attracted 8.5 million viewers.

Hicks concludes: “We are always conscious of the boundaries of the sport, and with the help of the racing authorities and the course officials themselves we need to keep pushing the barriers. That we will continue to do.”