Racing to the top: Sky Deutschland F1 presenter Sandra Baumgartner on the art of staying focused and achieving your goals 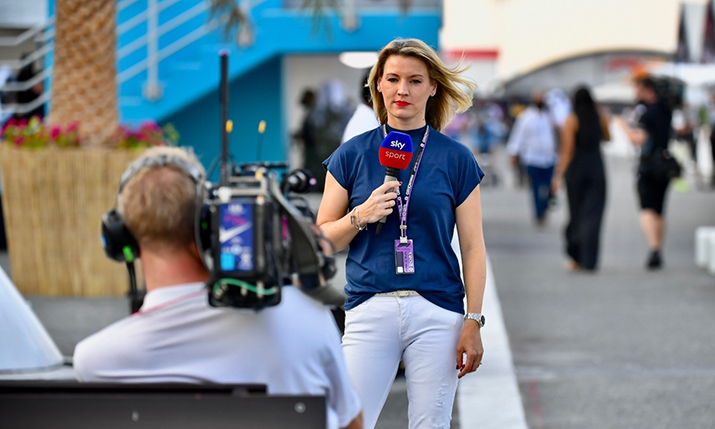 Sky Deutschland Formula 1 presenter, Sandra Baumgartner, decided she wanted a career on television when she was just a teenager. She has used that intent to get herself in front of the cameras to represent the top tier of motorsport to German fans, and for Sky Germany, that means an average audience of 800,000.

She comments: “Already in my last year of school I knew I was interested in TV broadcasting and I wanted to know how it works, so I decided to try my first steps in this industry directly after my exams. I got practical training in a small local production company and I haven’t looked back since.”

Changing landscape for F1 in Germany

Sky Germany’s long term rights deal with Formula 1 that commenced in 2021 has changed the landscape for not only the broadcaster, but also for Baumgartner. Including Germany’s first 24/7 channel dedicated to Formula 1, the deal and the hours of coverage it requires has cemented Baumgartner’s role as a permanent part of the F1 team.

“You have to adapt to changing situations quickly, stay calm, don’t overreact if something unpredictable happens, and you have to feel safe in every situation. Clear communication with your team is the key”

She comments: “Over the last 30 years F1 was not exclusive in Germany, and when in 2021 Sky became the only broadcasting partner [in the country], it was a big step for the company and also for us as the editorial team. There was much more attention on our programme than in the years before, and it was a great opportunity for us to evolve our way of broadcasting.

“[When the deal was announced] my role changed in that I became a fixed part of the Sky Sport F1 Team. Becoming the exclusive broadcasting partner for F1 in Germany was a big step for Sky and also for me. Becoming a mom in 2018 also changed things a bit for me, but in the end I’m happy that I can arrange my family and my job pretty well.” 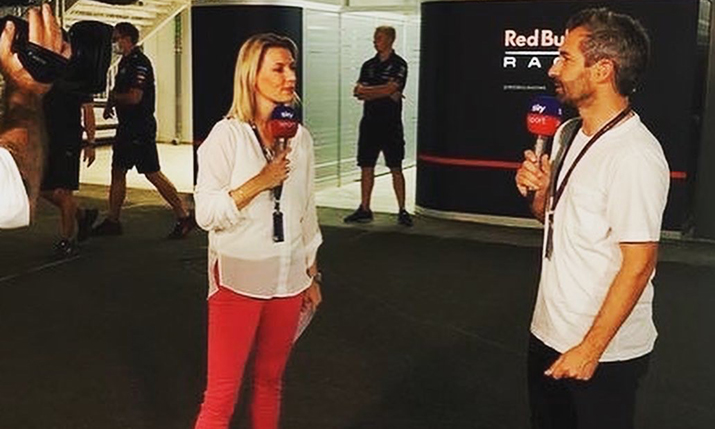 Baumgartner’s career is a textbook example of what can be achieved when you set your mind to something. She says: “After my practical training I started an apprenticeship in the same company [that I had joined straight out of school], which was two years long. I did several different TV productions like daily mags, documentaries and corporate videos for industrial clients. I started out as an editorial producer, and now, after many years as a freelancer, I joined a motorsport company [Motorvision TV] and found my way from behind the camera to on-air and in front of the camera.”

Eventually, it was time to move on, she says: “I needed a change from what I did back in 2010 and at this time Sky Germany started Sky Sport News Channel. They were looking for editorial staff, reporters and presenters. After applying for this job I did several castings and I joined Sky Germany in 2011 as a TV reporter for mainly motorsports, which is my absolute passion.”

She adds: “It is hard getting a job in F1 broadcasting in Germany because there are just few roles available. I’ve worked hard and constantly over the years, and all the work paid off in the end. I was always into motorsport but didn’t really focus on getting a job in it, so I think it was the right place at the right time to bring my passion and my job together.”

After nine years she moved again from Sky Sport News to Sky Sport F1, to give the premier tier of motorsport her complete focus.

Coming into sports broadcasting as a young woman was challenging, Baumgartner states. “I first had to assert myself, with colleagues as well as with interview partners. In my early days I felt I had to prove I belonged there, and that I did have the professional expertise to do the job.”

Today, as an established presenter and expert in Formula 1, she is able to give advice to those looking to move into the same area. “You have to adapt to changing situations quickly, stay calm, don’t overreact if something unpredictable happens, and you have to feel safe in every situation. Clear communication with your team is the key.”

To other people out there looking to follow in her footsteps, Baumgartner states: “If you really want to do it, the fight is worth it. Believe in yourself, believe in your abilities, but don’t do it just to become known. Always remember how privileged you are.”

She adds: “Bear in mind that there is no time to rest when you’re working, and when you’re preparing for work. You have to work on your abilities, on-air presence, and network constantly. Sometimes it is hard not to lose faith in your own abilities, to be patient and to persevere. Travelling a lot can be hard also, especially when you have a family.”

Yet despite the challenges in getting into motorsport presenting in Germany, there is a lot to enjoy about the work. On what is her favourite aspect, she exclaims, “everything!”. Continuing she says: “The job itself, the people I work with, all are excellent. Our team consists of great people with whom I enjoy spending time and working.”