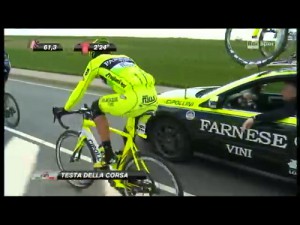 Digital transmission and fibre cabling is improving the quality of this year's coverage of the Giro d'Italia.

Giro d’Italia, the most important cycling tour in Italy, is nearing its closing stage, as riders and the RAI production team complete a circuit of more than 3,500 km. And for race fans around the world, this year’s coverage has looked better than ever, thanks to some big technical improvements.

“The technical leap forward [for] engineering and final on-air quality is definitely huge for us,” says Enrico Motta, Rai’s head of projects for Rai Produzione TV Grandi Eventi, a sister company of the network that has its own OB units and produces the big events for Italian viewers. “We are also testing high-definition shooting although it is only for internal use this year.”

From a technical point of view, several major changes were started the last year and are now complete, including the move to optical-fibre cabling and all-digital acquisition.

The race is captured using eight cameras on motorcycles and two cameras on helicopters, the signal transmitted to the modular control room via helicopter. 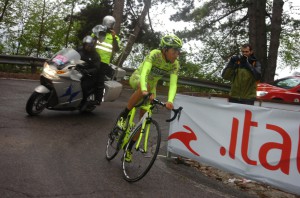 Even the cameras on moving vehicles like motorcycles and helicopters are now being transmitted digitally. The move to digital has also allowed more signals to be transmitted because the control room can now handle six incoming feeds as opposed to only four analogue feeds, which were also limited to only one incoming feed at a time via helicopter link. But today all six signals are simultaneously delivered.

During the night, the OB vans move to the next stage of the race and settle near the next finish line. That requires a production team and equipment list that needs to fit the production perfectly so that it can quickly move and be set up for the next leg.

“Our tech facilities are exactly what is needed, not even one more or less than necessary, though everything is redundant,” adds Motta of a team effort that also involves the RAI Engineering Department and its head of operations, Ubaldo Toni.