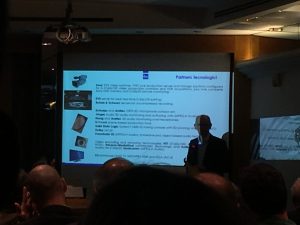 Coverage of the inaugural European Championships was placed under the spotlight during the 10th edition of the SMPTE Emerging Technology Seminar in Milan.

During the event, RAI director of the research centre and technological innovation Gino Alberico examined the experimentation carried out by the broadcasters during the Championships, including with new television formats such as 4K and high frame rate (HFR) on T2, UHD on 3GPP and others.

Alberico focused on at least three of the primary developments highlighted by SMPTE, namely:

1) Consolidation of full HD technology based on a progressive digital serial (SDI) video signal (50 frames/second) in 2K, with improvements in both resolution, HFR, luminance (High Dynamic Range) and colour (WCG, Wide Color Gamut), as well as with NGA (Next Generation Audio);

2) Use of the most advanced UHD technologies, such as 4K and 8K for a wide range of purposes, including broadcasting on conventional television networks (terrestrial and satellite) and computer networks;

3) Broadband connectivity with 5G, fifth generation mobile technologies and standards, which allow performance and speed far superior to current ones and, above all, low latency, so as to allow the transportation of images in UHD.

The results of the tests carried were intended above all to understand whether it is worthwhile, and possible, to work effectively in the new formats. The tests were carried out by RAI in tandem with EBU, other members (RAI, BBC, France TV, ZDF, RT research institute) and about 20 industrial partners, who set up a complete chain of filming, processing, recording and distribution of live UHD content with HDR and NGA.

For filming the cameras were Sony HDC 4300s, used in conjunction with a multi-vendor system capable of producing, storing and processing 2160 P100 signals with HDR and all that is needed to achieve near-real-time editing, with uncompressed recording.

For audio, RAI selected an immersive audio workflow for production and monitoring, but with an agnostic approach to the actual technology (Dolby AC4, MPEG-H, etc). In addition to the NGA signal, two mono and audio description comments were delivered in English and French.

The first part of the experimentation was, in fact, to bring the video and audio signals together on a transportation and distribution chain. Here everything has worked on the DVB standard and there are no missing ‘rings’ in this chain.

The production chain envisaged not to double the flow but to use 8 cables and SD-SDI signals – so no IP as yet. The HFR production chain involved machines that processed equal frames and odd-synchronised frames, ie. two parallel chains.

In production, several signals were produced, one at 2160 P100 with HDR-HLG, SDR back compatible, with stereo audio (as there is still no way to process both UHD and NGA audio in a receiver, to test the NGA it was necessary to scale to an HD signal at 100 Hz). A 1080 P50 stream was also produced to power the 5G trial.

All signals were sent via satellite and then aired in Italy and Monaco, as well as via fibre in Glasgow. For the transportation of the UHD / HFR signal, the only uncertainty that still remains is with regards to the backwards compatibility; it can be done in many ways, for example by putting everything on a single PID to transmit it. The problem is the non-backwards compatibility of current Phase 1 UHD TV sets.

Another way is to unpack this signal on two different PIDs; on one, the equal frames are carried and on the other the odd ones and therefore a non-HFR phase 1 television are able to deliver a signal taken at 100Hz at 50Hz, albeit with some inconvenience, like a “strobing” effect more or less visible depending on the content of the image, the inner movement and how the filming was conducted (shutter all open or 180° and so on).

This strobing is manageable if the Motion Compensation Frame Interpolation function is present in the receiver. Others proposed modes of transmission with double PID but on one flow inserting the odd and even frames and on the other the difference between odd and even frames, with the related coding problems of the two flows in order to make them compatible (the problem of the retro-compatibility in transport is to be debated by the DVB consortium at a meeting this December).

The transmission was carried out on a satellite 3 degrees west to 65 MB that carried all services, one with video 2160 P100, about 28 / 30MB in HEVC with audio AAC (with some problems because these bitrates are not yet managed in constant mode), so the decoder optimization is still needed; the second service brought video with HFR and HDR but in HD resolution with the various flavours of NGA alternating over time (every half hour), and the third service that was intended as a contribution to the 5G network. All was irradiated (a flow at a time, of course) on the DVB-T2 network in Val d’Aosta (trial from 7 to 10 August, first day with T2 in the air and other days in 5G), on two channels bringing both UHD to 100Hz and HD to 100Hz to allow them to be viewed side by side.

The reception took place on LG TV sets with appropriate software updates. For the NGA part, the Dolby decoding took place in the TV with user interface screen control and 5 + 2 discrete speakers; the MPEG-H part was rendered with a simple front SoundBar. The immersive effect and the yield were regarded as pleasant.

Among the audio results, there is a feeling that the user interface in which a listener can choose which object to listen to, decide the volume with respect to the background, and place it in space are rather complex menus for the general user at present. It has been suggested that it is better, perhaps, to create presets offered by the broadcaster that simplify the user interface.

For broadcast on 5G, all European broadcasters are trying to bring to the 3GPP table the service requirements for broadcasters, especially for distribution and production (still in progress). The motivating idea is to make it possible to receive non-SIM services or standalone broadcast services and others that need to be carried forward the standardisation of 5G.

Today the system is taking advantage of the 14th release of 3GPP that uses all the bandwidth assigned without having to depend on a unicast mode, hence a pure broadcast world or “supplementary downlink” from the network to mobile terminals without other connections can be achieved via SIM.

Regarding the diffusion of the frame rate required for the coding, the increase is only around 20%, but much depends upon the content and a possible pre-processing element (to reduce strobing). This constitutes an insignificant increase in bit-rate.

In terms of backwards compatibility, the shots made at 100fps and 360° shutter tend to give a better quality of the base layer at 50fps compared to the 180° shutter case.

Regarding the pivotal question “does the same content seen in the comparison between shooting at 100Hz and 50 Hz show an important qualitative leap?”, the answer was: “It depends a lot on the content and how the signals are set up. The official comment on this data is that it requires further in-depth analysis to provide correct scientific data, compared to the method used.” Another comment is that “in general we could say that on some sequences you appreciate a greater fluidity of the movement, but without a direct comparison between HDR and HFR you might not grasp the improvement.”

In any case, the EBU has enriched its library of test sequences with further material that is made available to all. Concerning the HDR / HLG issue, there is a substantial confirmation of superior quality performance of HDR in shooting situations with High Dynamic Range, such as in stadiums or during evening events.

Several production streams have been tested to manage simultaneous HDR and SDR outputs with minimal intervention on the production chain. As per the 5G, it is confirmed that even from broadcast towers it is conceivable to offer a service in SFN mode, with good coverage results in outdoor and vehicular mobile reception (within certain distances). Everything works even without a unicast network, and the service can be contained in a single broadcast mode; even the terminals manage to correctly manage the HEVC part.

It still remains to be seen how the new phones that are described as being ‘HDR ready’ will behave with a similar signal, although 5G devices are expected to hit the market only around 2020/21.