Rally like a virtual pro: Behind the scenes of FIA World Rally Championship’s eSports strategy

eSports has long been part of FIA World Rally Championship’s (WRC) global strategy, yet it has had to wait for technology to move forward to enable it to really go to town on the gamers. 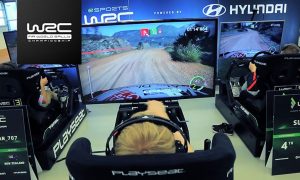 Driving rally cars like a pro in the eSports WRC series

WRC has been in the gaming business significantly longer than many motorsports, comments Marc de Jong, director of business development at WRC Promoter, and team project leader on interactive gaming. Speaking to SVG Europe, he states: “We published our first dedicated WRC video game in 2001, and since then we’ve licensed 18 games. We’ve been in eSports long before it was called eSports!”

Long time in the making

Early on in the game – 17 years ago in fact – WRC ran a one-off eSports competition. De Jong says: “In 2002 we did a global WRC Challenge with Sony Playstation. We invited the 18 national winners to come and play in the final at the Rally de France that year, and the ultimate winner took home a car. It was at that point we realised it was great to watch gamers in real time, competing at actual events, so we’re very experienced in this field.”

However, due to a general lack of suitable connectivity globally, WRC has had to wait for technology to catch up to its eSports aspirations. 2016 was the year things finally came together and WRC was able to run its first virtual competition under the banner of eSports WRC.

WRC chose to work with French game development studio, Kylotonn, for the second time, and game publisher BigBen Interactive for the first time, to create the 2016 version of its game, WRC 5. Notes de Jong: “In 2016 we launched the then latest official iteration of the WRC game, WRC 5, and the stars aligned. Alongside the game launch, we launched eSports WRC on WRC 5 with the support of WRC competitor, Hyundai.” 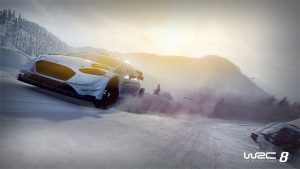 Realistic visuals from the upcoming WRC 8, out this autumn

From 2016 the WRC has evolved its approach to its eSports series. Notes de Jong: “The first year we held a qualifying round in parallel with the real world WRC. We held eSports rounds online and after 10 online rounds and two online semi finals, we invited the 18 top players to come to a live rally event, which was the final round of the real world WRC Wales Rally GB, so the two finals – real world and eSports – were held together.

De Jong adds: “In the first two seasons over 2016 and 2017, we were focused on building a foundation. The technology was our biggest challenge. When it comes to our eSports strategy, the focus is all about getting the basics right. There are a lot of technology challenges with [eSports]; you have to make sure everyone is able to compete on equal footing and that we are able to hold the final with no glitches. We wanted to get a fair, entertaining experience in place, which was definitely a challenge, so that was our focus for the first two seasons.”

Going on, de Jong notes: “We’ve repeated that effectively every year, with two changes. The third season was about enhancing and enriching what we had, evolving it to be a more attractive competition, so from that perspective in 2018 we shortened the season and created the Team Competition. Our real world season lasts 11 months, but in 2018 we shortened the eSports season to nine months; in reality we found it was difficult to keep gamers engaged for 11 months, so it felt a little better to make it more compact.” 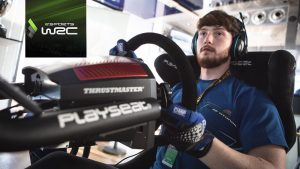 Racing to the finish line at the 2018 World Finale

It is key to give the players direct feedback into bettering the game itself, and therefore to motivate them to keep playing, states de Jong. “In eSports your gamers and viewers are everything. It’s easy to say they’ll play the game as it is, but in reality there are so many details that make the game more attractive. At Kylotonn last month we had an open day where we invited leading eSports players to give their feedback on the game for 2020 already.”

De Jong states that the live finals attracted around two million views on various social media outlets and WRC TV. In addition, there were 13 million views of videos that BigBen Interactive and players uploaded during the qualifying sessions for the last year’s eSports WRC season.

eSports is a tool for the WRC to further engage with its audience, says de Jong. Its viewership for the real world WRC is already in the same general age group as eSport gamers, so the WRC does not need to use eSports to bring in more punters, as other motorsports are aiming to do with their eSports strategies. Instead, it uses it to enhance the experience of being a WRC fan, both for real world and eSports, together.
Strategy for success

Explains de Jong: “Our strategy is based on three pillars; we want to educate, engage, and entertain. It just so happens that video games as a channel attract a younger audience, but as a demographic, WRC attracts that group anyway – 16 to 35 year old males – which is a younger demographic than most motorsports. That stands testament as the amount of games we’ve published; we’ve had a new game out nearly every season since 2001.

“eSports is a communication channel; it enables us to talk to younger audiences, but that’s not all it’s about. We want them to engage with the cars, learn more about the drivers and about how our sport works. It enriches our total comms strategy.” 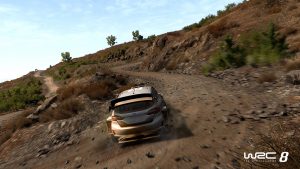 eSports is hyper-realistic in the new game edition, WRC 8, to be used in the 2020 series

The ‘eSports WRC powered by Hyundai’ series allows more people to experience what it is really like to get behind the wheel of a rally car, states de Jong. He explains: “A video game is the closest you can get to experiencing the speed, excitement and visceral excitement of driving a World Rally car. Circuit racing is good, but rally racing is one better, and on the game you can do it all without leaving your home.”

Backing up de Jong’s statement that the WRC 7 game is very close to the real thing is the fact that Jon Armstrong from Northern Ireland is not only the current eSports WRC Champion, but also an aspiring rally driver. When he could not get a sponsor for the 2018 season, he entered eSports WRC instead, “to fill the void,” according to de Jong. He adds: “The way Jon described it, obviously it’s different driving a real rally car versus a video game; in the game you don’t get the bumps from the road that you get in real life. But the environment and the pressure you find yourself under is the same. He told me that, “you can feel adrenalin pumping through at the finals,” so his rally experience translated directly through your body to gaming.”

Another gamer that has gone in the opposite direction is Sean Johnston from the US, who was a runner up in a major eSport competition in 2011. He then took up the real sport and this year is a Junior WRC rally competitor.

Accessible to every racer

“What we value a lot in our eSports experience is that it’s accessible to everybody,” says de Jong. “We create different levels to aid that; the top level is the ultra competitive eSports WRC, where maybe 5,000 to 10,000 gamers commit to practicing for hours every week – even every day – but other people want a little bit of fun and to give it a go, and they make up around another 200,000 players. eSports, like all other sports, works on many levels, and we try to reflect that. We try to cater for the top of the pinnacle of the pyramid as well as the grass roots of rally fans,” de Jong concludes. 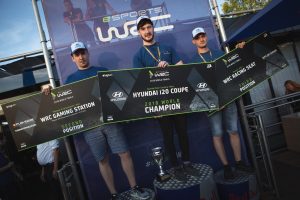 It’s all to play for in the eSports WRC series

Drivers on the 2019 eSports WRC series have to commit at the beginning to playing the WRC 7 edition of the game on either PC, XBox One or PS4. In all, 12 rallies are held, with 10 rounds out of 12 will taking place at the same time as an official real world WRC rally with gamers earning points at each round. The eight best drivers worldwide are invited to compete in the Grand Final, which will be held in conjunction with a WRC real world rally, either in Turkey or Great Britain this autumn (the location is yet to be announced). The winner will take home a Hyundai i20 road car.

Meanwhile BigBen Interactive is set to launch WRC 8 this coming autumn in anticipation of the 2020 eSports WRC season, which will begin in January 2020.