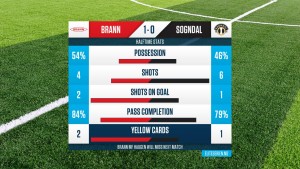 RCS also teamed up with Discovery Networks Norway (DNN) to develop a complementary graphics package for its studio programming.

Led by Fotball Media COO Hallbjørn Saunes and supervised by Norsk Toppfotball Marketing Manager Martin Ygre, responsible for the Eliteserien and OBOS-ligaen brand, the collaboration between Fotball Media and RCS began in May 2016. Leading up to the season, RCS created and delivered a clean match graphics package using Vizrt. For smooth integration of match data into graphics, RCS built the package on its Foundation data service, which sorts and combines real-time data feeds from Opta with templates, making it easier to display data-driven graphics live. RCS also worked closely with production partner NEP Norway to deliver the new look, which appears in every Eliteserien match broadcast.

“Developing graphics for Eliteserien, Norways premier league, while simultaneously creating a new brand structure for Norwegian football has by far proven one of our most ambitious projects yet, but with RCS by our side, we were able to deliver a fresh, new style of graphics that enhance the fan experience,” said Saunes. “We’ve also been working closely with RCS and DNN to ensure consistency between our new brand graphics and their match graphics. It’s been quite a journey thus far and we’re proud of what we’ve accomplished together.”

“For the 2017 season we rebranded Eliteserien and updated OBOS-ligaen. Graphics is a vital part of the brands visual profile and how fans experience Eliteserien and OBOS-ligaen,” explained Ygre. “RCS has been superb in understanding the identity of our leagues and developing cutting-edge graphics that make the brands come alive. We’ve thoroughly enjoyed working with the RCS team, and are thrilled with the overall result.”

Building on Fotball Media’s new design, RCS and DNN teamed up on a new graphics package unique to the DNN brand that is being used in its Eliteserien studio programming, which airs on Eurosport Norway, Max, TV Norge and Eurosport Player. It includes a bottom ticker for live scores, standings and breaking news, a permanent score strip that populates real-time scores and clocks displaying elapsed match time, and a comprehensive package of interfaced sidewing graphics. RCS has also built a similar package for DNN’s coverage of other Norwegian football properties including OBOS-ligaen and Mester Finalen. The RCS crew was on-site prior to and during launch to provide technical support for both Fotball Media and DNN.

“We wanted graphics that would reflect our core values, promote our Eurosport brand, complement the look and feel of Fotball Media’s new match graphics, and could easily adapt across viewing platforms. We knew it would be a tall order, which is exactly why we turned to RCS,” said Morten Johannessen, executive producer, Discovery Networks Norway. “They bring unrivalled quality, innovation and experience to every project, hitting the mark every time. We’re impressed by the look and functionality they’ve brought to our production and look forward to continuing the relationship.”