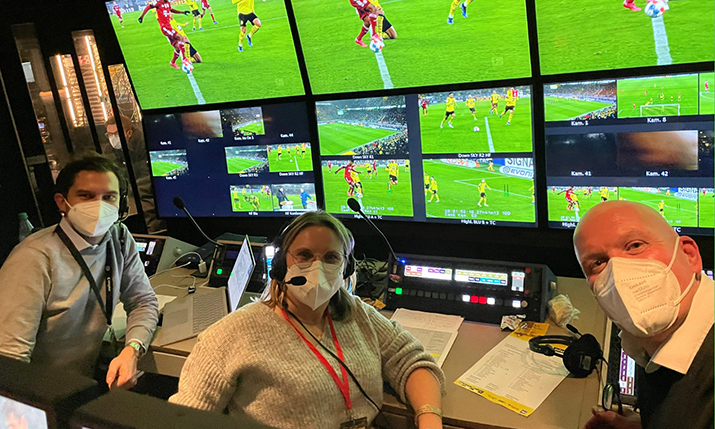 Working as a football producer is perfect for Sky Deutschland’s Miriam Mueller, “because I like sports and football,” she says. “And to pack this passion into a show; that’s fun for me,” she goes on.

“During the week we think about what we want to address in the show. The cooperation in the control room with other colleagues with the different jobs is great, and those roles intertwine.

“At the end of the week we will bring this plan on air at the weekend. It’s great seeing your ideas realised on the screen, presenting the content developed during the week to the television audience.”

Mueller comments on how her passion for the beautiful game has led her to her current role: “I’ve always been interested in football and sport in general and have followed many broadcasts with interest. That’s why I studied journalism and found out, that I enjoy working on television the most.

“In addition, I found out through a few internships with television editors, that I would like to work on sports broadcasts myself.”

“You also have to be open to work at the weekends and other unusual hours. It can be hard to balance family and friends with the unusual working hours”

After graduating from high school Mueller studied journalism, until she eventually moved to Sky Germany on a traineeship.

She comments: “My first job was an internship in the sports department of Bayerischer Rundfunk [public-service radio and television broadcaster, based in Munich] during my studies. Then I did an internship at the German Football Association, the DFB, and worked a lot for DFB.tv there. Both only encouraged my goal that I wanted to be a sports journalist.” 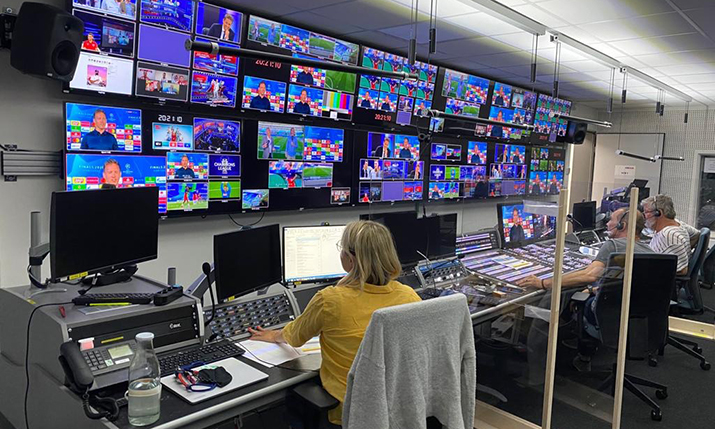 Sky Deutschland’s Miriam Mueller says: “The biggest challenge is that we try to present the sport in a balanced, fair and neutral way. Although most of us are fans ourselves, in our profession we have to separate that”

While at Sky Mueller was able to try out a plethora of roles during her traineeship. She explains: “I could work as a filmmaker, plan shows – both in the news and in the sports department – or even do interviews at a football game.

“In the end, I decided that I wanted to plan and implement programmes as an editor,” she goes on. “After my traineeship, I did a lot of football shows and was able to gain a lot of experience as a result. I started with small football programmes, then I did the top game in the Bundesliga as an editor. Just like many Champions League programmes, I covered the final several times and the DFB cup final every year in Berlin.

“A highlight right at the beginning of my traineeship at Sky was the ‘Finale Dahoam’, the Champions League final in Munich in the Allianz Arena 2012. Here I saw for the first time how a host broadcaster produces large sports events, what is behind it, and how much effort such a large event is.

“There have been many projects that I really enjoyed,” she goes on. “The 2012 Champions League final in Munich was a highlight, just like a DFB Cup final in Berlin. And the live broadcasts from Wimbledon are also a highlight in my schedule every year.”

“Thanks to my strong specialist knowledge and a lot of commitment, I was immediately accepted and respected in our football editorial team (where mostly men work),” she adds.

There are challenges in the job, however. Mueller explains: “You also have to be open to work at the weekends and other unusual hours. It can be hard to balance family and friends with the unusual working hours.

“The biggest challenge is that we try to present the sport in a balanced, fair and neutral way. Although most of us are fans ourselves, in our profession we have to separate that.”

On what draws Mueller to a career in live sport, she says: “What appeals to me is that football and the industry are constantly changing. There are many opportunities to develop further, for example there are many new technical possibilities that we can work with. This makes working on a show easier, nicer and better.”

2022 is hopefully going to bring Mueller more opportunities to direct. “I’ve started directing shows in the last two years. I would like to do this more often in the future.”

To other women looking to move into live sports production, Mueller concludes: “Be diligent and don’t give up immediately. If you love sport and want to show it on TV, then it’s the right place for you. Here we can bring to people what we would also look at ourselves.”