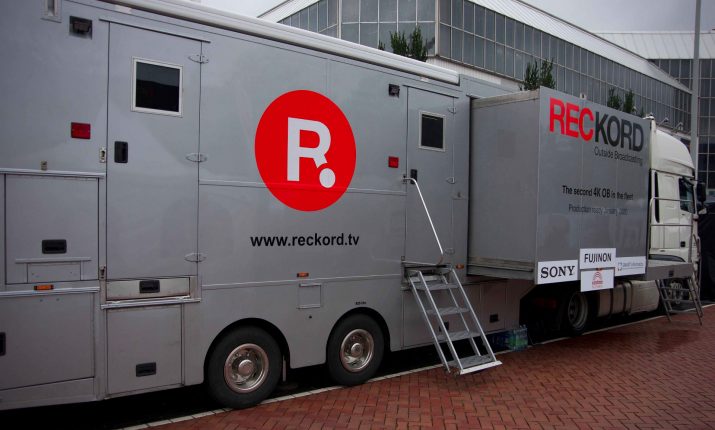 RECkord Outside Broadcasting, based in the Czech Republic, is currently building its second UHD truck, REC10, which should be completed by the end of the year. Its first UHD OB, REC7 4K, has been in use for three years, and has done about 10% of its productions in UHD – the rest in HD.

While the older OB has two production galleries, for main and secondary feeds, REC10, has one. RECkord’s owner and CEO, Robert Kallista chose Sony HDC-4300 cameras for REC7 after seriously considering moving to Panasonic, and is sticking with the 4300 with Fujinon lenses for REC10, along with Sony monitors and Sony’s PWS-4500 slo-mo servers.

Where REC7 has a Kahuna switcher, he has opted for a Sony XVS-7000 model for the new truck, because “we got a good price as a package,” he explained. The company also has Sony switchers in most of its other OBs. “We’ve always had a strong relationship with Sony, they fit into budget and are reliable.” Besides, “putting a lot of equipment into a bundle makes a lot of difference pricewise.”

The big attraction of the 4300 cameras was the ability to obtain 3x super slo-mo from any camera, which has proved to be really useful for its productions. Opting for the 4500 servers rather than going for EVS was a challenge, as it took time for operators used to EVS to become familiar with the 4500, but “it works well,” particularly with accessories like the Media Gateway, to transcode all the outputs — meaning they can quickly turn around drives the clients can take away with them with all the cameras as iso recordings in XAVC.

The new truck will also have Riedel intercoms, plus Apantac multiviewers on openGear frames, with Axon 4K processing, conversion and distribution.

“It was important for us to do a 4K truck, because we stayed relevant to clients and can offer 4K when it comes,” he explained.

“These are UHD trucks, but they are also powerful HD trucks,” he added.

REC7 can handle up to 20 cameras (in HD), but is normally used with 12 to 14 cameras, while REC10 will be a 12-camera unit. The new truck is 2m shorter than REC7, and has been repurposed from a previous HD unit.

“The chassis can last so much longer than the technology inside,” he said. “We expect to have it in operation quite a long time still.” Everything, including the design, air conditioning, power and full installation, is being done in house.

One significant gain from using the latest technology is the reduced amount of space it requires. 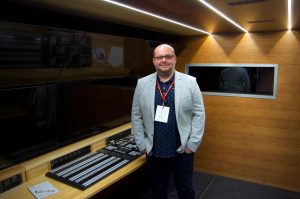 RECkord CEO Robert Kallista inside its new REC10 UHD OB, which should be on the road soon

Whereas the old HD configuration had 14 racks on the left side of the truck, which restricted the amount of space available for people, the UHD unit will need just four racks, all at the back, “so we can fit more in to less.”

REC10 used to have separate sections for engineering, vision control and production. Now it is one open space for everything, with glass doors that will usually remain open, making it more pleasant to work in. The truck has one expanding side, being used for the slo-mo area.

RECkord also has a more compact, currently empty HD chassis that it is considering converting into an 8-camera UHD vehicle in the next year or so. “We always have at least one chassis ready as an empty shell just in case,” he explained.

Kallista decided not to go IP. “It seems too early to be honest. We see it as still developing, and we’re watching the technology with interest, but we’ll do it when the time is right and when it makes sense to do.” It’s not a matter of cost (“There’s a small difference”), but of compatibility. “For us it would be a big jump,” particularly as you have other OB companies on site and need to be able to exchange signals, and everyone knows how to do it in SDI.

“It’s certainly a future, but I don’t think we are there just yet,” he said.

So far RECkord has done very few sports productions in UHD, although it has covered the Speedway Grand Prix in Warsaw, which in 2018 was the first UHD transmission in the Polish market for Canal+. It has also worked on classical music for Arte and various pop concerts in 4K.

“It was important to have a 4K truck ready in time when Canal+ did its first transmission in 4K. Everyone was still learning how to do it properly. It was really important we learnt together and made it work together. It was a big experience for us,” he explained.

Nonetheless, “4K is a very small market. The demand is still for HD.” However, there is a new channel in Poland dedicated to UHD, Canal+ 4K. “Poland is our primary market, it is so much more mature than other countries in the area,” he said.