A record 300 sport-production professionals flocked to the NH Amsterdam Grand Hotel Krasnapolsky on Thursday for SVG Europe’s fifth-annual Sport Production Summit. The afternoon of diverse and illuminating case studies, panel discussions, and networking provided attendees with plenty of insights and reflections on 12 months of sport-production progress just as the IBC Show kicks off in Amsterdam this week. 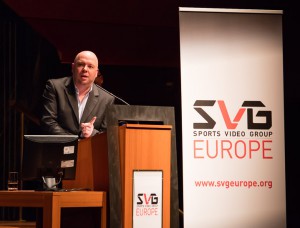 “It seems every year I say, ‘Look how far we have come,’ but here I am saying it again this year.” said SVG Europe Advisory Board Chairman Peter Angell, COO of IEC in Sports. “With more than 300 [attendees] this year, I think we can firmly say that this event has been established as the kickoff of IBC. This event is all about the chance to network, discuss, talk about what to see at IBC, inform and educate each other, [and] hopefully, to do a lot of business.”

New to the format for 2015 was a series of special presentations by SVG Europe’s Platinum-level sponsors: Dolby, EVS, Harman Group, and SOS Global Express. Title sponsor TATA Communications kicked the day off, with Richard Craig-McFeely, global business development director for media services, highlighting the company’s ongoing F1 Connectivity Innovation Prize, a new contest that will award a grand prize of US$50,000 to a winning team or individual. 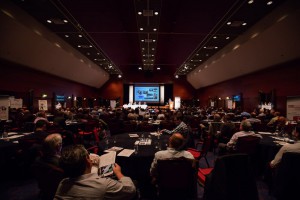 The Summit drew a packed house of more than 300.

Panels at the Summit, which drew the largest audience of any SVG Europe event to date, offered a look at new approaches in OB design, the potential of immersive audio for sports, and a view from the top with industry leaders from Sky Italia, DirecTV, CTV OB, Fox Sports Netherlands, and IMG Media.