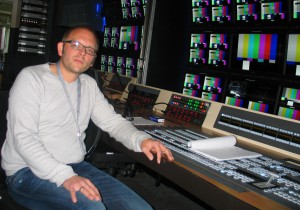 With its IP-based OB van the Cologne-based outside broadcasting service provider RecordLab TV & Media GmbH sets a new benchmark in live production. The 16-camera car, which is equipped with Lawo’s new V __ link4 system, was used in Germany for the first time at the beginning of June for the Brainpool production TV Total Autoball World Championship 2014 in Cologne’s LANXESS Arena.

“Compared with conventional point-to-point connections, the interlinking via IP offers big advantages for productions because we don’t have to operate every remote station and every box with a separate cable from the OB van anymore,” says Markus Maschke, CEO of RecordLab TV & Media GmbH. “We go out with a main and can distribute from there. We can leave from any point where such a box is with the IP device again and have all signals which are included in it immediately in every remote station.“ This becomes possible thanks to the interlinking via V __ link4 units, enabling all signals to be available in the Cloud so that they can be accessed directly by the OB van as well as by every stage box.

IP-based production heralds significant time-savings and allows the final pictrue to be stored in the Cloud and accessed from anywhere.

“There are no more direct camera ways to the OB van, but the cameras are connected to the box, brought in [via] the network world and made available there according to the different [areas] like video mixing, slow motion, audio production and camera control,” says Felix Krückels, business development director at Lawo. “As an audio and video interface in the network, a stagebox can record four SDI signals and generate again as well as record and generate 128 audio signals. At a soccer game this means that at every position (left gate, right gate, commentator box, studio) four camera signals can be recorded and generated.”

At the production of the Autoball event the pictures were distributed in the arena in HD quality to about 30 external monitors. Among them were the backing monitors in the studio, the commentator’s position, the clocking and graphics systems, and in the editorial and production offices. Furthermore, there were field monitors which delivered the picture information to the field reporter so that he could see when he was on the air.

In addition, other programmes were distributed via a terrestrial HF ring all around the arena. Parallel to this conventional in-house channel it was tested to feed the programmes into the network so that the editors can get access to them by notebook or tablet in the future.

The 10 Gigabit fiberglass line in the arena is sufficient to also move eight signals from the OB van in and out of the Cloud. “This suffices this production. If we count that, we don’t need so many signals,” says the OB van operator. “We only think in the classical point-to-point connection but we need to think in a Cloud-based way because I don’t have to store a signal twice [when] I already have [it] in the Cloud.“

It is, of course, crucial how many stage boxes are to be deployed and which kind of resources are needed in order to fulfil the demands. For the Autoball World Championship there were a total of 18 cameras placed in the arena, among them LDK 8000 cameras from Grass Valley, two LDK 8300 Super Motion from Grass Valley, four chip cameras from Riedel (which were installed in the cars) and two other wireless Grass Valley LDK cameras.

With the deployment of IP-based live production it becomes possible to reduce expenditure at the transmission of big sports events such as ski jump or soccer because it is not necessary anymore to pull cables over several miles. This can mean that the work of eight cable pullers at the back of the OB van can be done by only one employee with a cable drum.

“In the soccer stadium one box is located relatively centred and two other boxes [are] often behind the goal,” says Maschke. “With the old format that would require 3 x 500m cable. Now we only need 500m once and 50 or 80m twice depending on where the box is positioned. This is a spatial work simplification.“ In addition, a second OB van can dock via a network cable at the back of the new OB van and obtain immediate access to all external signals.

With the V __ link4 system from Lawo the Cologne-based service provider currently has a strong selling point in Germany. “Our aim is to be prepared for the remote production. We want to be able to distribute our boxes on long-distance networks in order to generate camera connections over a long distance.“

This kind of technique is required at productions such as cycle races or marathons in the city. “We have to put out cameras  over very wide distances because a triaxial cable connection won’t work any more,” says Maschke, noting that the aim is to place an IP-based box there and send the camera images via the long-distance network to the OB van.

The new OB van had its world premiere at the Red Bull event Wings for Life – World Run 2014 at the beginning of May, which was recorded live in Salzburg. “It was the first time that a marathon took place at the same time in 34 countries which we displayed in our broadcast centre.”

Over a dish farm, 34 satellite signals were processed to a world feed and sent out again. “The OB van used all its capacity. Besides the processing of the 34 broadcasting signals from the various countries we also handled the signal distribution in the corresponding external production rooms, for example the clocking, race control, social media and so on. Furthermore, we set up the complete EVS system. In the broadcast centre 92 intercom systems were set up. In addition there were about 100 television monitors for the various crafts outside the OB van, as well as 12 EVS XT3 servers which ran SDTI-and Gigabit-link up and were fed with all clips via a big Isilon storage system.

An essential advantage of the IP-supported technology is that the images don’t require any more post-production in the OB van because this has already been taken care of at the source. When the signal comes in at a customary production, the image can be edited digitally with the frame synchronizer in the OB van. In the network world the device is doing this job right away when the signal appears. The V_link4 system brings the unsynchronised signal via Framestore into the OB van and corrects the colours at the source. “This way the picture is already processed for everybody who receives it from the broadcast cloud,” says Krückels.