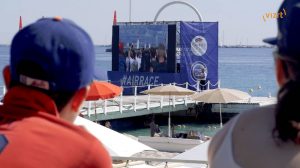 Created by RedBull in 2003, the Red Bull World Championship sees some of the most skilled pilots in the world compete to fly flawlessly through the racetrack, passing giant air-filled gates with precision while trying to set the best time. The pilot finishing the track in the fastest time takes the race victory.

Tens of thousands of fans gather around the world to watch this exciting motorsport competition live, while even more fans tune in to the live video production that is enhanced with augmented reality (AR).

A race at this scale can be tricky to watch from the ground. Fans want to know how fast the pilots are going, if they pass the gates correctly, and how did their competition do?

“The Red Bull Air Race is a sport which is hard to understand if you just watch it, because you don’t see the difference between two pilots,” said Stefan Koch, TV Director at Red Bull Air Race “The key is to attach people to the story.”

Red Bull Air Race, together with the production company netventure, have taken innovative approaches to grab the viewer’s’ attention and explain the air racing action. For the fans in the stands, several big video walls are in place. These video walls show race data visualised by netventure using Vizrt graphics tools that allow to share the excitement in real-time.

The real-time graphics are controlled with Viz Trio, which gives an operator full control of which pilot’s stats to share and when. The graphics and the tools to manage them play an instrumental part in creating an exciting story for both the live audience onsite and viewers on TVs and mobile platforms.

The second innovation created by Red Bull Air Race and the support from netventure is the Ghost Plane. The ghost plane allows a visual head-to-head comparison between two pilots.

“They (Red Bull Air Race) wanted to add some more excitement during the competition since you cannot have two airplanes in the race track at the same time,” said Antonio Bleile, virtual graphics developer at netventure. “They wanted a tool to visualize competitors against the actual flying pilot.” 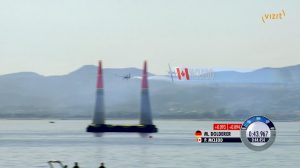 A real raceplane overlaid with an AR plane is the ideal solution for the audience to see in real-time who is winning. Accuracy is the key for a feature like this to work properly. netventure developed a plugin for Viz Engine to read flight data from the cockpit and apply it to the AR plane. Viz Engine has an open architecture allowing users to develop their own plugins to work specifically for their storytelling needs.

Red Bull Air Race also wants to share the emotions of the pilots with the viewers. To this end, cameras have been installed inside the cockpit of each raceplane to capture every cheer or disappointment of the pilots. In addition, the pilots are interviewed on the ground as soon as they get out their planes. These interviews are recorded and ready to be broadcast live, with the help of a Vizrt partner EVS. The input from the recording is edited with Vizrt graphics by netventure and shared live on the video walls and broadcast live through Red Bull Air Race

“Emotion is part of successful sports event. Combining Vizrt’s graphics with the adrenaline rush of the planes racing at high-speed through the track, the Red Bull Air Race is one of the most exciting new sports today,” said Yan Heydlauf at Vizrt.