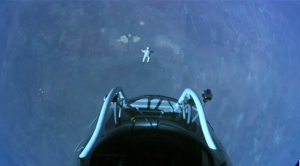 Whether it was camera-tracking mounts developed by NASA or mini GoPro Hero cams used by amateur snowboarders, Red Bull Media House pulled out all the stops in delivering a live video feed that broke live-streaming records and captured the imagination of millions more around the world.

“It’s been a long few years in the making,” says Scott Gillies, head of technical operations and co-producer of Red Bull Stratos. “The production team and the mission teams were deeply entwined, which makes it a very unique event where we all worked together as one.”

The Red Bull Stratos skydive teamed Red Bull Media House with a hodgepodge of production partners, including Flightline Films, Riedel Communications, Origin Digital, Level 3, and others. In the end, the live feed of Baumgartner’s 128,100-ft. free fall garnered a YouTube-record 8 million concurrent streams (280 digital syndication partners streamed it) and was picked up by 80 TV outlets in 50 countries. 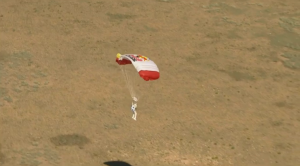 As many had expected, the event suffered from several weather-related delays, which only added to the buzz surrounding the Stratos jump. Originally scheduled for Oct. 9 and then Oct. 11, Baumgartner’s capsule and the stratospheric balloon finally took flight from Roswell International Air Center in New Mexico on the morning of Oct. 14. These delays further complicated an already complex show for Gillies and his crew, but, fortunately, they had accounted for that possibility in advance.

“Going in, we just assumed we were going to be there for two weeks, so we all learned a lot of patience,” says Gillies. “It’s like nothing else I’ve seen. When you are going to produce the Super Bowl, you know what day the game will be played — rain or shine; you can book the satellite time months in advance. And this was a global satellite booking, so it was no small undertaking.”

With the assistance of the resident meteorologist, Gillies worked to book satellite time in windows most likely to offer favorable weather conditions, often booking 72 hours in advance and then canceling if the forecast changed.

In addition, the Red Bull Media House team was able to choreograph much of the show and camera-switching during the two manned flights and two unmanned flight tests over the past year, ramping up the size of the production with each test.

The compound in Roswell was composed of mission control, the production offices, the media/press center, and Lyon Video’s MU8 mobile-production unit, along with the nearby capsule launch pad. Riedel tied the entire compound together with its Artist Digital Matrix fiber-based communications system.

In addition, all video signals on ground were distributed and routed with a Riedel fiber-based MediorNet real-time network. A total of 24 Riedel MediorNet nodes were installed in a redundant ring topology to prevent a connection loss, and the main system was connected to the launch pad via a MediorNet system with two MediorNet Compact frames. 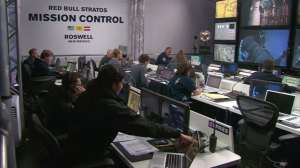 Inside Mission Control at Roswell, NM

The MediorNet backbone transported all video signals of the Red Bull Stratos mission, as well as signals from the OB truck and the tracking truck. It also distributed the broadcast audio between Mission Control and the recording facility.

“We didn’t need a [signal-]distribution truck because we had Riedel Communications involved from the beginning,” says Gillies. “We took advantage of their MediorNet for distribution on the compound and for distribution of all the signals from the capsule side. They made it possible for our imaging crew with Flightline Films to remotely switch cameras in the capsule.”

Red Bull Media and Flightline Films also set up two ground-based tracking vehicles equipped with three cameras apiece. To capture the shot of Baumgartner rapidly descending in the air, these cameras were outfitted with massive optical telescopes, as well as newly refurbished and updated tracking mounts that were used by NASA during the Gemini missions of the 1960s. 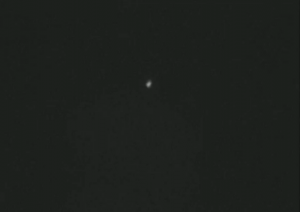 The infrared shot of Baumgartner’s dive

“When you saw the image of Felix tumbling and glowing white hot, that is an [infrared] camera on the back of a telescope with the tracking mounts we acquired,” says Gillies. “Flightline Films was responsible for that, and it was really impressive. To see a man 127,000 ft. away is amazing; you just can’t do that usually.”

The capsule
A total of 40 cameras were deployed in the capsule, on Baumgartner himself, and on the ground. The capsule was outfitted with nine Lux Media Plan HD1200 miniature cameras, three RED ONE cinema cameras with MX sensors, and three still cameras. 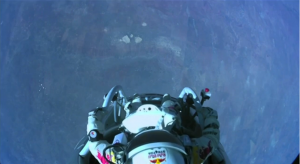 Baumgartner before he begins his dive from the Stratos capsule

The CCU for the Lux cameras was located in the “keg” (a housing that resembled a silver beer keg) atop the capsule, which was packed with dry ice on the ground to keep it cool and surrounded by a pressurized housing filled with nitrogen gas during the flight. The cameras themselves required no specialized housing.

“A lot of this was for redundancy and imaging for situational awareness,” says Gillies. “Not only were we thinking about the broadcast, but we were also thinking about what the team needed to see with these cameras in case there was an emergency.”

In addition, 13 Panasonic P2 recorders were on hand to capture all the footage. All cameras were recorded onboard in full 720p but were downconverted to SD for the live feed. When the Stratos team began to design the capsule nearly three years ago, there was no HD micro-transmitter on the market that could deliver the reliability and low-heat standards necessary, so Red Bull went with SD transmitters. Riedel provided the on-board video-control system for the nine Lux cameras and three video downlinks dynamically assigned to the selected cameras.

“We were blown away with how good it looked, considering it was SD,” says Gillies. “And then the second that the pod hit ground, we pulled that footage and now have loads of HD content.”

The production team also worked very closely with the event team to integrate data telemetry into the show. Such data as the Moving Map, speed, Baumgartner’s oxygen level, and so on were transported via Riedel MediorNet and input into a graphics system developed by Germany-based graphics provider NetVenture. This information was integrated into the live stream.

The diver
Meanwhile, Baumgartner’s suit was outfitted with five GoPro Hero HD mini wearable cameras, one on each limb and one in his chest pack. These cameras (essentially off-the shelf models) were not transmitted during the live stream but were able to capture HD POV shots for use in post-dive distribution.

“Up until the last flight, we had some different cameras,” says Gillies. “We always had a GoPro in his chest pack, but we made a game-day decision to go with all GoPros because we were really pleased with the ability to remote-trigger so [Baumgartner] could hit one button and automatically turn them on in record mode. We flew them without any housing on the camera, and the heat from the camera itself kept it going the whole time through the atmosphere.”

Smooth streaming
Perhaps the most impressive aspect of the production — aside from the jump itself, of course — was the lack of buffering and pixelation in the live stream watched by U.S. viewers. Despite record audiences and the obvious challenges presented by a live telecast from 24 miles above the earth’s surface, reports of streaming issues were few and far between.

Red Bull Media House brought on Origin Digital and its Live Events Automation Platform (LEAP) to help distribute the stream to devices around the globe. The live stream was sent via satellite from Roswell to Origin Digital’s encoding facility in Denver, where it was encoded and fed to YouTube’s CDN. The live stream was then played out on the same video play YouTube used for its record-breaking work at the London Olympic Games last summer.

“I considered Web broadcast and international broadcast to be on an even playing field,” says Gillies. “I tasked Origin Digital with ensuring that the screen health was good to all of our digital distribution points.”

Outside of the U.S., Gillies relied on Level 3 for much of the international distribution, booking an HD path and redundant SD path as backup. In the end, the feed reached 50 countries on every major continent.