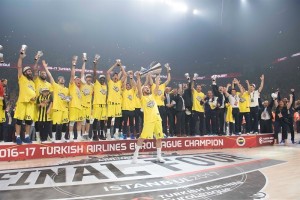 Fenerbache Istanbul overpowered Olympiacos Piraeus 80-64 in the championship game of the Euroleague Basketball Final Four weekend in Istanbul, May 19 to 21. The event saw a world first for sports production as referee body-cameras delivered VR 360 content inside the perimeter of the court.

Euroleague Basketball collaborated with body-camera specialist FirstVision and production company Mister Fogg to produce and deliver footage recorded with the body-cameras to basketball fans. The recorded VR clips were released on YouTube on May 24 and can be viewed here.

Following the historic weekend in Istanbul, SVG Europe caught up with Barcelona-based FirstVision CEO Roger Antunez to learn more about the use of 360-degree cameras on the bodies of the basketball referees.

You were in Istanbul for the Final Four?

Yes I was there for the production last weekend. It was the first time, so there was a lot of tension of course, but it went really well. All the videos are online already for all the games and everyone is pretty happy about the content and the reaction of the fans and the press. We are really happy.

So what exactly was the ‘first’ at this Final Four?

As you know very well there have been lots of efforts in sports over the last months in VR. Leagues like the NBA are regularly producing content on the game that offers really cool point-of-view that nearly puts you inside the court – the ‘best seat in the house’.

There have been a lot of VR productions at court-side, but this is the first one that has been inside the court. We are using 360-degree cameras on the referees. The premiere here is that they are body-cameras.

Everyone is pretty excited about this because normal VR is already very immersive. The feeling for fans when you watch the NBA, for example, is very impressive. But when you see this, it really puts you in the middle of the action.

For example the moment of the jump ball; when the referee gets the ball from the refereeing table and walks to the centre of the court it literally seems that you have the ball in your hand. You see the texture of the ball, the referee walking – it’s really, really impressive. The intensity of the immersion is amazing.

What is the camera system used?

FirstVision is a body-camera company and we have developed the technology ourselves. We have been in the market for three years and we have a jersey camera that does live transmission with radio frequency. We also have a version of the product that is specially targeted to ice hockey.

We have a long background in terms of safety and comfort for wearables, made for the athletes. Sometimes our cameras are worn by referees instead of athletes – but most of our productions are with the players.

This is a new product release, a different version. It has one lens in the chest – like our traditional cameras – and another one in the back. Each lens is 185-degree of field of view; with one lens in front and one lens in the back we can create the 360-degree image for the VR experience.

This was the first use [of this technology] in an official game in any competition. No-one has used this before. There are plans to do a live VR version for the Euroleague 2017-2018 season. Live VR will work with radio frequency transmission, the same way as our regular jersey cameras.

It’s the same sort of technology, but with two signals instead of one. It’s something we’re working on and during next season there will be pilots with Euroleague Basketball for live 360-degree cameras.