The 2020 Heineken Champions Cup and Challenge Cup finals, staged by European Professional Club Rugby (EPCR), are taking place this weekend in England and France. The second-tier Challenge Cup final between Bristol Bears and RC Toulon kicks off on Friday evening at Stade Maurice-David in Aix-en-Provence with France Télévisions 4 delivering the World Feed for EPRC, supported by AMP Visual TV.

Exeter Chiefs director of rugby Rob Baxter told the media this week “this is the biggest game in the club’s history”. Racing 92 star fly-half Finn Russell said “Racing have won the [French] league before, but they’ve never quite managed to win a European title, so to be the first team to win a European title would be huge for the club.” 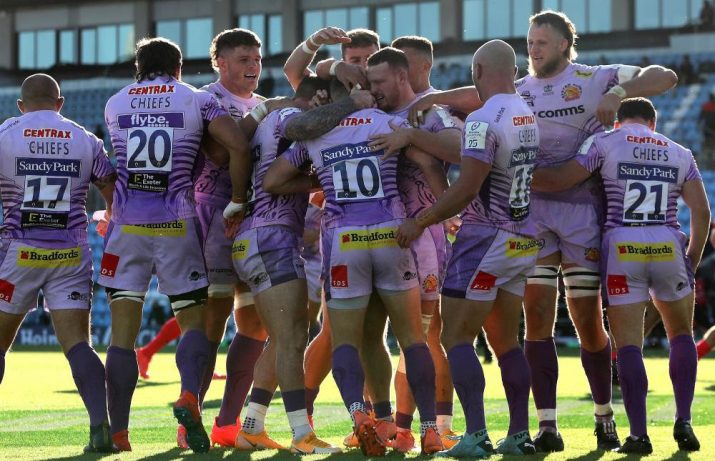 Earlier this week authorities in the Bouches-du-Rhône department granted EPCR permission to sell 1,000 tickets for the match in Aix-en-Provence. However, the Champions Cup final in Bristol will take place behind closed doors. Both are a far cry from the record Heineken Champions Cup final attendance of 81,774 at Twickenham Stadium in 2012, when Leinster overcame Ulster in an all-Ireland affair.

The two finals were originally scheduled to take place back-to-back in Marseilles in May but were postponed due to the many uncertainties created by the COVID-19 pandemic. EPCR and the local organising committee then decided that insufficient safeguards were in place for all stakeholders during the public health crisis to stage two high-profile matches at the 67,000-capacity Stade Vélodrome.

Instead, EPCR worked with its shareholder leagues and unions to secure alternative venues for the two finals, with the objective to limit travel to the greatest possible extent.

As part of an adjustment to future planning, EPCR has also confirmed that Marseille will now host the 2021 Heineken Champions Cup and Challenge Cup finals at the Stade Vélodrome on the weekend of 21/22 May, and that the matches at the Tottenham Hotspur Stadium in London will be rescheduled for 2022.

Producing a European final with half the people in the compound

We may be in a ‘new normal’ now, but nothing is really normal as BT Sport prepares its coverage of Saturday’s final in Bristol with Sunset+Vine and Telegenic. However, the rapid evolution of BT Sport’s distributed remote production model since the re-start of live sport in May has been carried through to the production plan for Ashton Gate this weekend.

“To give you some context,” Sunset+Vine executive producer for BT Sport Titus Hill told SVG Europe, “last season we did the final at Newcastle and we had 26 cameras, two scanners, seven EVS machines and 148 people on-site.

“It was always the plan with BT Sport for us to go remote for next season, for reasons of sustainability. This was brought forward with the coronavirus crisis, and we’ve had to limit people on-site as much as possible. 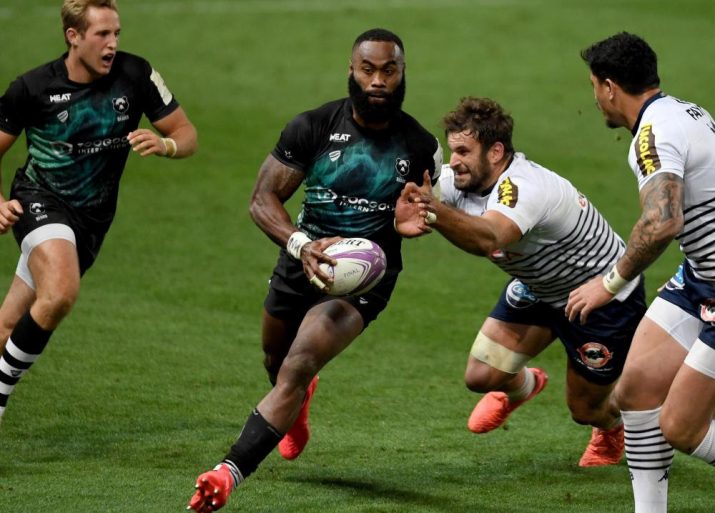 “Last year we had 148 people: this year we’ve got 78 people on-site, so it has almost halved. We’ll have presentation on-site, cameras, our sound team and we also need a graphics van so it can get connectivity with the match clock inside the stadium. Everything else will be remote from Telegenic’s ROC in High Wycombe.”

“Week in and week out now, whether it’s Premier League, Champions League or our rugby, this is our operating model,” added BT Sport COO Jamie Hindhaugh. “Moving forward we will stay remote: there’s no two ways about it, especially from the sustainability aspect as well where it is halving our footprint, which is really important.

“It is starting to give us new creative opportunities, as we look at how we work in the future. The biggest challenge is making sure we have the right connectivity in place at the venues. That’s the biggest challenge for us. We’re working with 4G now, but 5G with network slicing is around the corner.

“Planning maybe takes a little longer than it used to, but we’re now doing multiple Premier League games, as you know, and the Champions League group stages come back next week and we will be managing all of that with a remote approach.

“I’m really proud that the audiences are seeing no impact. It’s keeping people safe; it’s enhancing our creativity; better work-life balance; and increasing our sustainability. There are so many pluses.

“My job is to keep listening, to ensure we are finding better ways or smoother ways. Some of the ways of working would not be preferred: but as long as we’re listening, adapting and enhancing the experience then I think it will continue to be a real success,” said Hindhaugh.

“Moving forward we will stay remote: there’s no two ways about it, especially from the sustainability aspect as well where it is halving our footprint” – Jamie Hindhaugh

The Champions Cup final will be a 4K HDR production, and due to all the limitations around both COVID-19 and connectivity there will be 20 cameras deployed for coverage. The team will use 14 tie lines, mainly by regular fibre connectivity supplier BT Media & Broadcast and supplemented by NEP Connect fibre, to deliver camera feeds from Bristol to the Telegenic ROC where they will be split up for the director’s monitor stack, EVS replay team and graphics.

“We feel that 20 cameras is the maximum we can do,” said Hill. “It obviously means there are more individual camera angles on each screen than there might have been otherwise. It’s playing that game of what you can get back and still see well enough to be able to direct everything remotely.”

Enhancing coverage will be an Eaglecam supplied by the Spidercam team, and a drone controlled by Batcam operators.

“All grounds now have their red, amber and green zones,” said Hill. “In Bristol anything on the pitch side of the stands is actually red zone, meaning we can’t get our presentation into those areas.

“We’ll be able to get our reporter there to speak to the coaches and players, and we’ve built a platform for our presentation in the stand so we can get a one-plus-three: presenter Craig Doyle with Lawrence Dallaglio, Brian O’Driscoll and Ugo Monye. Commentary will be done separately upstairs.

“For the final we’ve managed to get a couple more people into the red zone. We’ll have our match floor manager, who has been on the testing programme since we re-started. They liaise with officials and team coaches to get players in and out – and they actually can’t come to the compound. There are different entrances for red zone and amber zone.

“And for this weekend we’ve come to an agreement with EPCR to also get one of our handheld camera operators on the testing programme so they can be on the pitch at the end of the match to get some extra shots including the trophy lift.

“The whole time you are balancing the desire to get the best coverage and the best shots with wanting to keep everyone as safe as possible. You are also trying to keep the optics good, so that on-screen you are seen to be clearly keeping your distance from each other,” he said.

The BT Sport and Sunset+Vine rugby production team works with sound designer and engineer Paul Lane to build sound beds for augmented audio in the absence of live crowds.

“Generally in the Premiership, say Wasps vs Bristol, we’ll take a couple of previous games and put together a general bed of crowd noise and then build separate beds of one or other team attacking, a try being scored, a controversial decision, half time, full time and so on,” said Hill.

“We add those extra beds as required as things happen in the match. On top of that we still have mics on the referee and assistant referees and mics in stands around the pitch to pick up noise around the stadium. We can still hear the referee; we just have to mix it in against the crowd effects. 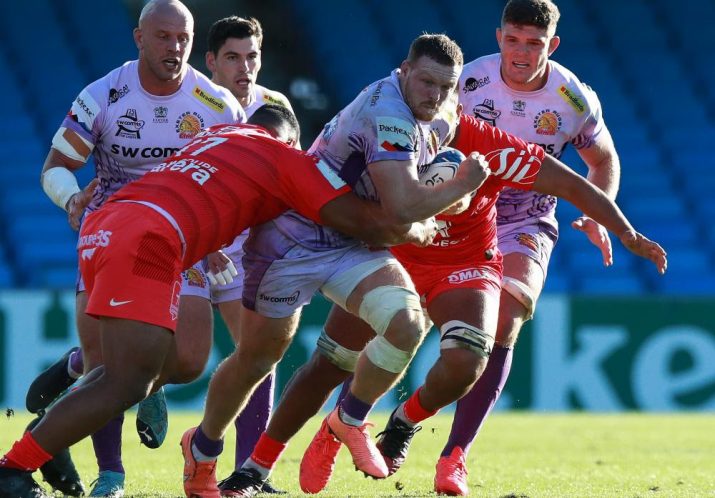 The enforced new normal demands alternative operation, creativity, flexibility, discipline and a completely different concept of teamwork in live TV production. Sports broadcast producers have found ways through to pandemic-era production but it is undoubtedly challenging for everyone involved.

“I think the biggest challenge is the cultural aspect, the people,” said Hindhaugh. “Traditionally we’ve always done things in a certain way.

“Does the match director, for instance, need to be in the car park in a compound beside the venue? No. Would they prefer to be? Probably yes.

“It’s changing over time. There are not many good things with this pandemic, but this period has helped us with that cultural and philosophical approach – because there is no choice, to be candid. If you look at what’s still happening at the moment, it’s not getting any easier, is it?

“Rugby has been challenging, and credit to Titus and the Sunset+Vine team. This is the strength of BT Sport, in our relationships with the likes of Telegenic, Timeline and Sunset+Vine and our other partners.

“It’s about everyone pulling together in the same direction. I’m forever impressed with that can-do attitude, as opposed to ‘this is too difficult’. So as long as I keep listening to that and enabling it, I think we’re going in the right direction.”

“From a Sunset+Vine perspective it’s been brilliant to have BT Sport pushing us to work with new technologies,” added Hill.

“Naturally, as a production company, we have certain ways of doing things and we like those ways. This takes us out of our comfort zone.

“Yes it has meant more work. Since the re-start we’ve had to go to each rugby ground again and it’s like starting from scratch: there are areas you can’t go in stadiums and you can’t use certain cameras.

“Rugby grounds are much smaller than football grounds – and if some fans start coming back we’ll have to change things again. We must constantly re-invent the way we do things. But it’s great to be showing live sport; it’s great to be thrown challenges and to come up with ways of overcoming them.

“And at the forefront has got to be the storytelling, the editorial of live television production — and making sure that with everything we do, that still remains at the heart of it all,” said Hill.

The Challenge Cup final between Bristol Bears and RC Toulon takes place today (Friday 16 October 2020) and is live on FR 4, beIN Sports and BT Sport. Exeter Chiefs versus Racing 92 in the Champions Cup final is live on BT Sport, Channel 4 and Virgin Media in the UK and FR 2 and beIN Sports tomorrow (Saturday 17 October 2020) with a 16:45 kick-off.