Annual global sports championship SailGP has stated that it used an ambitious remote production strategy for delivery of the world feed at its world premiere event in Sydney in February this year. 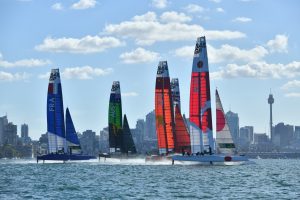 The nature of the new sport, featuring supercharged F50 catamarans engineered for intense racing at electrifying speeds, meant that capturing the world’s fastest race boats and the athletes piloting them was going to be challenging, and required an innovative solution.

SailGP worked with Whisper Films to create the world feed, which used drones and patented LiveLineFx technology to deliver impactful on-screen graphics, as well as information derived from a total of 1,200 sensors placed on the boats and athletes.

With support from SailGP Global Partner Oracle, 20 RF and agile onboard camera feeds and four independent, tailored LiveLineFx graphic feeds were sent from Sydney to London. Alongside the individual camera feeds, 24 separate audio sources from the athletes on the water and the presenters onshore were sent through the broadcast compound on Sydney Harbour, then 10,000 miles to a production facility in London.

In London at the centralised production facility, a team of 70 people worked across four control rooms to produce six feeds for television and OTT platforms. These were cut live and distributed in three languages: English, Japanese and Mandarin. Content was also supplied to the SailGP mobile application and used to support broadcast partners with specific and unique camera angles.

“This was a very ambitious project and we really pushed the boundaries of what is possible with remote production,” said SailGP CEO Russell Coutts. “We could have looked at having all of our resources on site but we knew that in order to have a model that could work around the globe at each event, ensure consistency, standardise our product and deliver the output required, remote production was the best solution. Thanks to innovation from Oracle and our partners, we were able to achieve a project of this scale starting with our first ever event.” 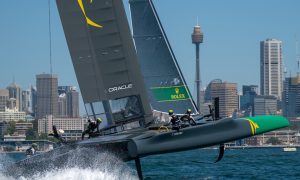 SailGP has broadcast agreements in place that span 91 countries across five continents. The next event in the SailGP calendar takes place in San Francisco on 4 and 5 May. The annual championship then moves to New York in June and Cowes (UK) in August, before culminating in a $1 million winner-takes-all race in Marseille, France, in September.

Added SailGP director of technology, Warren Jones: “We are delighted that we have not only launched a new sport, but we used the latest remote production trends to do it. At the start of this project, we looked at all the deliverables with our partners, and determined that this was the best solution to satisfy our broadcast partners, deliver a complementary, state-of-the-art app and make SailGP available to a wide range of people.”

Established in 2018 and headquartered in London and San Francisco, SailGP is an annual, global sports championship featuring bold, cutting edge technology and awe-inspiring athleticism. The fan-centric, inshore racing takes place in some of the most iconic harbours around the globe and culminates with a $1 million winner-takes-all match race.