The Canadian Football League’s season came to an end late November when the Calgary Stampeders defeated the Ottawa Redblacks 27-16 in the 106th Grey Cup in Edmonton, AB’s Commonwealth Stadium, broadcast nationally in Canada on TSN. 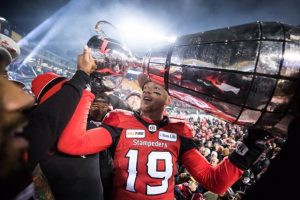 However, what Canadian football fans had enjoyed during one game a week all season was missing: miking on each team’s starting and backup quarterbacks and head coaches, the close-up sound that has become integral to NFL broadcasts and to those of most other major-league sports on television. That, however, was the plan for the Grey Cup all along.

“We never had plans to use it this year during playoffs or Grey Cup,” said Paul Graham, VP/EP, TSN. “Our existing agreement with the league and the CFLPA [player’s agreement] called for 18 weeks of regular season, one game per week. We skip the first two weeks and end a week before playoffs. The idea was to give teams the first couple of weeks to get some rhythm and to stop a week before so they could focus on playoffs.”

This story first appeared on Sports Video Group US. To read more, go to: https://www.sportsvideo.org/2018/11/27/rf-wireless-systems-kept-cfl-sound-up-close-and-personal-this-season/