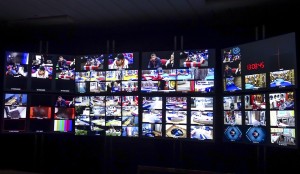 “For Gran Hermano VIP, we had fairly complex networking requirements. The network topology had to handle all of the inputs and outputs needed to put on a show with multiple cast members moving from room to room. We also needed a single system from which we could sync all cameras,” said José Luis Gacal, Technical Director at Zeppelintv. “After our experience with Riedel MediorNet on another production last year, we knew it could provide the flexibility, reliability, and ease of operation we needed for this show. We also appreciate the modularity of MediorNet, which means we can repurpose the components and reconfigure the network for different types of productions.”

Gran Hermano VIP follows the same formula as the Big Brother programems in dozens of other countries, which has a group of contestants or housemates living together in a specially constructed house that is isolated from the outside world. The twist with Gran Hermano VIP is that the contestants are well-known Spanish celebrities. During their stay in the Gran Hermano VIP House, contestants are continuously monitored by live television cameras and various microphones.

The MediorNet Compact Pro and MicroN frames are placed in five strategic locations throughout the Gran Hermano VIP House to collect signals from all 70 camera sources. The MicroN devices are able to multiplex camera signals along with PAN/TILT and camera control data and deliver them to the machine room over a few 10G fibre links, a task that would otherwise require a large and heavy bundle of copper cabling. The MediorNet network also serves as the audio router, with audio channels coming from the four mixing consoles via MADI interfaces. In addition, the Gran Hermano VIP production is using Riedel’s RockNet real-time audio network devices to provide additional analogue audio inputs and outputs.

In the machine room, one MetroN frame provides routing for all fibre links and outputs the signals to the vision mixer. The second MetroN acts as a backup, providing full redundancy. Redundancy is also built into the network through dual fiber paths, with one set of fibres in the suspended ceiling and the other underground. This setup gives MediorNet the ability to reroute signals in the event of a network error.