Right on Cue: How IMG is framing the 2018 World Snooker Championship 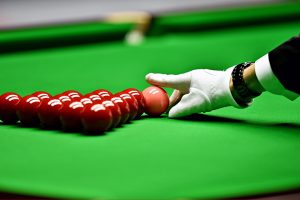 Executive producer Alison Witkover outlines how the production team from IMG Media brings the World Snooker Championship to TV screens and details some innovations being introduced for the first time this year.

The World Snooker Championships is the richest and most prestigious tournament in snooker.

You don’t need SVG to remind you, for example, about Dennis Taylor beating Steve Davis 18-17 in the 1985 final with the last black of the last frame.

It is one of the UK’s most famous sporting moments ever, watched by a British TV audience of 18.5 million people.

This year’s tournament might not get those sorts of ratings figures but the World Championships is still as important as ever.

And, from the TV production perspective, there will be new innovations on show.

Taking place at Sheffield’s Crucible Theatre, which has been its home since 1977, the two- week tournament features the 32 best players in the world.

Mark Selby is the defending champion, having beaten John Higgins by 18 frames to 15 in the 2017 final to retain his title.

Coverage of the tournament is produced by IMG and broadcast live on the BBC and Eurosport.

For the early rounds, when two matches take place at the same time, there are nine cameras on each table plus a shared beauty shot.

An overhead hothead is also used on Table 1 and a jimmy jib is brought in for the last three days, including the final.

The number of cameras then increases to 12 for the final itself. Among the additions is a hi-motion camera, a Sony 4300 operating in its six-speed mode for replays. This particular camera is being utilised for the first time at this year’s World Championships.

Having produced the snooker for BBC for 20 years, we have fine-tuned the number of production and OB personnel required for the various programmes to produce the best possible programmes within budget

“AR offers a variety of statistics and the ability for the table to be viewed from multiple angles, as well as showing other shots that could have been played. A feed of the main camera is also provided to the match referee so that balls can be re-spotted precisely following a foul stroke.

“The AR team works all-year round on snooker events, so are continuously developing their product to offer more statistics,” she adds.

Of course, statistics play a big part in snooker and this is reflected in the coverage. The on-screen graphics provide all scoring data including average shot time, safety success, long pot percentages and high breaks, to name but a few.

Along with the high motion camera, 2018 also sees the introduction of a new editing set-up through IMG’s OB provider for the tournament NEP.

“After observing and reviewing our edit practices at the first two events of the season, NEP is introducing a new state of the art 10 Gbps editing system,” says Witkover. “This includes sophisticated media management and ingest tools and will start the process of integrated logging and browsing tools.”

One thing we won’t be seeing this year, however, is a referee camera, she adds.

“We did some trials at the UK Championship in York, but we, and the governing body, are keen to do further testing outside of a major event before consider its value to the coverage.”

While technology can solve some production problems, time and space are among the biggest challenges faced by the production team during the World Championship.

Matches are long so, for the director and technical crew, in particular, maintaining concentration for hours at a time is vital.

Similarly, keeping quality levels high throughout the 17 days of competition, and the circa 150 hours of terrestrial television, is another challenge. Coverage starts at 10 am most mornings, transmits on and off throughout the day, and the team can be working until well past midnight.

“Having produced the snooker for BBC for 20 years, we have fine-tuned the number of production and OB personnel required for the various programmes to produce the best possible programmes within budget,” says Witkover.

Space is at a premium too, particularly at the Crucible where two tables are in operation in a very confined area.

“Working in an area that’s very small presents a major challenge for camera operators,” she continues. “The cameramen and women have to work in very close proximity to the players and move around them as they play. For this reason, we have built up a team of experienced camera operators who understand the game and are known and trusted by the players.

One of the key components of the IMG coverage is the feature VTs that are run during and around the live coverage. These profile players and give a real-life insight into their lives, the sport and the competition.

With qualifying for the final 16 of the 32 places only finishing three days before the tournament, and the draw happening a mere two days before it, these leaves little time for the team to prepare the features on these players. Witkover has a workaround.

“We concentrate initially on producing a variety of features on the top players, allowing us more time to concentrate on the qualifiers once on-site,” she says.

Another key consideration for IMG is the need to bring variety to the presentation, adding light and shade to the 17 days of green baize action.

To achieve this, each programme has a different style. The morning shows are presented from the practice room with a focus on the live sport. The afternoons of days one to 12 are then presented from the Winter Gardens studio which is built specially for the World Championship.

“Here, we can intersperse the snooker with live demos, features and guests to really bring the event to life” explains Witkover.

Early evening programmes have a small studio set within the practice room, enabling viewers to see what goes on behind the scenes and, often, what the players work on in their mid-session intervals.

For the last five days, the main studio moves to within the Crucible Theatre, with a view over the table. This space is only available once Table 2 has been dismantled and the venue re-rigged for the semis and final.

And it is here that snooker, and sporting, history can be made.

Live coverage of the World Snooker Championship is available on the BBC from Saturday 21 April until Sunday 7 May across BBC1, BBC2, BBC Red Button, Connected TV, the BBC Sport website and the BBC mobile app.