Right On Cue: Preparing for BBC Sports Personality of the Year 2017 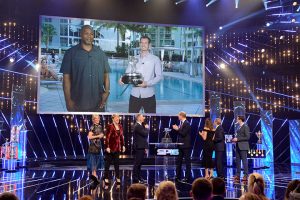 Now in its 64th year, BBC Sports Personality of the Year (SPOTY) is a key date in the sporting calendar, even if it’s not actually a sports event.

A celebration of sporting achievements from the past year, it fuses award show and light entertainment programme, juxtaposing inspirational films and interviews with live music performances and, of course, the handing out of awards.

This year’s SPOTY takes place at the Echo Arena in Liverpool on Sunday 17 December. Presented by Gary Lineker, Clare Balding and Gabby Logan, it will include turns by Noel Gallagher’s High Flying Birds and Rag ‘n’ Bone Man.

As potential winners of the main award, it is likely that boxer Anthony Joshua and motor racing driver Lewis Hamilton will be the stars of the show, but one of the key protagonists behind-the-scenes will be the show’s director John L Spencer.

A hugely experienced multi-camera director, with credits that include The National TV Awards, Children in Need, The British Comedy Awards and The Last Leg, Spencer has been prepping for SPOTY since the spring.

Having relocated (temporarily) from London to Salford ahead of the show, he is leaving no stone unturned when it comes to being ready for the big night. 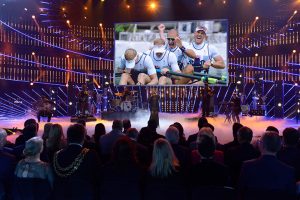 Which is no surprise when you consider that the main coverage will include 17 cameras, a 50 piece orchestra, potentially three live outside broadcasts and performances from some of the biggest names in pop music.

“SPOTY is a huge event with a lot of history so you feel incredibly protective towards it,” Spencer tells SVG Europe. “Every year the hope and expectation is to make it bigger and more exciting than before. So, no matter how well the previous year went, the hope isn’t to match that, it’s to beat it and to continue to make it a must-see show.

“We have more live music in this year’s show with Noel Gallagher’s High Flying Birds performing twice plus Rag N’ Bone Man and Rebecca Ferguson,” he continues. “The set is similar to last year but we have added extra staging to bring the orchestra more in vision than last year. Technically we have added some new cameras to the rig that will help me bring something new to the look of the show and the music.”

To ensure everything goes smoothly, Spencer will camera script every item “so everyone knows the look and the shots that are being planned.” Then, the day before the show, they will “rehearse with everyone all day, item by item, and then on the day itself do two full dress rehearsals so we are fully ready for the live transmission.” 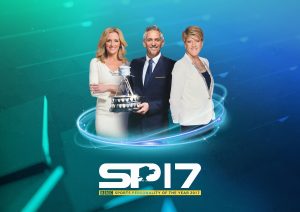 The person in charge of ensuring that the technology and facilities work is technical manager Jon Sweeney. He will be working with outside broadcast services provider CTV and RF camera company Broadcast RF on what is a fairly sizable HD production (see below).

With a string of major live TV events under his belt, and currently working on the huge set-up for the Winter Olympics, Sweeney has no major worries about SPOTY, although bad weather would cause problems, he admits, as it did in 2010 when snow prevented both sports stars and the audience from getting to the venue.

For Spencer, however, the big challenge is what he describes as the “huge variables” involved.

He says: “Although we have a fixed duration for the show, a lot of the major elements are incredibly flexible. It is impossible to know how long each award winner will talk for and they rarely speak for the exact amount of time we have allocated for them. If they talk for too long we have to look to drop something and similarly if they don’t talk for long enough time we are looking to add something. To get this huge show off air on time is a huge juggling act.”

The three OBs, should they be needed, will be single-camera, facilitated by local crew, accompanied by a BBC producer. Even though the votes will be cast on the night, the locations of the OBs are being kept secret ahead of the event so as not to give anything away. 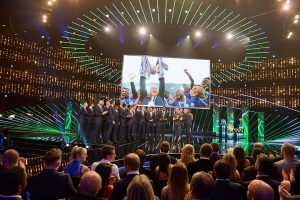 With such supreme planning, assuming the weather is kind and the speeches don’t go on too long, when the cameras roll on Sunday it should be all about the award winners.

And the last thing that Spencer will tell the crew before they go live? “Enjoy it! It’s a huge show so if you don’t enjoy this one, we are in the wrong job.”

Sports Personality of the Year – the nitty gritty

Sports Personality of the Year – VTs and pre-show preview