Passion for sport: Gemma Knight discusses her journey to becoming a director at BT Sport

A passion for sport, determination to climb the ladder, and accepting the need to work long, unsociable hours are a standard requirement for all working in sports broadcasting. Director Gemma Knight is no exception. This rising star is one of BT Sport’s junior directors, and over the course of her career at Sky Sport and BT Sport, she has used a dogged resolve to move forwards towards her ultimate goal of being a director. 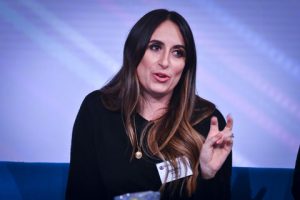 Knight was brought into BT Sport to work in its Champions League team, but since she began working for the broadcaster in 2015, while working primarily on the football team she also works on in-house productions including Speedway, hockey, including the 2018 Women’s Hockey World Cup, and other sports.

Going to the dogs

When Knight left school, all she wanted to do was work in film or TV. She went to the University of Bedfordshire to study Media Production with Video Production, but found getting work experience difficult. She says: “I was desperate to work in TV or film, but as everyone finds out at university, I found it hard to get work experience. I wrote hundreds of letters, and applied to Sky Sports, the BBC, ITV Sport and more.”

In the end, a personal family connection made the difference, although not in a nepotistic way. “My uncle was a greyhound trainer at Hove, and he said he’d look out for someone from Sky for me, as Sky looked after greyhound coverage at that time. He ended up having a really good dog, got interviewed by Sky about it, and got me a contact with Dave Lawrence, a Sky producer,” she comments. “I badgered Dave; he was a very nice man. He said he’d try and get me a couple of weeks work experience.”

By that time however, Knight had graduated and needed to work, so she took a job in media sales. She continues: “I took two weeks off work to have work experience at Sky. After that, I got offered one running shift on a Saturday. Then another came up mid week; I didn’t know if anything else would come up, but I took the plunge and left my media sales job. It’s very hard to get runners jobs at Sky, so I felt it was worth the risk.”

Taking that risk was a childhood dream; Knight is an only child and followed her dad’s love of sport growing up. She adds: “I wanted desperately to work in TV doing something I loved, something in music or sport. When the position came up at Sky Sports, I jumped at the chance. It was an opportunity I couldn’t miss.” 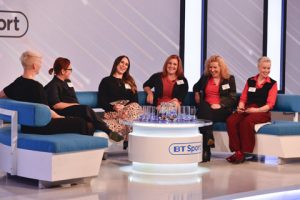 And so in 2005 Knight started out running across all sports at Sky Sports. Over the course of just one month her shifts built up to one and sometimes two shifts per day at Sky all in live studios, and she adds, “somehow a shift on Soccer Saturday came up, which was a great opportunity; runners could gather clips, research and help reporters, not just make the tea”.

She goes on: “So I started to get a little bit of editorial experience. Work built up really rapidly. As you meet people and prove you’re keen and good at the job, people ask you to work on their shows. Some people had been running for three or four years and hadn’t got the opportunities I’d been given in a month. I was coming in for Football First shifts finishing at midnight and then Goals on Sunday at 5am, so I was working long hours, but getting the experience I needed.”

Finally Knight got her chance to prove herself, compiling clips requested by the FA for the Kick it Out Campaign. Andy Melvin, then head of football at Sky Sports, who retired as deputy managing director in 2013 after 22 years at the operator, who, says Knight, “was notorious for being an important and scary man,” had made the request and Knight ended up tasked with the job.

She says: “This was my opportunity to get on his radar. I took the clips from the previous weekend’s football and made them as neat and professional as possible. A few days later, the production assistant that looked after the football team pulled me aside and said, “You must have done something right because Andy wants you to take a full time job on the football team”.”

Knight started work as an editorial assistant and then assistant producer in a pool of about 40 people, of which she was the only female. “It was just the way it was at Sky at the time,” she says, “and it was the same the whole time I was there, which ended up being for almost 10 years. There were production assistants and production managers who were often female, but in football, all editorial staff, producers, directors and assistant producers were all male.”

A decade on and Knight left Sky Sports as an assistant producer. “There was no structure for career progression there at the time, because people just didn’t leave, and I wanted progression. Assistant producer covered a wide range of tasks and the role did grow as you progressed. I eventually got the opportunity to work on live outside broadcasting doing VT replay match co -ord work, and realised this was where I wanted to be long term, on live Football. After eight or so years at Sky Sports, it became apparent I’d done everything I could and needed to explore pastures new.”

At that point a freelancer suggested that Knight speak to BT Sport. She spoke to BT Sport’s head of live football, Stephen Cook, and started working at BT Sport in 2015 as a producer. Knight explains what the broadcaster was like back then, just two years into its existence: “I was part of a really new team setting up a TV production arm inhouse. My role was to ultimately direct, but I started off as the main match replay co-ord on Champions League. In the first year, we were such a new team I did the majority of the replay co-ording in our most high profile games, selecting the replays that go to air, editorially clearing up incidents that happen in a match; it’s the step before directing.” 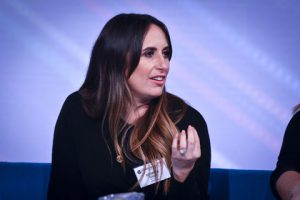 After a season as a match replay co-ord, Knight faced challenges in her personal life that meant she took a year out; she had her first child, and at the same time, her mother was diagnosed with terminal cancer. “When my mum died, I came back to BT Sport to rebuild my career, with a new sense of focus. Before, I did love my career but I always wanted to direct, however there was a hole beneath me in co-ording that needed filling, so I filled it; when I went back, I started focusing on bringing people through with me, nurturing assistant producers in the team so they could take my job and do the bigger games, so I could move on.”

She adds: “BT Sport is really good at facilitating these things. It’s refreshing and so good for people at making opportunities, especially people who are up and coming, as they give you that chance.”

Absorbing from the best

Knight states that training for work on OBs is all done on the job, which while lacking structure, does work well. “In TV sport, nothing is structured; you just get thrown in which can actually be the best way to learn. But you’re surrounded by people who are really good at their jobs and know football broadcast, so you absorb from them. If you ask for help they will help and guide you. TV and technology changes all the time so on the job training really works; it worked for me, so I wanted to help other people the same way.”

When Knight noticed that BT Sport was struggling to find EVS operators, she asked her boss, director of production Fergus Garber, to set up an inhouse course on EVS operation. This very basic EVS course covers one day’s training per week over four to five weeks for in-house members of staff, and has been a great success in covering that gap in operations, states Knight.

“That really differentiates BT Sport,” comments Knight, referring to the ease at which BT Sport was willing to commit to setting up the EVS course. “It’s a young, really keen group of people that work hard and want to make football coverage exciting and fresh.”

2018 has been a great year for Knight. Since the beginning of the season this year she has been directing on The Champions League Goals Show, as well as directing all FA Women’s Super League (WSL) matches, England under 21’s men’s games, the England Women’s Internationals and some FA Cup men’s matches.

She comments: “Getting to direct the matches as a woman was a huge deal for me, as there is only one other established female match director in the country so it’s a great achievement.” She also directed presentation on her first Premier League Game recently Leicester, another milestone, and directed the matches in the EE Cup, which was the first sports broadcast over 5G shown on Youtube.

She comments on WSL, where she is providing a production point of view in the remote production project on BT Sport COO Jamie Hindhaugh’s technical team, which is looking to increase the league’s coverage: “With WSL it’s a bit of a transitional period for us at the moment, but we have ideas on how we can help push the WSL coverage, with opportunities to explore remote production; the WSL and National League is where we see that fitting in really well, and with remote broadcast we can afford to cover a lot more matches which brings more football to the viewers.” The team had its first remote broadcast on the WSL recently in the Manchester City V Birmingham match, which was a great success.

The football team at BT Sport today consists of 16 people, three of whom are women, says Knight. There are three male producers, three directors – one of which is a woman – and around 10 assistant producers, of which two are women. “That’s still not representative, but it will change and it is important it changes,” says Knight.

Yet she adds that the women that come into the football broadcast game need to understand what they are getting into: “It’s important we bring more women into football, but they need to really want to work in football and love the sport; sport broadcast is long, unsociable hours and a passion for the sport is therefore imperative.”

In conclusion, Knight says of her career as a woman in an area of sports broadcast typically governed by men: “My experience is unique because it’s in football; it’s always the most male dominated area of broadcast because it’s the male sport. But what we’re seeing is the women’s game is coming through, so you’re seeing a change in that dynamic on and off the screen.

“For me it wasn’t always easy at the time; being a woman in a male environment meant it felt like I had to work twice as hard to get half as far. But I’m a fighter and I did work hard, and worked hard to be seen as equal to everyone else. Inevitably, where things are male dominated, it isn’t necessarily an easy ride, but it’s paid off. Exciting times are ahead and it’s an exiting time to be a woman in sport.”