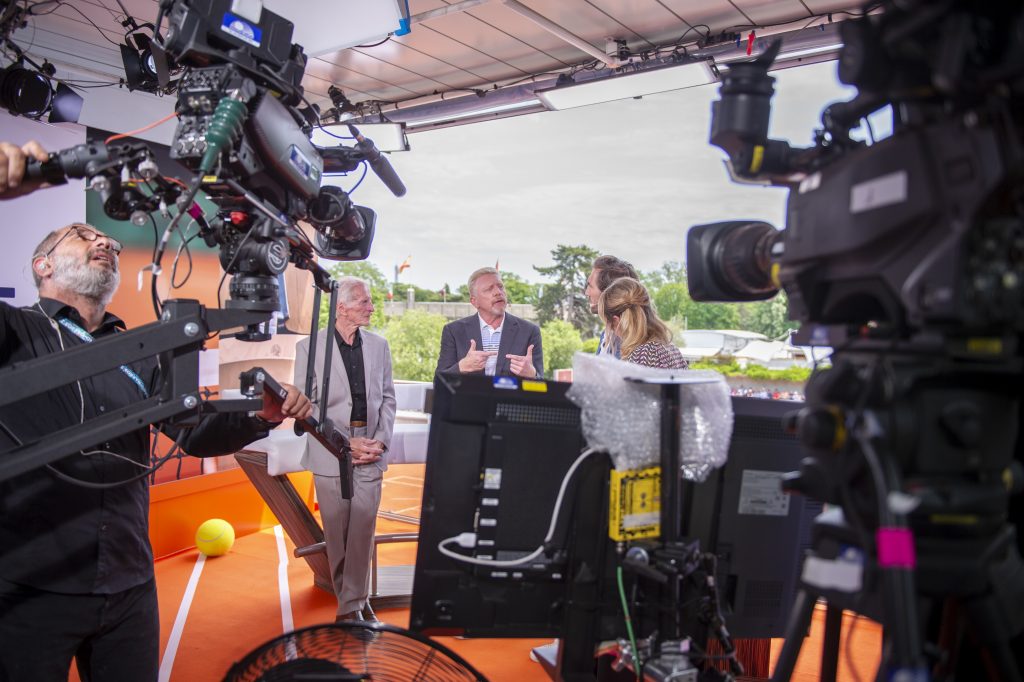 The Roland Garros French Open tournament in Paris is set to offer tennis fans a matchup for the ages when Roger Federer and Rafael Nadal square off in one of the men’s semi-final matches this afternoon and Eurosport, with broadcast rights in more than 50 territories, has been on hand to make sure that match and all the matches resonate with viewers across Europe.

This is the 31st consecutive Roland Garros tournament that Eurosport has delivered and there are more than 200 staff on site producing coverage for 10 localised Eurosport versions distributed across the continent.

When the final point is one on Sunday (9 June 2019) the channel will have delivered every minute of more than 600 matches live. Coverage from all 16 courts (as well as all 160 qualifying matches) were produced and available via the Eurosport Player.

“We want our coverage to entertain fans and we do that by creating content and programming that engages viewers, making Eurosport their tennis channel of choice. Our relaxed presentation style is intended to be a mix of fun, informative content and in-depth analysis.”

With Eurosport’s main production facility located in Paris (and relatively close to Roland Garros, home of the French Open) it’s no surprise that the European sports powerhouse is looking to leverage its own facilities as much as possible. Last year the broadcaster brought back a finished feed and then integrated it for playout but this year all camera signals are coming back alongside the host feed and being cut from control rooms there. Gordon Castle, Eurosport, SVP, technology and operations, says it is all part of a continued move towards remote production. 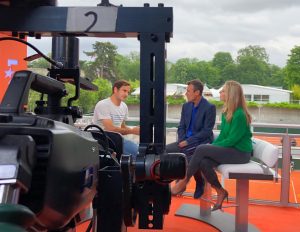 Two studios at Roland-Garros give the Eurosport production teams options to best meet their needs.

“As we move to more remote mixing, we have a control room and two studios on site at Roland Garros but also control rooms at Eurosport in Paris and in the UK,” he says.

“We share the on-site studios and camera position so that we can do a main show as well as shows for the French, German, and British channels.”

The team at Roland Garros has 14 unilateral cameras in use to cover activities across the grounds and on-site there are teams from Eurosport France, Germany, Norway, Spain, the UK, Russia, and Italy.

“We want our coverage to entertain fans and we do that by creating content and programming that engages viewers, making Eurosport their tennis channel of choice,” he says. “Our relaxed presentation style is intended to be a mix of fun, informative content and in-depth analysis.”

The German and French versions of Eurosport’s Roland Garros coverage is being produced out of Eurosport’s Paris facility, while the UK channel is produced in London. Once signals are back at Eurosport they are available to any Discovery property via Discovery’s wide area network. 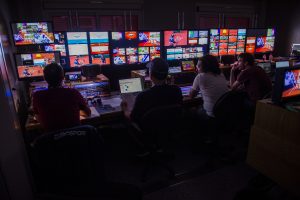 One of Eurosport’s control rooms that are in use for Roland-Garros.

“We try to put as multicast signals up so that anyone can pick them up,” says Castle. “There is even great access to content back in the U.S.”

Two studios and a control room on site at Roland Garros give the production teams flexibility so that the different production teams can best meet the needs of viewers back home. But the nature of tennis, with up to 16 courts in use simultaneously, matches that don’t have a defined end time, and the unpredictability of weather, make it a complex scheduling challenge.

“And then when you are scheduling programming across 22 languages and the need to do localisation – it become a complex puzzle,” says Castle. “I am amazed how we can have all of the events with commentary in so many languages.”

The Paris facility has 14 control rooms and a studio, and all of those resources give the team a chance to leverage them and use them to integrate things like virtual and actual reality elements originating from Roland Garros and Eurosport.

“We want to get the technology out of the critical path so that the production and operations teams make the key decisions.”

“There can be less people on site, but it is really about better access to content,” says Castle. “Yes, efficiency is important but remote production also improves the quality because you have access to more content and that is important for our digital properties. Our main facility is a big content hub where content can immediately be repurposed for other services.”

One of those services is UHD with HDR which is available with four languages. There is one fully distributed UHD Eurosport channel in Russia and it is also being distributed in the UK, France, and Germany.

Eurosport continues to do more and more productions from its control rooms across Europe and the future promises some exciting developments like the move to virtualised hardware and the use of private clouds. The goal will be to create technical backends that can be tied to control room front ends so that control rooms and the technical tools that they rely on can be dynamically scaled up and down for a production.

“We want to get the technology out of the critical path so that the production and operations teams make the key decisions,” says Castle.